It Takes A Smart Man to Make A Stupid Terrorist 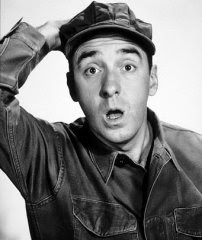 This weekend the talking head were really on their game. The game I am talking of is called denying that al Qaeda or Iran had anything to do with the incidents in Britain this weekend because they were so clumsily done. Excuse me for asking but dont you think that someone like Albert Einstein or Steven Hawking would be too SMART to kill themselves and others? Who is more likely to strap on an explosives belt a genius or the terrorist version of Gomer Pyle. The Smart guys realize that if this 72 virgins thing was so good, then why are the Imams who promote it in their mosques still around? If killing yourself was just so dammed good, how come the responsibilities fall to the bottom of the Islamic food chain.

So the pundits are wrong again. The fools aren’t the ones planning the terrorism …they are the ones executing it. As Michael Leeden said in today’s NRO Online:

“Stupid Terrorist” Is it any surprise?

Many commentators have unburdened themselves of the observation that the British terrorists don’t seem very smart. Or technologically ept. They failed to blow themselves up in London, despite having lots of martyrdom gear. They failed to crash through barricades at Glasgow Airport, and you’d think they might have noticed the obstacles. Beloved Allahpundit remarks, in response to stories suggesting that the failed terrorists came from al Qaeda and received guidance from Iran, that “a joint AQ-Iran operation would have run a lot more smoothly and packed a considerably bigger wallop that these attacks did.”

Did you really expect high-I.Q. martyrs? Maybe clever killers, but somebody should have pointed out — long since — that it isn’t very smart to blow yourself up. And for the most part, the martyrs haven’t come from the best-educated sectors of the population. But so many scribblers have been impressed by the deep faith of the suiciders, that they’ve shied away from this fairly obvious point. And one could go further. Indeed one should go further: All those parents and siblings who speak with reverence of their exploded child or brother or sister or cousin or uncle, they should be ashamed of themselves. Because they’re fools.

And their leaders, who play them for fools, know it and delight in that knowledge. No terrorist leader has ever blown himself up. No way, that’s not their job. Their job is to get other people to blow themselves up. The leader sends them to die, and pays off the family, having done whatever it takes to convince the martyr-to-be to go through with it. Which isn’t always so easy, by the way. There are abundant stories about martyrs taking drugs before and during the Great Day of the Virgin Orgy. There are slightly less-abundant stories about martyrs having been chained to their car bombs, and there are plenty of stories from Iraq — broadcast throughout the Middle East, but so far as I know not over here — about jihadis ordered to drive explosives-laden vehicles to point X, having been assured it’s perfectly safe, only to have the thing blow up before they leave. They were scheduled to have been martyred by their leaders — the smart guys — and their families back home in Saudi or Yemen or North Africa were told that they sacrificed themselves for The Cause. Unfortunately for the template, some of them survived and bitterly told their stories. And remember that several — perhaps most — of the 9/11 terrorists were not told that day would be their last.

My Iranian friends delight in these operations, which they see as a double delight: some of our guys get killed, mayhem is visited upon our allies in Iraq or Afghanistan or India, etc., and it’s all done by some stupid Arab (the mullahs have a dim view of Arabs). You may have noticed that there haven’t been many Iranian martyrs in Iraq. Yes, there have been martyr recruitment campaigns around Iran, and tens of thousands have signed up, but the “volunteers” are unlikely to have volunteered, and so far as I know they haven’t shown up to challenge the surge. Accounts of Iranian martyrs in the war against us are just not there. Debka claims that “contingents of Revolutionary Guards Corps of suicide fighters” have been deployed to southern Iraq. I don’t believe it (I rarely believe Debka). The IRGC forces kill others, not themselves. The British press was almost certainly more accurate when they reported that Iranian helicopters had carried terrorists into southern Iraq. No surprise there.

Which takes me back to the British terrorists. You may recall that the last time around (some date with a “7” in it, wasn’t it?), there were explosives that failed to detonate, terrorists who hightailed it away from their mission, and cars were found with explosives in them. Just like now. It’s not rare; it’s quite common. If you ask our military guys in Iraq how this compares with their experience, they’ll tell you that plenty of IEDs fail to go off, and that suicide belts often misfunction. Sometimes the martyr-to-be has (second? first?) thoughts and runs off.

The theory that “it couldn’t have been al Qaeda and Iran because they’re too smart for this sort of buffoonery” doesn’t stand up. Al Qaeda is not the SAS, their fighters wouldn’t pass the physical, and they’d probably be rejected on the grounds that they’re not very good at thinking clearly under pressure and can’t adapt to changing circumstances. And as for Iran, there seems to be a shortage of high I.Q. atop the mullahcracy, doesn’t there? Only a totally incompetent leadership could have so thoroughly wrecked the country. Gasoline shortages in a country with all that petroleum? Breathtaking stupidity. The suicide terrorists’ competitive advantages to date have been basically two: there’s lots of them, so even if many of them fail, a few succeed and kill lots of people. Second, they’ve got a great theme song, and their brand has sold well.

There are other reasons for their ongoing failures, of which the most important is undoubtedly their declining success in Iraq. Lots of believers raced to join the jihad when it looked like the winning horse, but no one this side of Big John Murtha believes they’re on top in either Iraq or Afghanistan. They announced a big Spring offensive in Afghanistan, and instead they’ve lost hundreds of men. Their ranks have been decimated in Iraq, and they’ve lost Anbar Province, which deprives them of a comfortable environment in the Euphrates Valley, through which they have long infiltrated their killers from Syrian bases. And they’ve lost a lot of their top personnel. Some have been killed or captured, others — including Revolutionary Guards officers — have defected. Their main man in Iraq, Moqtada al Sadr, just denounced Iran — his source of money and prestige — for supporting al Qaeda. Most likely they fired him and he’s trying to remake himself as a thoughtful patriot instead of a foreign-supported crazy man, but his Mahdi army is not the menace it used to be, and one will get you eight that lots of his guys aren’t reupping.

In short, clear-eyed young men, even those obsessed with the dream of killing an infidel and burdened with the I.Q. of a blonde heiress, are not as enthusiastic as they once were to sign up for the big slaughter in Iraq.

On the other side, we’re learning, and we’re slowly improving. That’s our M.O., by the way; it’s what we did in the First and Second World Wars. The happy result is that it’s getting harder and harder to be a terrorist. Not that we’re perfect, by any means. It seems that the guy who drove the silver Mercedes in front of that night spot in London was in jail not so long ago, suspected of being a member of the group that planned to set off similar bombs in London, New York, Newark, and Washington. They let him go, but fortunately he failed — just how, we don’t yet know — and ran away.

Again, nothing new. It shouldn’t surprise us.

That said, they don’t have to be great, they only have to be lucky from time to time, and they are tenacious. For all their blunders, they seem to have planned a sequence of terror attacks in London and Scotland, and are undoubtedly planning others there and elsewhere. It’s highly unlikely they will always fail (nobody’s perfect, after all). But smart people don’t sign up for suicide missions. It takes a fool.

Video of the Day: Lyin’ Joe Biden Claims He Got To The Senate ‘180 Years Ago’
September 27th, 2020 Conservative Firing Line
Thanks for sharing!
We invite you to become a Lid insider. Sign up for our free email newsletter, and we'll make sure to keep you in the loop.
Send this to a friend