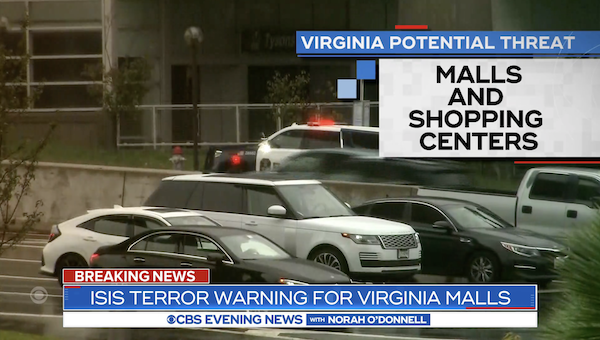 Virginia police ramped up their presence at shopping malls, busy roads, and transit areas in response to an ISIS threat over Halloween weekend. This action comes as top military leaders claimed that yes, ISIS-K and Al-Qaeda want to conduct “external” acts against the US, but so far cannot do so. That particular viewpoint remains to be seen. Fairfax County Police chief Kevin Davis says his officers will remain on high alert, possibly until after the gubernatorial election on Tuesday.

#ISIS threat in #WashingtonDC suburbs. Police are increasing their presence around shopping malls and high-volume roads and transit areas in response to a purported threat from ISIS this #Halloween weekend.

#ISIS threat in #WashingtonDC suburbs. Police are increasing their presence around shopping malls and high-volume roads and transit areas in response to a purported threat from ISIS this #Halloween weekend.
.@FairfaxCountyPD #Virginia #TerrorThreat pic.twitter.com/6UJzrkTJUZ

Per Catherine Herridge at CBS News

Police in Northern Virginia are on a heightened state of alert as a new law enforcement alert warned of a potential threat against malls and shopping centers located just outside of Washington, D.C. The threat originated with ISIS and is the basis for the alert, sources told CBS News.

“It’s just our responsibility to have a greater presence, to be more aware and to ask the community to have their eyes and ears peeled for suspicious activities,” Davis said.

The CBS article stated that ISIS has been more “active” since Biden’s Afghanistan bugout and that threats from terrorist groups are accelerating, according to military officials. Virginia police are aware that Lone Wolf attacks are always possible, regardless of the distance between terrorist groups and the United States. Arlington County Police Department and the Loudon County Sheriff’s Office said they hadn’t heard about any specific threats.

Human Events reporter Jack Posobiec wrote on Twitter that his sources told him that the threat was related to the Afghan Refugees. That report at this time is unconfirmed.

Thousands of Afghan refugees entered the country through Dulles Airport to be sent onward to several military bases for screening for background and health issues. Fort Lee and Fort Pickett (Central Virginia) and the Quantico Marine Base (Northern Virginia) are among those in Virginia. Reuters reported that around 700 refugees “independently left the military bases.” Virginia police will be watching, and hopefully, so will the public.