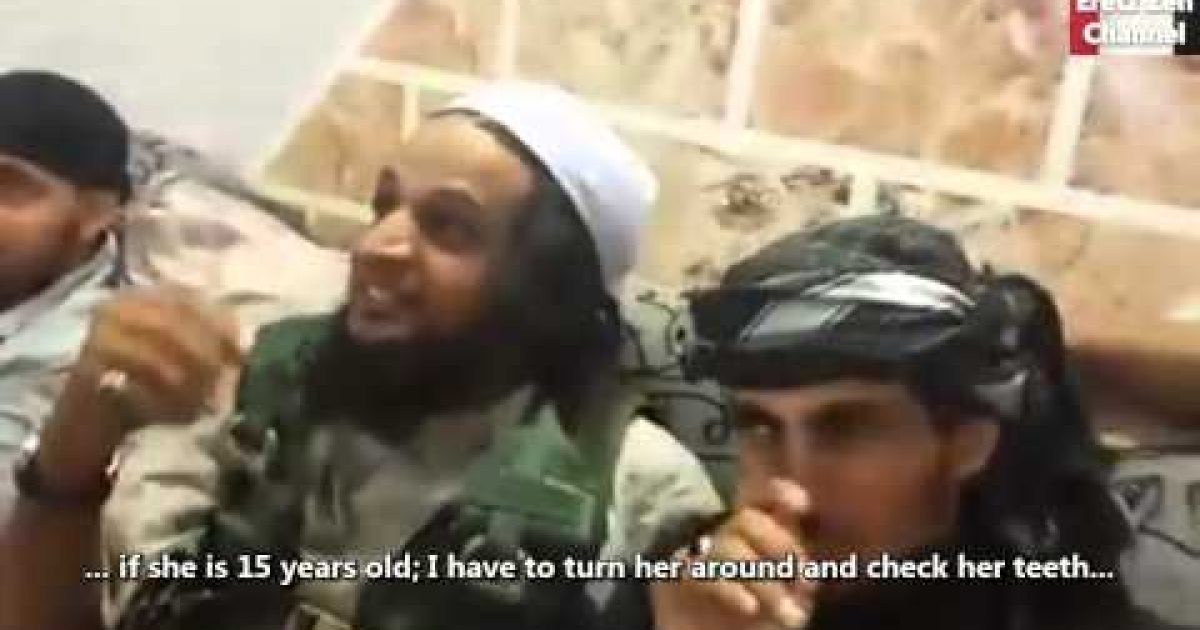 ISIS has released what CBS News has described as a “strict code of conduct in the matter of stealing young women and trading them like cattle for sexual gratification.”

The list of 27 rules translated by MEMRI (below) are set in a question and answer format. They were issued by Research and Fatwa Department of the Islamic State with a title that translates into “Questions and Answers on Taking Captives and Slaves.” MEMRI believes it was “released in response to the uproar caused by the many reports this summer that ISIS had taken Yazidi girls and women as sex slaves.”

Trying to explain what Shariah law says about sex with female slaves, the guide discusses women in a manner that others would discuss inanimate property. It explains rules such as its approval of having sex with a slave immediately after capturing them only if they are a virgin, otherwise one would have to wait till they are purified. Further, “It is permissible to have intercourse with the female slave who hasn’t reached puberty if she is fit for intercourse; however if she is not fit for intercourse, then it is enough to enjoy her without intercourse.”

The rules do point out that one cannot torture a sex slave, but punishment is allowable.

Below is each of the 27 disgusting rules and under that a video of ISIS men waiting for an auction of sex slaves. This, my friends is the real war on women:

“Question 1: What is al-sabi? Al-Sabi is a woman from among ahl al-harb [the people of war] who has been captured by Muslims.

“Question 3: Can all unbelieving women be taken captive? There is no dispute among the scholars that it is permissible to capture unbelieving women [who are characterized by] original unbelief [kufr asli], such as thekitabiyat [women from among the People of the Book, i.e. Jews and Christians] and polytheists. However, [the scholars] are disputed over [the issue of] capturing apostate women. The consensus leans towards forbidding it, though some people of knowledge think it permissible. We [ISIS] lean towards accepting the consensus…”

“Question 8: If two or more [men] buy a female captive together, does she then become [sexually] permissible to each of them? It is forbidden to have intercourse with a female captive if [the master] does not own her exclusively. One who owns [a captive] in partnership [with others] may not have sexual intercourse with her until the other [owners] sell or give him [their share].”

“Question 9: If the female captive was impregnated by her owner, can he then sell her? He can’t sell her if she becomes the mother of a child…”

“Question 10: If a man dies, what is the law regarding the female captive he owned? Female captives are distributed as part of his estate, just as all [other parts] of his estate [are distributed]. However, they may only provide services, not intercourse, if a father or [one of the] sons has already had intercourse with them, or if several [people] inherit them in partnership.”

“Question 15: May a female slave meet foreign men without wearing a hijab?
A female slave is allowed to expose her head, neck, hands, and feet in front of foreign men if fitna [enticement] can be avoided. However, if fitna is present, or of there is fear that it will occur, then it [i.e. exposing these body parts becomes] forbidden.”

“Question 17: What is al-‘azl? Al-‘azl is refraining from ejaculating on a woman’s pudendum [i.e. coitus interruptus].”

“Question 19: Is it permissible to beat a female slave? It is permissible to beat the female slave as a [form of] darb ta’deeb [disciplinary beating], [but] it is forbidden to [use] darb al-takseer [literally, breaking beating], [darb] al-tashaffi [beating for the purpose of achieving gratification], or [darb] al-ta’dheeb [torture beating]. Further, it is forbidden to hit the face.”

Question 20: What is the ruling regarding a female slave who runs away from her master? A male or female slave’s running away [from their master] is among the gravest of sins…”

“Question 22: Is it permissible to marry a Muslim [slave] or a kitabiyya [i.e. Jewish or Christian] female slave? It is impermissible for a free [man] to marry Muslim or kitabiyat female slaves, except for those [men] who feared to [commit] a sin, that is, the sin of fornication…”

“Question 25: Are the huddoud [Koranic punishments] applied to female slaves? If a female slave committed what necessitated the enforcement of a hadd [on her], a hadd [is then] enforced on her – however, the hadd is reduced by half within the hudud that accepts reduction by half…”

“Question 27: What is the reward for freeing a slave girl? Allah the exalted said [in the Koran]: ‘And what can make you know what is [breaking through] the difficult pass [hell]? It is the freeing of a slave.’ And [the prophet Muhammad] said: ‘Whoever frees a believer Allah frees every organ of his body from hellfire.'”