ISIS Isn’t Dead Yet, And Trump’s Syria Policy Is Very Much Alive 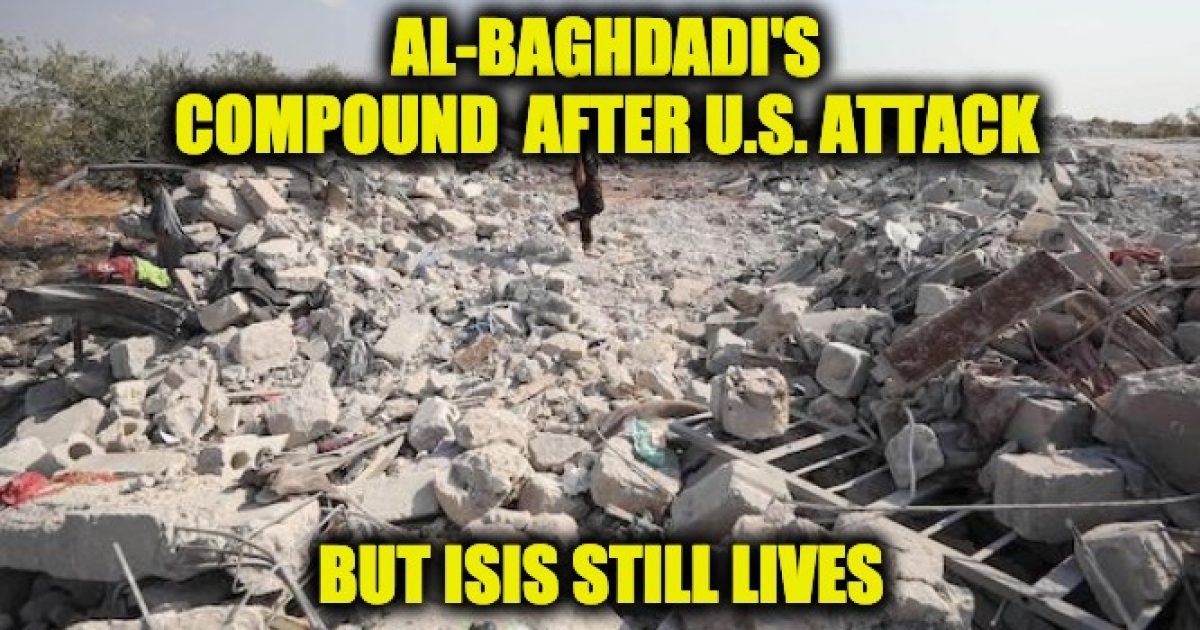 Al-Baghdadi’s death is a big win for America and the civilized world and a blow to the once-potent terrorist state that had already booted from most of the territory in Iraq and Syria that it once controlled. Sadly though, while the territory controlled by the”Islamic State of Iraq and Syria” may be gone, ISIS remains a live ideology that had begun to morph from a “state” to a terrorist network before al-Baghdadi died on Saturday. ISIS Isn’t dead

ISIS was planning to transition via a merger with other terrorist groups.  Syria expert Paul Salem of the Middle East Institute explained to National Public Radio that was the reason al-Baghdadi was in Idlib Province, which is known to be an al-Qaeda dominated area and is close to the Syrian border with Turkey,

“There are other sort of former al-Qaida splinter groups who are very hostile to ISIS and others who may have been looking to explore a – you know, a cooperation or merger. So that indicates that ISIS, as we know, was certainly on its back foot, had lost a lot of territory, had lost the caliphate, and was already turning more into a terrorist network like al-Qaida than anything like an actual state.”

Even without a terrorist group merger, ISIS has already founded and supported new franchises in Afghanistan, Libya, the Philippines, the Sinai Peninsula, Nigeria, and elsewhere. As the N.Y. Times pointed out,

As the American-led effort began to shrink the ISIS caliphate, Abu Bakr al-Baghdadi began to worry about his safety more than leading his terrorist army. He delegated much of his day-to-day authority and rarely spoke to anyone beyond family and his closest advisers. While he was still seen as the leader of the movement, al-Baghdadi was seldom involved in more than the most major decisions.

ISIS recruited its foot soldiers through the internet. That recruitment effort does not need significant funding or many people to execute the plan. Neither the death of the terrorist leader or the loss of the caliphate will stop the recruitment efforts. The reason President Trump emphasized the cowardly way al-Baghdadi died was to make ISIS less attractive to potential recruits. But recruitment via the internet will continue and probably successful.

In other words, both al Baghdadi and the caliphate are dead, but the deaths are more important symbolically than operationally. ISIS lives on and remains a threat to the Middle East and the world.

There is at least one more, perhaps unintended, consequence from the raid that resulted in the death of murderer al-Baghdadi.

Almost three weeks ago, President Trump announced he was keeping a campaign promise and was removing the U.S. military from Syria. The reaction was quick and bi-partisan; the President’s decision was hated by all.

The critics claimed that Trump abandoned our Kurdish allies to Turkey, and they would never work with the United States again.  Turkey would soon take over the entire Kurdish territory and the President’s plan to handle military issues in Syria from our troop locations in Iraq would not work.

The raid on Saturday seemed to put a dent in the naysayer’s predictions.   Al-Baghdadi was located using intelligence from many sources. One of the sources was the Kurds who would never work with America again. The raid on Abu Bakr al-Baghdadi’s compound was launched from Iraq and flew for over an hour to the terrorist’s location. On their way, the helicopters flew over an area where Turkish forces were located after they stopped their attacks on the Kurds because  VP Pence and Secretary of State Pompeo negotiated a cease-fire.

The day after the al-Baghdadi action, Mazloum Abdi leader of the Kurdish forces in Syria announced that the terrorist leader’s right-hand man and spokesman for the Islamic State Abu Hassan al-Muhajir was killed in a joint operation with U.S. troops in northern Syria. In other words, the Kurds are still working with our soldiers.

The raid on the al-Baghdadi compound was an action that should make all American’s proud of the people up the line who approved the mission but especially of the special forces who carried it out successfully. But it is important to note while Americans are safer because of the death of the ISIS leader, the organization is still alive. And no matter where our forces are based, America must continue attacking the ISIS and their remaining leadership to assure that it doesn’t realize its potential and regenerate into a more dangerous threat than it is today.