Did Alonzo Mourning Give President Obama Ideas About How To Eradicate Isis? 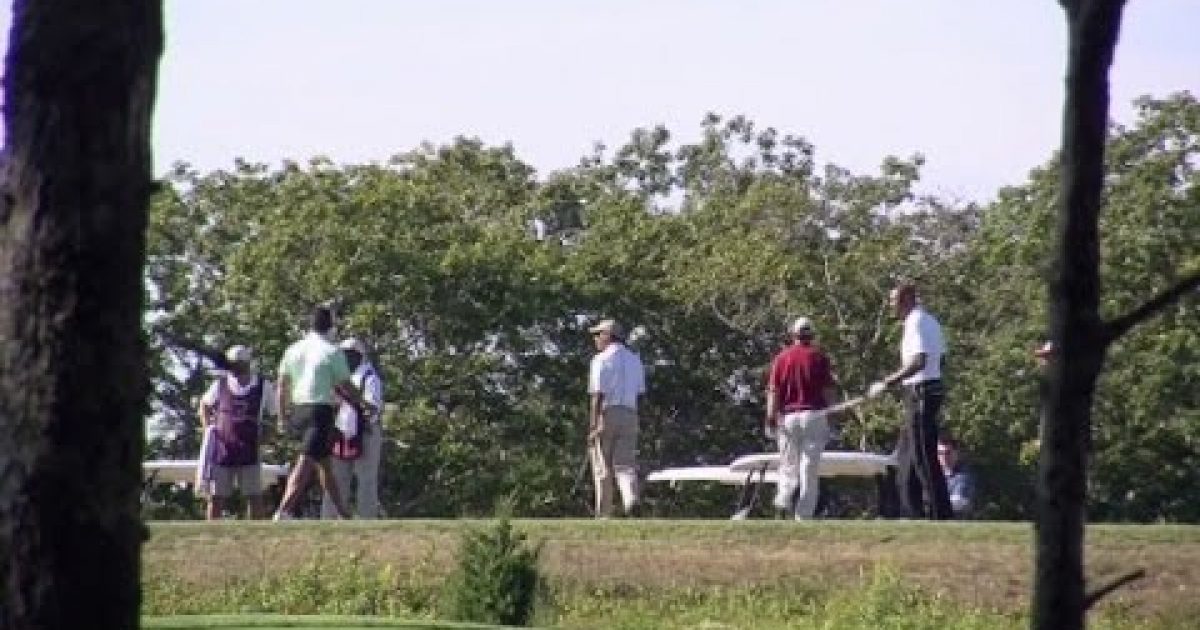 Dammit! For a moment there I thought he was trying to be Presidential. The short message by  a visibly angry President Obama wasn’t perfect, but it was pretty good for him. It was a flash of almost leadership.  Then he threw away the leadership optics by rushing to the Vineyard Golf Club for 18 holes of golf.

He denounced the murder of American journalist James Foley by ISIL terrorists as a violent act that “shocks the conscience of the entire world,” and declared that “no just God would stand for” the group’s actions “yesterday and every day.”

The President said that James Foley’s “life stands in stark contrast” to ISIL (also known as ISIS), which continues to perpetrate “cowardly acts of violence”:

They abduct women and children and subject them to torture and rape and slavery. They have murdered Muslims, both Sunni and Shi’a, by the thousands. They target Christians and religious minorities, driving them from their homes, murdering them when they can, for no other reason than they practice a different religion.

No just God would stand for what they did yesterday and what they do every single day. ISIL has no ideology of any value to human beings. Their ideology is bankrupt. They may claim out of expediency that they are at war with the United States or the West, but the fact is they terrorize their neighbors and offer them nothing but an endless slavery to their empty vision and the collapse of any definition of civilized behavior.

After that speech it took him just a few minutes to get into his golf clothes and head to Vineyard Golf Club with Alonzo Mourning, Glenn Hutchins and Cy Walker and tee-off.

Couldn’t he take one day off? I don’t begrudge this or any president from playing taking time off, but after giving a speech seemingly projecting a crisis attitude, he should act like it.

In his speech he talked about the need for

… a common effort to extract this cancer, so that it does not spread. There has to be a clear rejection of these kind of nihilistic ideologies. One thing we can all agree on is that a group like ISIL has no place in the 21st century.

How about at least taking a moment to at look like you are trying to come up with a way to extract that ‘cancer ‘ Mr President? Or are you trying to tell us Alonzo Mourning is giving you ideas as to how to handle Isis? Perhaps he is channeling OJ Simpson and looking for the real terrorists.  Optics are important not only to lead the country but also to show the terrorists the seriousness of ones threats.  Today, as usual the President failed optics.

Compounding the problem later in the day the pentagon released the information that there was an attempt to rescue the Isis hostages including James Foley earlier this year. But the mission was scrubbed when the rescuers discovered the hostages were not where they thought.  In other words our intelligence failed. When you combine that with the fact our intelligence told Obama that ISIS was a JV operation its an indication that the CIA needs help and FAST. Heck Alonzo Mourning could be ISIS and nobody would notice. Perhaps instead of crapping all over Israel, Obama should be asking the Mossad for advice.

Today the president showed he has the potential of being a leader, but he is just too lazy to really care.