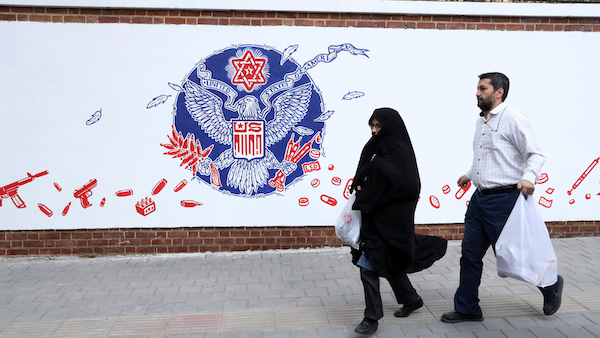 Isn’t there something incongruous about a human rights organization providing a platform to a journalist who has whitewashed human rights abuses? Iran’s forgotten Jews

Next week, an online event organized by the human rights group “3 Generations” will feature New York Times op-ed columnist Roger Cohen, who sparked an international furor in 2009 when he visited Iran and announced that the oppressed Jews there were not really so oppressed, after all.

Cohen’s assertion that Iranian Jews were “living, working and worshiping in relative tranquility” was met with scorn across the political spectrum. Jeffrey Goldberg, in The Atlantic, called him “credulous.”  The Anti-Defamation League charged Cohen with viewing Iran through “dangerous rose-colored lenses.” J.J. Goldberg, in The Forward, characterized Cohen as “simply naive, and dangerously so.”

In subsequent writings and remarks, Cohen not only doubled down on his denial of Iran’s antisemitic persecution but also heaped praise on the ruling authorities for treating him “with such consistent warmth.” That prompted caustic comments recalling notorious instances in history in which other dictators wined and dined gullible foreign journalists.

That year’s annual State Department report on international religious freedom presented a very different picture from the one Cohen had painted. Iran’s 25,000 Jews were the victims of “officially sanctioned discrimination, particularly in the areas of employment, education, and housing,” according to the 2009 report. The ruling regime “limited the distribution of Hebrew texts, particularly nonreligious texts, making it difficult to teach the language.” Also, “There was a rise in officially sanctioned anti-Semitic propaganda involving official statements, media outlets, publications, and books.”

Cohen tried—not very persuasively—to politicize the controversy. He claimed that allegations of Iranian Jewish suffering were conjured up by his political foes. “The hawks’ case against Iran depends on a vision of an apocalyptic regime” that is “frenziedly anti-Semitic,” Cohen asserted. Yet it was Barack Obama’s State Department that was portraying Iran as frenziedly antisemitic. It seemed Cohen was using Iran’s Jews to advance his own agenda—to soften Iran’s international image to encourage Western rapprochement with the ayatollahs.

The troubling phenomenon of political interests trumping human rights is something with which the “3 Generations” leaders are all too familiar.

The group’s founder, Jane Wells, is the daughter of Sidney Bernstein, who was assigned by the British Ministry of Information in the spring of 1945 to make a film documenting the atrocities in Nazi death camps—until politics interfered.

Bernstein hired Alfred Hitchcock as his supervising director. They and their crew went into the liberated camps that spring and summer, filming the piles of unburied corpses, the emaciated survivors, and all the other horrific evidence of the Holocaust. Some of the footage was used in the postwar trials of Nazi war criminals.

But just before the film was completed, the British authorities shelved it. His Majesty’s Government had decided upon a policy of “encouraging” and “stimulating” friendly relations with postwar Germany, Bernstein, and Hitchcock were abruptly informed in September 1945. An “atrocity film” might make for bad feelings. According to some reports, the British were also concerned that the film might increase sympathy for creating a Jewish state in Palestine, something London was resisting.

It all came full circle sixty years later, when Ms. Wells, Bernstein’s daughter, met photojournalist Brian Steidle, who had just returned from Darfur. Steidle described how State Department officials had pressed him to stop circulating his photos of the genocide there; they feared Steidle was undermining U.S.-Sudanese relations. Moved by what she saw as the “overt parallels” between Steidle’s experience and her father’s, Wells produced an award-winning documentary about the Darfur slaughter and established the “3 Generations” group to create and promote other human rights films.

The “3 Generations” website describes a number of worthy projects that the group has in the works, although there is no mention of any plan to document the plight of Iran’s Jews. That’s a pity because, according to the most recent State Department report on the subject, the persecution of Iranian Jewry continues unabated.

The 9,000-15,000 Jews remaining in Iran “face societal discrimination and harassment,” the report says. They cannot serve in the judiciary, the security services, or various other professions. They “may not engage in public religious expression.” Jewish schools must have Muslim principals, must remain open on the Jewish Sabbath, and must have their curricula and textbooks approved by the authorities. Iranian government officials “employ anti-Semitic rhetoric in official statements and to sanction it in media outlets, publications, and books,” “government-sponsored rallies continued to include chants of ‘Death to Israel,’” and “local newspapers carried editorial cartoons that were anti-Semitic.”

All of which makes the upcoming appearance by Roger Cohen at the “3 Generations” event more than a little ironic: An unrepentant denier of anti-Jewish persecution will be featured by an organization whose creation was inspired by the suppression of a film about anti-Jewish persecution. One wonders what Sidney Bernstein would have thought about this turn of events.

(Dr. Medoff is director of The David S. Wyman Institute for Holocaust Studies in Washington DC, and author of more than 20 books about the Holocaust and Jewish history).