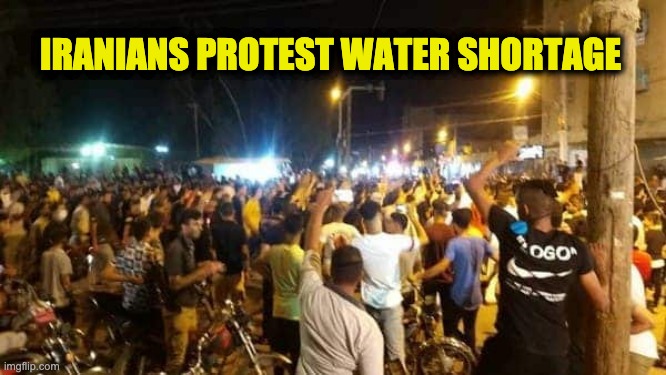 Biden has no trouble denouncing America to the whole world. Let’s see if he can speak up when Iran’s racial minorities start dying in water shortage protests. For the last few days, our attention has been fixed on anti-regime protests in Cuba. But that’s not the only authoritarian regime that the Obama/Biden administration cozied up to that is having trouble with public protests.

The one Arab country whose ‘Arab Spring’ protests Obama did not welcome during his presidency has had some mass protests in the streets. That’s right… Iran.

We’re now on day 5 of the protests.

Online activists who are connected to Ahwaz human rights groups have reported protests in southwest Iran in the Ahwaz region. Reports at Akhbar Alaan and other outlets have also said there are demonstrations. Videos posted online showed protests, primarily at night, and it was difficult to confirm what else was occurring.

The reports say that Ahwaz residents of the region, which is mostly made up of Arab minorities within Iran, had been angry over lack of clean water. This was attributed to Tehran’s building of new dams.

There is also an ongoing anger over discrimination and a feeling that the region is marginalized. The region has had many protests over the years against the regime, which has targeted Ahwaz activists abroad. Activists in Europe and the UK, had vowed to hold a protest over the weekend in response.

VOA cannot independently confirm the authenticity of the videos as it is barred from reporting inside Iran.

In the clips, protesters can be heard shouting slogans such as “I am thirsty” and “water is my right.” One video shared Thursday appeared to show marchers on a street pushing back against riot police who tried to stop them. In another video also shared on Thursday, a narrator identifies the location as the city of Khorramshahr as apparent gunfire can be heard coming from a nearby location.

This isn’t just the natural result of a severe drought, claim critics of the regime. The drought is being leveraged against these people. Their thirst, say the activists, is intentional.

“These are words uttered by the people in the streets,” Azizi Bani-Torof said.

“The regime media should send its reporters to see that the Dez and Karkheh rivers have partially dried out,” he added, referring to two major water sources in Khuzestan province.

What would you expect to happen next in the regime that shot down a passenger aircraft full of foreign nationals but tried to blame America for it?

Iranian police opened fire late Sunday night amid protests against water shortages in southwestern Iran, a video showed, the latest unrest after days of demonstrations that have seen at least one person killed.

A police officer fires into the air with a pistol and at least one other shot can be heard in the footage. Riot police on motorcycles race around a corner, firing at the protesters.

…On Sunday, the deputy governor of Khuzestan province in charge of security affairs acknowledged the unrest had killed at least one person. The state-run IRNA news agency quoted Valiollah Hayati as blaming “rioters” for killing a citizen in the city of Shadegan in Khuzestan. Iran’s government long has blamed protesters for deaths during demonstrators in unrest, despite its history of bloody crackdowns.

Many outlets report at least one fatality among the protesters. Al Jazeera has reported at least two.

Iran’s leadership, not surprisingly, took no personal responsibility for the protests, the shortages, or for the crackdowns. Instead, they turned public attention against their favorite scapegoats.

Iran’s Supreme Leader Ayatollah Ali Khamenei used his address marking the start of the holy Hajj season to condemn U.S. policy in the Middle East, even as major protests erupt in the south of the country following severe drought and power outages.

Khamenei posted a series of tweets on his English-language account early on Monday, dismissing the U.S. as aggressive and “arrogant” and urging Muslim nations in the region to resist Washington, D.C. and its allies in Israel.

… “We, the followers of Islam—who enjoy large populations, vast lands, and countless natural resources—must build the future with our assets & resources, and stand up and RESIST the aggression, interference and evil of western powers,” Khamenei added.

Oh, isn’t that nice? Khamenei has even adopted the Democrats’ terminology of ‘resist.’

Biden has a decision to make. He can continue kissing Iran’s ass. Or he can stand up for the minority protesters who are suffering from this drought and the police-state crackdown.

He cannot do both.