Is Iran Finally Going To Get A Pair Of Navy Ships To Venezuela? 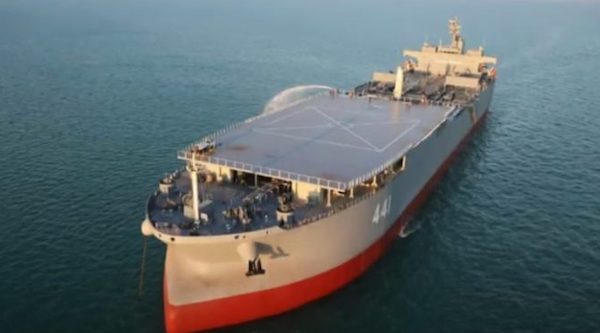 The Iranian regime has been vowing to do this since 2011 but has yet to bring it off.  Now Politico reports that U.S. officials are tracking an Iranian frigate in company with the newly commissioned “mobile base” ship Makran (pennant 441) on the East coast of Africa, apparently moving south and possibly headed for a visit to Venezuela. Iran Navy Ships Venezuela

The frigate, unnamed in the Politico report, may be IRIS Sabalan (pennant 73), which Iran heralded as on its way to Venezuela in 2014.  (Prematurely, as it turned out.)  Sabalan is the frigate that survived the U.S. counterattack in 1988 (Operation Praying Mantis) during the Iran-Iraq War after an Iranian mine severely damaged a U.S. frigate, USS Samuel B Roberts (FFG-58).  Iran may try again to make the point that Sabalan is still in service and operating close to the United States.

Otherwise, more recently commissioned candidates include the Iranian Mowj-class frigates Jamaran and Sahand.  (The latter is the namesake of Sabalan’s sister ship that didn’t survive Praying Mantis in 1988.)  Alert readers may be aware that the Makran debuted in a fleet exercise in January with a new Sina-class guided-missile missile patrol ship, the Zereh, which some sources have called a frigate.  However, the Sina class is not called a frigate by the U.S. Navy, and I doubt an official source citing Navy information would have used the designation in describing Zereh.  The Sinas, small and zippy, are improved La Combattante II class patrol ships, referred to by the U.S. Navy as “PTGs” (the G indicating guided-missile equipped).  They don’t have the legs for effective deployment of the distance involved in going to Venezuela.  An actual frigate is a more likely candidate.

The frigates have been getting a workout in regional deployments in the years since the international antipiracy mission off Somalia was undertaken by several nations in late 2008.

Makran, meanwhile, is a converted oil tanker with a multi-role purpose, typically cast as similar to that of the U.S. Navy’s expeditionary mobile base (ESB), the lead unit of which is USS Lewis B Puller (ESB-3). 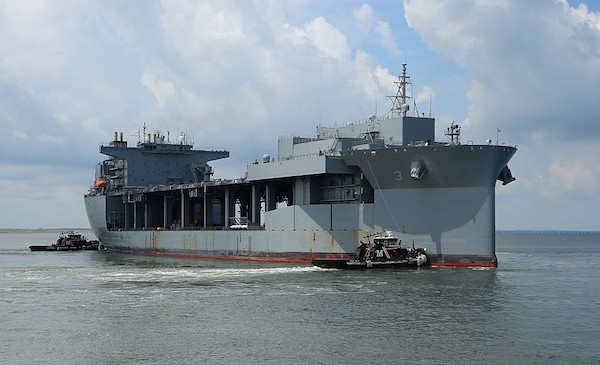 Makran has been fitted with a large helicopter deck (which can accommodate several helicopters; the ship can reportedly accommodate up to seven helos at one time) and provides other operational capabilities such as deploying special forces, acting as a base for fast boats, operating drones, treating wounded, and deploying/operating missile and radar systems.

What makes Makran special, however, is something more prosaic.  The popular media reports haven’t mentioned it, but what any Navy sailor immediately notices is the absence from the little Iranian task force of a fleet oiler.  That frigate is going a need a few drinks along the way if it’s going to Venezuela.

In the past, the Iranian antipiracy warships have deployed in company with the replenishment oiler Kharg (431), a UK-built, modified OI-class oiler delivered to Iran in 1984.  When Iran first dispatched a task force supposedly headed for Venezuela in 2014, Kharg was the oiler accompanying the frigate Sabalan. (It became obvious during that deployment that the ships didn’t go to Venezuela, although for a while, Iran kept up a pretense that that trans-Atlantic voyage was in view.)

In 2021, however, if the U.S. believes that only a frigate and Makran are in transit, it appears that Makran is the replenishment ship for the mission – and that could include gassing the frigate up.  (I haven’t found substantial information on how proficient Iran has become with replenishment performed at sea; the discussion here proceeds as if the Iranian navy does have the capability today.)

According to the Iranian press announcements, when Makran entered the fleet, supplying fuel to other ships is one of the former tanker’s capabilities:  “Makran forward base ship can carry 100,000 tons of fuel and fresh water and supply them to the naval vessels in various locations.”

The fixture enabling Makran to fuel another ship appears to be the crane system mounted on the deck aft of the helo platform.  An Iranian image has it highlighted. 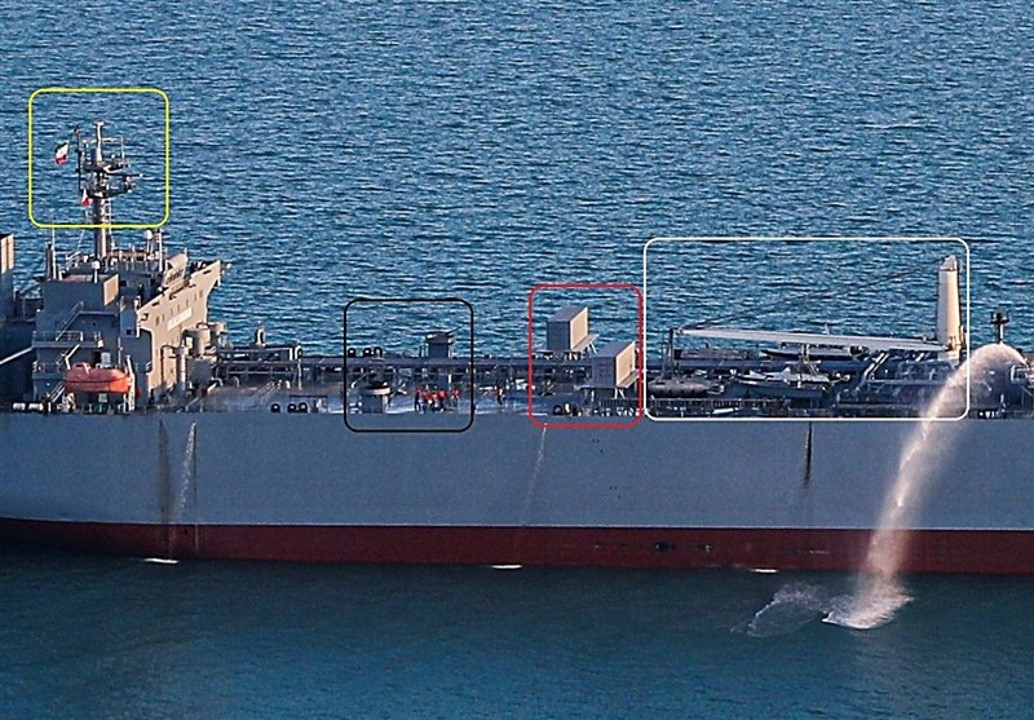 The crane could swing between starboard and port, apparently supporting one fueling station.  Kharg, a purpose-built replenishment ship with upright fueling station mounts, is potentially capable of a more typical number of fueling stations, e.g., two or four in active configuration.  The Iranian naval deployment profile is not such that many fueling stations are likely to be necessary anytime soon, however.  With one frigate to fuel, Makran’s single crane would be sufficient. 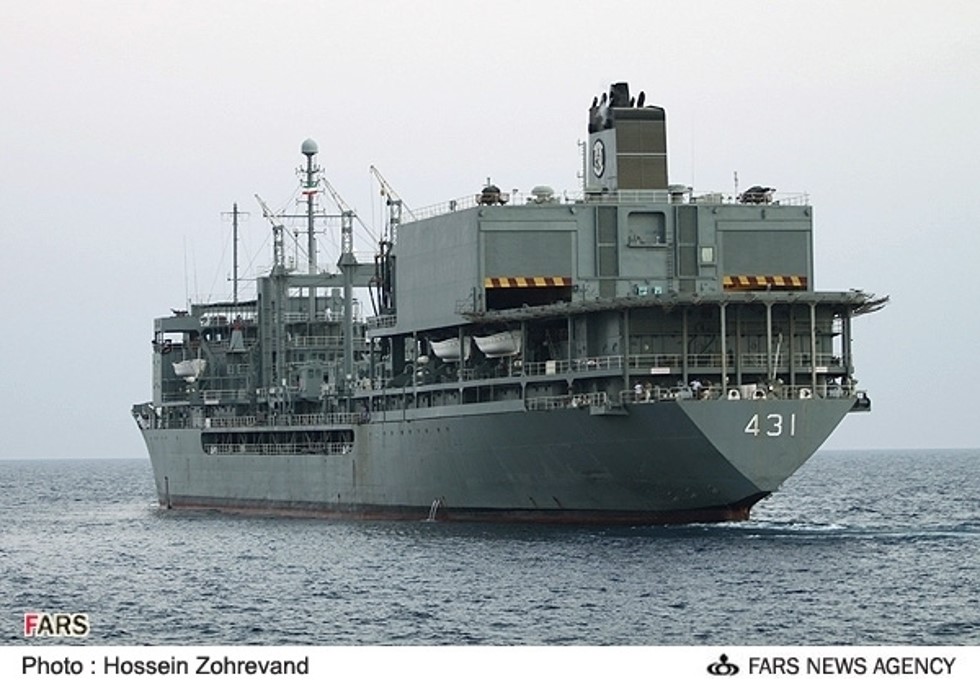 I’m not sure how jazzed I would be about an underway replenishment with a fueling apparatus of that crane style, but going around Africa and jumping across the Atlantic in a single, unrefueled leg, using the shortest-distance route, would allow fueling to be done at low speed (or even at anchor) off the African coast. 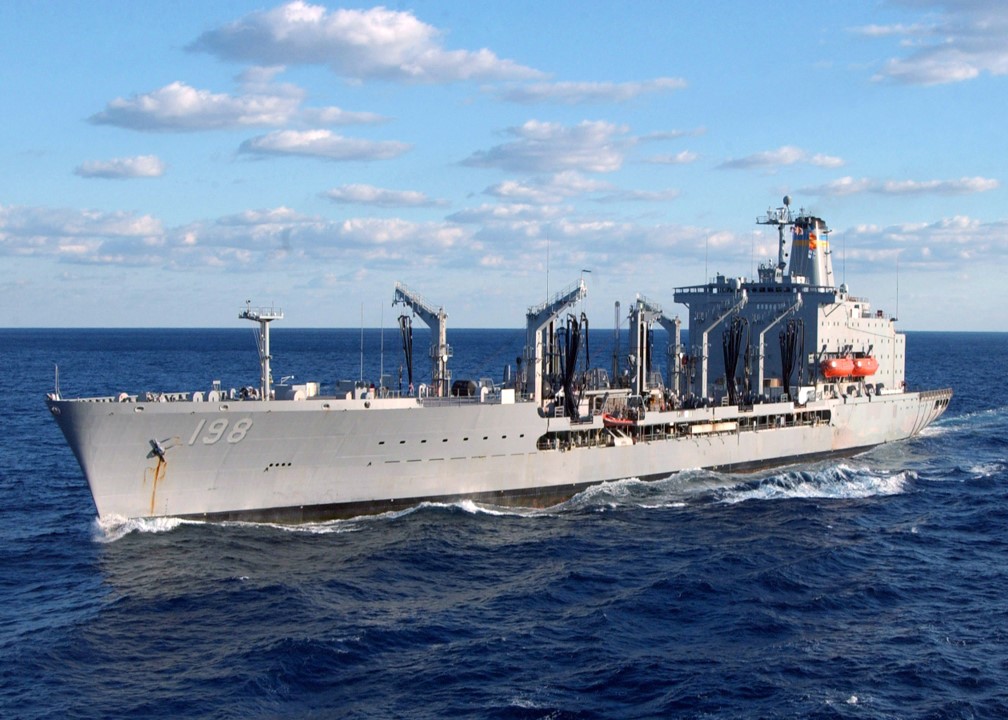 The journey’s one-way length, over 10,000 nautical miles going around Africa (or close to 12,000 statute miles), at a speed of advance averaging 15 knots, would take about 28 days. 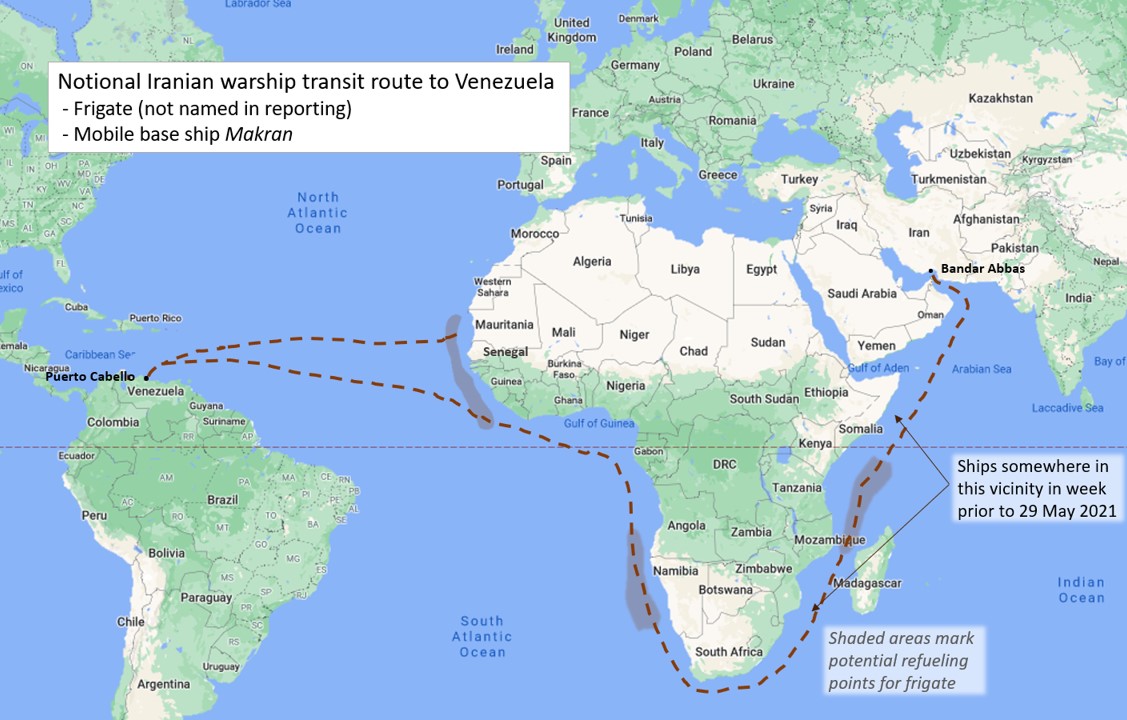 Likely refueling points are indicated along the African coast in the shaded areas.  The “jump off” west to Venezuela would be about the same from the shaded area running up from northern  Guinea to Mauritania, making for a final Atlantic-crossing leg of about 3000 NM.  (The preference for refueling would be to not let the frigate drop below about 35-40% fuel capacity.  She would likely do that crossing the Atlantic but would not have to fall much below it if she topped off at the “jump-off.”)

As mentioned in my 2014 reporting, Iran has cultivated close relations with both Senegal and Mauritania, and either would probably be a preferred place for her navy to make the jump-off refueling stop.  A port visit for that purpose might even be planned.

According to the reports so far, the U.S. sources say the two warships appeared to stop on Africa’s East coast and perhaps turn around in the last few days.  The sources then said the ships appeared to have resumed the transit south.  If that sequence reflected a refueling pause, perhaps in or near the shaded area off Tanzania and Mozambique, it would suggest the ships had been underway from Bandar Abbas for about a week at the stopping point.

That would put an arrival in Venezuela – probably at the Puerto Cabello main naval base – about three weeks from now, or in the neighborhood of 18-22 June.  I would figure to the later date to factor in pauses for refueling and other replenishment, rather than refueling at the uninterrupted transit speed.  The ships might also pull in for a grand arrival and dress display at the commercial port of Caracas (La Guaira) next to Simon Bolivar International Airport. 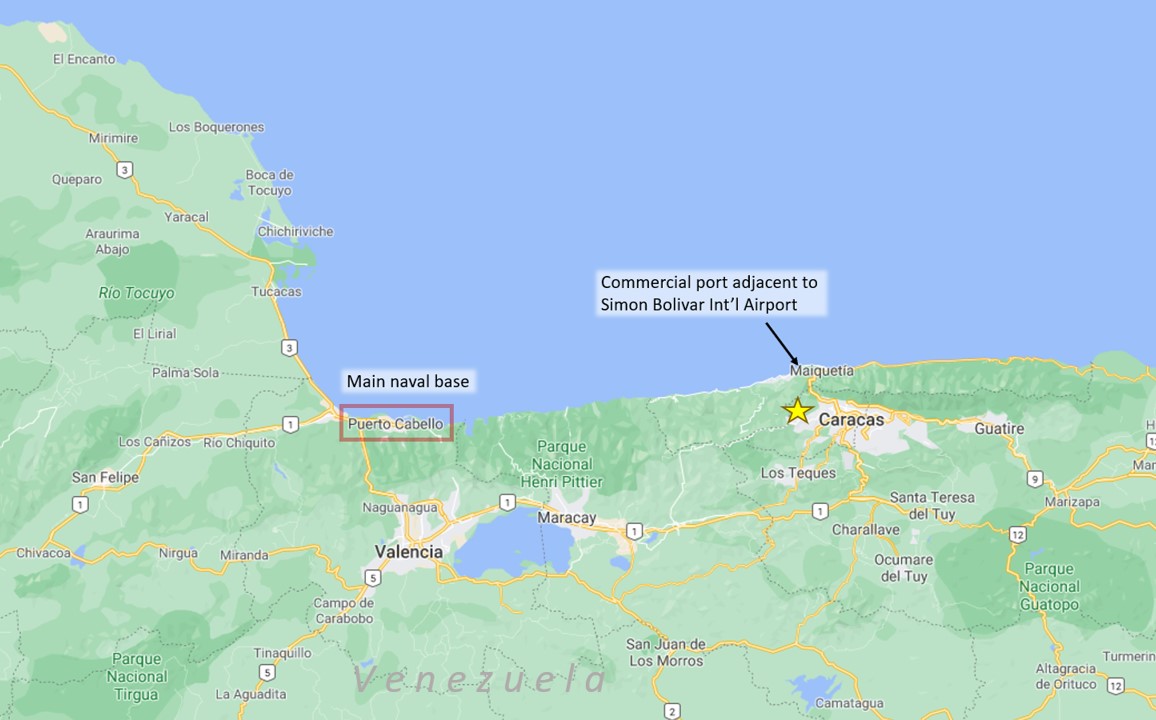 Will the Iranian ships make a foray north from Venezuela to photobomb the waters off the United States?  As they used to say on the old 1960s show Laugh In, you bet your bippie they will.  (At the least, it’s very probable.  Politico mentions that the Trump administration intervened to keep Iranian merchant ships from reaching Venezuela in 2020.  If the warships get as far as Venezuela, as they probably will if they bring the transit itself off, the regime will almost certainly make the point that this time it’s different.  The most dramatic and effective way to do that is to show up off, say, Jacksonville, King’s Bay, or Virginia Beach or New York.)

Zooming the U.S. East coast would have been fun with Sabalan in 2014, but it would be a laugh-riot with Makran in 2021.

In 2014, Sabalan would have been the main event.  In 2021, the frigate will be the escort for Makran, which is likely to pose for selfies with whatever parts of the U.S. coast are visible from points 13 NM offshore, and perhaps run a missile launcher out on deck for good measure.

A visitation off the U.S. coast would be likely to involve a stop in Cuba as well.  A visit to Nicaragua is not out of the question.

The U.S. Navy could swat this naval task force like a gnat.  But the mullahs know the Biden administration isn’t going to make that point.  We can assume the Navy will make excellent professional use of the intelligence collection opportunity.

There may, of course, be political shenanigans in the next few weeks that forestall — or could be depicted as forestalling — the Iranian voyage that seems to be planned.  That possibility is lower than in the past, but it’s always there.  So any follow-on developments are still pending Iran completing the trip to the Western hemisphere this time.