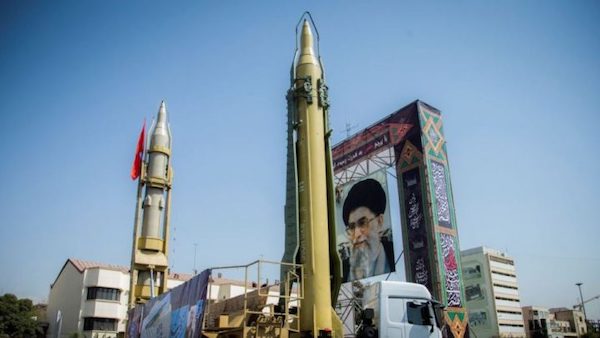 Iran has declared it will no longer abide by any of the restrictions imposed by the 2015 nuclear deal (JCPOA). But it doesn’t really matter. The JCPOA didn’t really restrict Iran, and Iran wasn’t observing essential parts of the agreement anyway. Iran ends JCPOA commitments

In a statement broadcast on state TV late on Sunday, the Iranian government said the country would no longer observe limitations on uranium enrichment, stockpiles of enriched uranium or nuclear research and development.

The statement said in part:

“The Islamic Republic of Iran will end its final limitations in the nuclear deal, meaning the limitation in the number of centrifuges. Therefore Iran’s nuclear program will have no limitations in production including enrichment capacity and percentage and number of enriched uranium and research and expansion.”

As 5th & final REMEDIAL step under paragraph 36 of JCPOA, there will no longer be any restriction on number of centrifuges

Full cooperation??? Humbug! Saying that Iran is cooperating with the IAEA is like saying Rod Blagojevich was an honest politician.

Per The Institute For Science And International Security that goes by the unfortunate acronym of ISIS (but it’s the good ISIS) the IAEA found many Iranian violations of the JCPOA in its most recent report:

This report details a large number of violations of the Joint Comprehensive Plan of Action (JCPOA) and possibly Iran’s Comprehensive Safeguards Agreement. The main violations, some of which are not fully reversible, are highlighted here; several are discussed in more detail below:

Because of a secret side deal revealed by the Associated Press long before the deal was agreed to, Iran gets to self-inspect the Parchin military base with no IAEA inspectors present. Parchin is the site where Iran was working on nuclear triggers for its bomb program. So there is no way to know if they are violating the JCPOA there

All other military base inspections are allowed under the JCPOA.   The  agreement specifically “requests the Director-General of the IAEA to undertake the necessary verification and monitoring of Iran’s nuclear-related commitments for the full duration of those commitments under the JCPOA.” Despite what the JCPOA states, the Iranian authorities claim military sites are off-limits to the IAEA. Sadly the IAEA and the countries that stayed in the deal refuse to push the point because they don’t want Iran to seem non-compliant.

One of the problems with this refusal involves “Section T” of the deal. In Aug. 2017, the IAEA’s announced that it has been unable to verify a vital part of the JCPOA, “Section T.”  It outlines “Activities which could contribute to the design and development of a nuclear explosive device.” That inability doesn’t mean Iran violated “Section T.” It means is your guess is as good as mine because nobody knows — but the deal says the IAEA is supposed to inspect.

Using information secretly gathered by a Mossad operation in Iran and verified by the United States, in April 2018, Israeli Prime Minister Binyamin Netanyahu exposed a significant lie in the information the Iranians supplied to the IAEA for its 2015 report. Iran not only had a nuclear weapons program (called Amad), but after it was supposedly canceled in 2013, the work continued.

Iran had been non-compliant with its obligation to reveal its nuclear history. According to the JCPOA, the rogue nation was supposed to disclose all the details of its nuclear program that existed before the deal. This was a condition for implementing the agreement.  The historical knowledge is necessary so the IAEA will know how, when, and where to inspect Iran’s program in the future.  When it came time to “fess up,” Iran told the IAEA that it never had a nuclear program. The IAEA reported what it was told instead of pushing back against a blatant lie.  This is another example of a breach of the accord that was published as compliance.  In other words, the entire agreement was based on a lie and should never have been implemented.

There are many other examples like new construction, the underground Fordo Nuclear Facility, or president Obama’s promise not to enforce snapbacks, or the side deal allowing Iran to upgrade centrifuges within the agreement. Still, the point is the JCPOA never really handcuffed the Iranian nuclear program. That’s why the President pulled out of the JCPOA two years ago. And that’s why Iran’s announcement doesn’t matter.