Right After He Took Them Off The Terrorist List 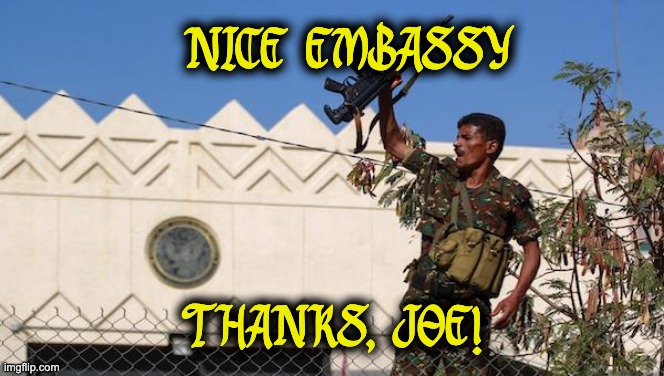 When we wondered how a President could ever deliver worse foreign AND domestic policy than Jimmy Carter, we never dreamt that someone would be dumb enough to take that as a challenge. Then again, we never dreamt the Democrats would nominate someone known during his Senate career as a blowhard who wasn’t too bright. Some of his senate colleagues described him as fifteen pounds of crap in a ten-pound bag.

Now, not even a year into his Presidency, Biden’s America faces its second hostage crisis.

You Know About ONE Crisis…

As for the first one, most of the media has already swept it under the rug. But we all still know that some Americans, the families of some Americans, and people with every right to enter America lawfully with a Green Card were trapped in a country being run by the same terrorist group with whom we’ve just concluded a 20-year war.

When heroic Americans have worked to exfiltrate them to neighboring countries, Biden’s State Department has worked at cross purposes from helping them land in other countries.

They demonstrated their open contempt for all types of border security, whether at our southern border or that  Afghan airlift they bragged about in August.

But Have You Heard About THIS One?

Iran-backed Houthi terrorists attacked a US Embassy, taking control and seizing hostages. A specific reversal of policy in Biden’s first month worked to the advantage of those rebels.

While we may not have any Americans working in that embassy at the moment, we DO have locals working on behalf of American interests. They have been attacked, our property seized, and our embassy was taken.

Houthi fighters reportedly took the compound on Wednesday, demanding “large quantities of equipment and materials,” per the Middle East Media Research Institute. Yemen has been embroiled in a brutal civil war between the Houthi rebels — who are backed, financed, and armed by the Iranian government —and the standing Yemeni government, which has the support of Saudi Arabia. The conflict is oftentimes described as a “proxy war” being fought by the two Yemeni sides on the ground, but largely on behalf of the two larger powers.

Within a month of taking office, President Joe Biden removed the foreign-terrorist organization designation placed on the Houthis by the Trump administration. The designation had cut the Houthis “off from financial support and other material resources that are routed through U.S. banks or other American institutions.” Secretary of State Antony Blinken called the decision “a recognition of the dire humanitarian situation in Yemen.”

The Trump administration’s designation had included a carve-out authorizing the Treasury Department “to provide licenses pursuant to its authorities and corresponding guidance that relate to the official activities of the United States government in Yemen, including assistance programming that continues to be the largest of any donor and the official activities of certain international organizations such as the United Nations.” At the same time as the removal of the foreign terrorist label, Biden also announced the cessation of “all American support for offensive operations in the war in Yemen, including relevant arms sales.” Previously, the U.S. had been backed the Yemeni government,

Yes, you read that correctly. Thanks to Joe Biden’s personal decision, we have been giving terrorists money. Just like he gave an allowance to the Taliban, they have ‘thanked’ him by seizing our embassy.  The Houthis are closely aligned to the Iranian muftis.  Taking them off the terrorist list was a way for Biden to “make nice” to his new Iranian friends—help him capitulate into a new nuclear deal.

Do you remember that old joke, usually at the expense of British policemen? ‘Stop, or I shall say stop again!’ The response of the Biden administration is uncomfortably close to that.

Consular services at the Sanaa embassy have been suspended since February of 2015 after Houthi rebels took control of the capital city during Yemen’s ongoing civil war. The U.S. diplomatic staff returned home and, in 2018, Reuters reported the U.S. ambassador for Yemen had been working out of the Saudi Arabian city of Jeddah.

While U.S. personnel have been gone for years, local employees have continued to work for the embassy either from home or as security guards at the embassy compound.

“We call on the Houthis to immediately vacate it and return all seized property,” Price said Thursday. “The U.S. government will continue its diplomatic efforts to secure the release of our staff and the vacating of our compound, including through our international partners.”

Reports indicate that ‘most of those hostages have been released. But ‘most’ is not ‘all’.

And the staff there — like the allies who helped us in Afghanistan — are OUR responsibility. Based on his Afghanistan screw-up Biden doesn’t care about American responsibility. He only cares about forcing people to take vaccines and forcing the treasury to spend money it doesn’t have.

“We need to go on offense and look. It’s not just these non-state terror groups,” Willink said, referencing the Houthis, an Iran-backed rebel group.

“We got China’s military practicing bombing American warships with full-sized targets in the desert. We got the Russians conducting offensive training operations in Belarus. So you’ve got Russia, you’ve got China, you’ve got the Houthis. This type of behavior will grow because there’s no deterrence, no fear and as you said, no respect for America,” he said.

“And we need to bring that back by going on the offense and proving that we are the strong great America that we always have been.”

And he reminds us why we should not shrink back from calling these terrorists by that appropriate designation. They’re a “fundamentalist group that uses child soldiers,” he continued. “They shell civilian areas. They put landmines in civilian cities. They execute people. They use human shields. This is absolutely a terrorist group that propagates the slogan ‘Death to America! Death to Israel!’ and there’s no fear, there’s no deterrence.”

Beijing Biden believes the only real terrorists are Americans who disagree with his woke positions.  Joe and his liberal buddies call them white supremacists, even if they aren’t white. That’s what they called Larry Elder. They called Kyle Rittenhouse a white supremacist even though everyone he shot in self-defense was Caucasian.

Will Joe Discover His Spine? (Does He Have A Spine?)

Biden loved to shake his fist and brag about how tough he was, threatening to take people behind the gym and challenging people to push-up contests, as though that’s the kind of toughness that matters behind the (ir)Resolute Desk.

The only group he has been steadfastly and resolutely opposed to is anyone who stands in the way of him ‘fundamentally transforming’ America by giving the left everything they want. Even if accomplishing that means demonizing (or even criminalizing!) half of the country and setting fire to the Constitution.

You can’t make an omelet without cracking some eggs and can’t turn the freest country in the world into a socialist dictatorship without burning the Constitution.