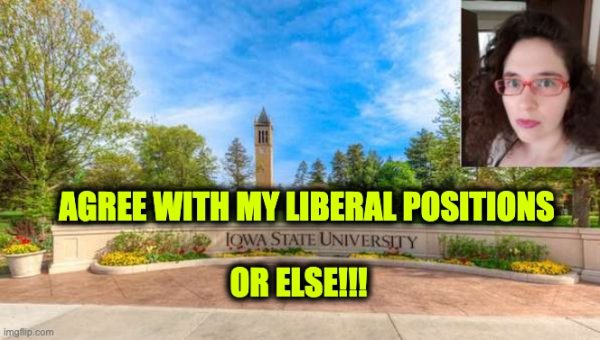 Diversity of thought used to be encouraged in college but not in this English class. Professor Chloe Clark used her syllabus to warn students that if they don’t support liberal positions on issues such as BLM, gay-marriage, or abortion, she will toss them out of her class. When University management found out…they weren’t happy.  Iowa State English professor

A professor of English at Iowa State University issued a syllabus for her class asserting that any student who opposes the pro-choice perspective or the Black Lives Matter movement will have created “grounds for dismissal from the classroom.”

Chloe Clark gave a warning on the syllabus for her English 250 class [below], which was obtained by Young America’s Foundation from an anonymous source who wished to avoid retribution for giving it to YAF through YAF’s Campus Bias Tip Line.

Below is the class syllabus courtesy of YAF. The section I’ve placed within the rectangle reads:

GIANT WARNING: Any instances of othering that you participate in intentionally (racism, sexism, ableism, homophobia, sorophobia, transphobia, classism, mocking of mental health issues, body shaming, etc) in class are grounds for dismissal from the classroom,” the professor wrote. 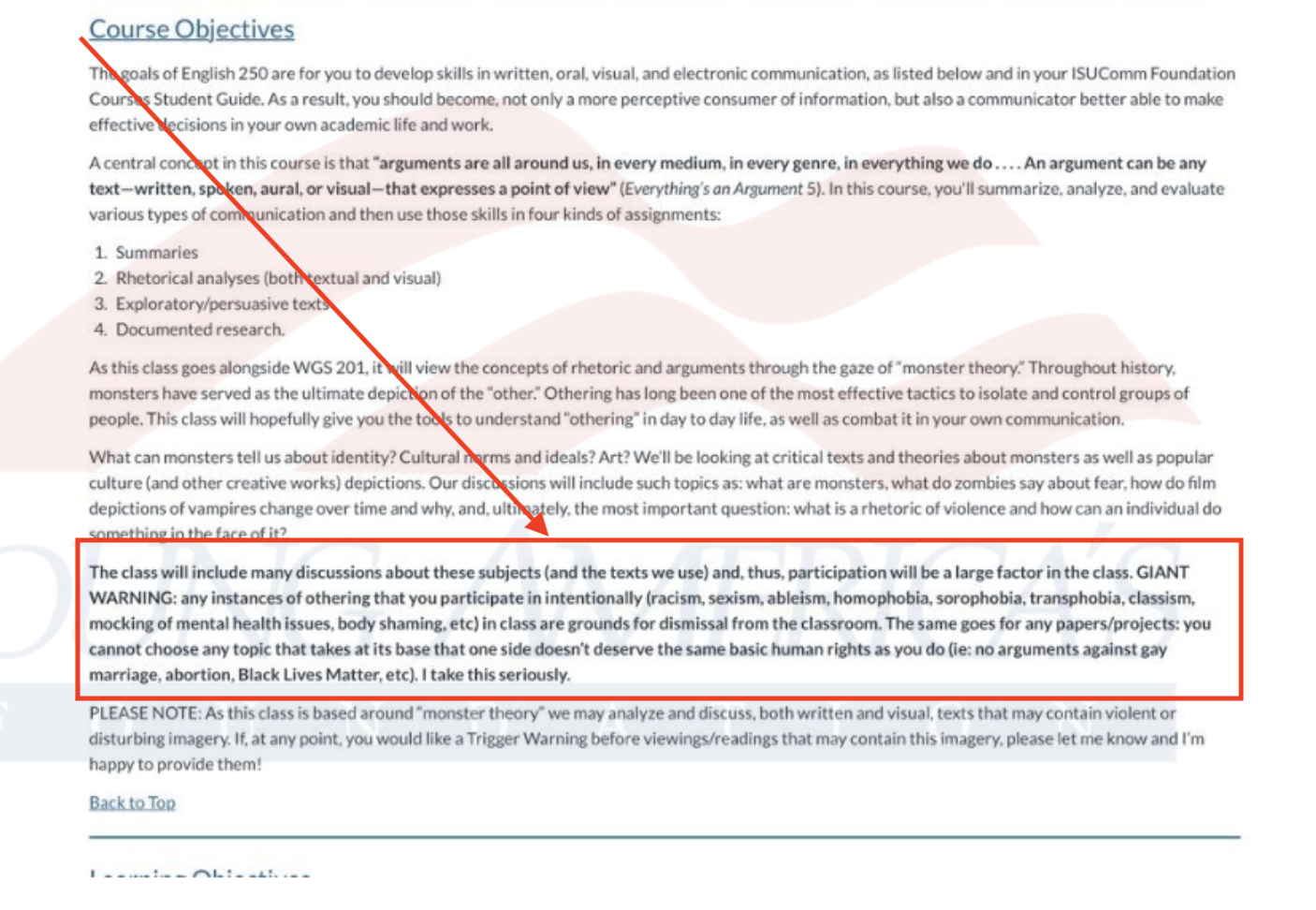 Professor Clark also told her students that in their papers and projects “you cannot choose any topic that takes at its base that one side doesn’t deserve the same basic human rights as you do (ie: no arguments against gay marriage, abortion, Black Lives Matter, etc.). I take this seriously.”

Which black lives matter? Certainly, not “all” – as the left loves to scream at the top of their lungs. By “all,” they clearly mean some. Otherwise, they’d take a stand for the unborn. But they can’t because Professor Clark would toss them out of the class…well maybe not.

YAF contacted Iowa State University about the Issue. The university didn’t seem pleased with the syllabus and sent YAF this statement  stating  the problem has been fixed, and Professor Clark is getting some remedial First Amendment training:

“The syllabus statement as written was inconsistent with the university’s standards and its commitment to the First Amendment rights of students.  After reviewing this issue with the faculty member, the syllabus has been corrected to ensure it is consistent with university policy.  Moreover, the faculty member is being provided additional information regarding the First Amendment policies of the university.

Iowa State is firmly committed to protecting the First Amendment rights of its students, faculty, and staff. With respect to student expression in the classroom, including the completion of assignments, the university does not take disciplinary action against students based on the content or viewpoints expressed in their speech.”

Ouch! I wonder if Professor Clark has tenure. If she doesn’t as of yet,  that may now be a challenging goal to attain.