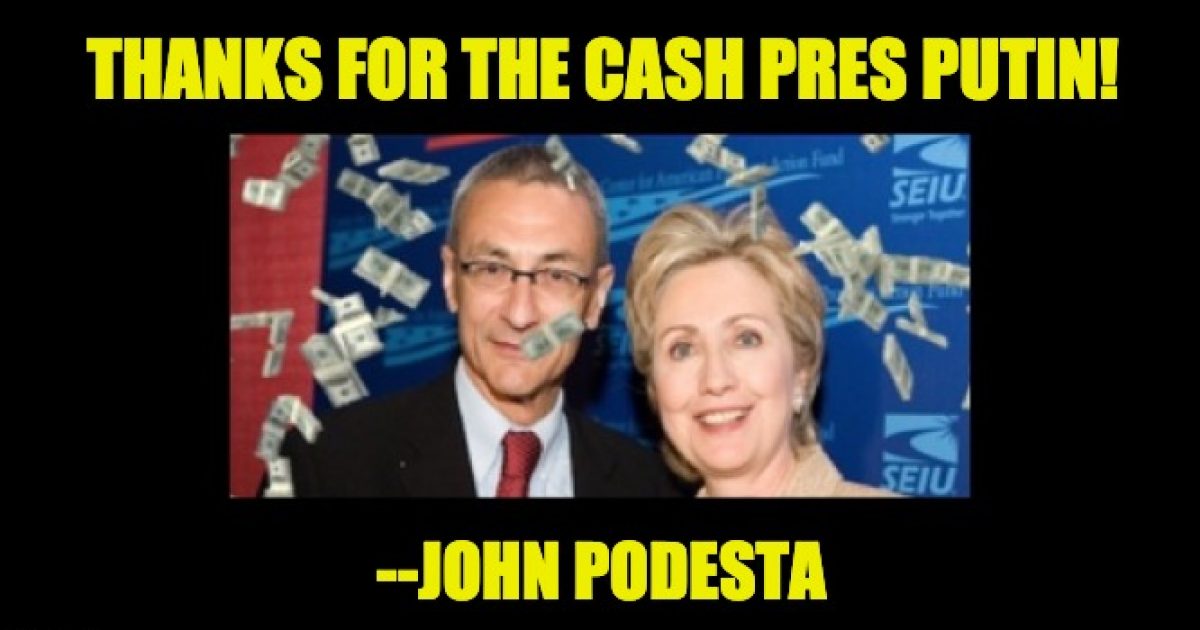 The liberals were right to be worried about all of those “Russia connections.” They just focused on the wrong campaign. Instead of focusing on President Trump and his campaign team the liberal conspiracy theorists should have been vetting their own side for Russia ties, specifically Clinton campaign CEO John Podesta. Now that the Muller report has been delivered and the feds have some free time, they should investigate the Russian connections that John Podesta failed to report.

Now, even more, has been revealed about the shady behavior of John Podesta, his Kremlin-connections and his cover-up

As we reported in March 2017 Hillary Clinton’s right-hand man and campaign chairman John Podesta, was on the board of 3 different companies that are closely related to a parent company by the name of Rusnano. Rusnano is a Russian state-run company that was founded by none other than Vladimir Putin and over the years has doled out tens of millions of dollars to the Podesta linked firms. The three companies that Podesta helped lead were Boston-based Joule Unlimited; Rotterdam-based Joule Global Holdings; Joule Global Stichting, the company’s controlling interest. All three companies are high-tech renewable energy enterprises. The information that came from the Daily Caller included:

Three months after Podesta’s arrival, Joule Unlimited accepted a 1 billion ruble investment from Rusnano, amounting to $35 million in U.S. currency. The firm also awarded a Joule board seat in February 2012 to Anatoly Chubais, Rusnano’s CEO, who has been depicted as a corrupt figure.

One potential legal problem for him relates to the time he joined former President Barack Obama’s White House staff in 2014 as a senior counselor and failed to reveal his 2011 Joule stock vesting agreement in his government financial disclosure form.

Further, he failed to disclose 75,000 common shares of Joule stock he received, as disclosed in a WikiLeaks email.

After Podesta began working at the White House, his lawyer indicated in a Jan. 6, 2014 email that he had not yet finished the legal work on the private transfer of the stock to a family-owned entity called Leonido Holdings, LLC.

Now the story has been updated thanks to Flag and Cross.com

In September 2011, eight months after Podesta joined the board of Joule Unlimited, Rusnano, a venture capital fund wholly owned by the Russian government, announced it was investing one billion Russian rubles, $35 million, in the company, which accounted for 46 percent of the $75 million invested in it up to that time from its launch in 2007. Founders Afeyan Noubar and Dr. David Berry invested an estimated $10 million in the 2007 first round. The venture firm Noubar heads, Flagship Ventures – now known as Flagship Pioneering – led a second round investment of  $30 million in 2010, as the Boston Globe reported.

Curiously, the CFIUS [The Committee on Foreign Investment] failed to initiate a review of the transaction despite statutory and administrative guidelines that any such transaction in which a foreign country or foreign company obtained more than a ten percent interest in an American company was reviewable.

But then again the Secretary of State in 2011 who would have a big say in any CFIUS decision was Podesta’s good friend Hillary Clinton.

All of the above examples may be entirely innocent, but they were, why did he “fail to report” so many of his Russian connections?