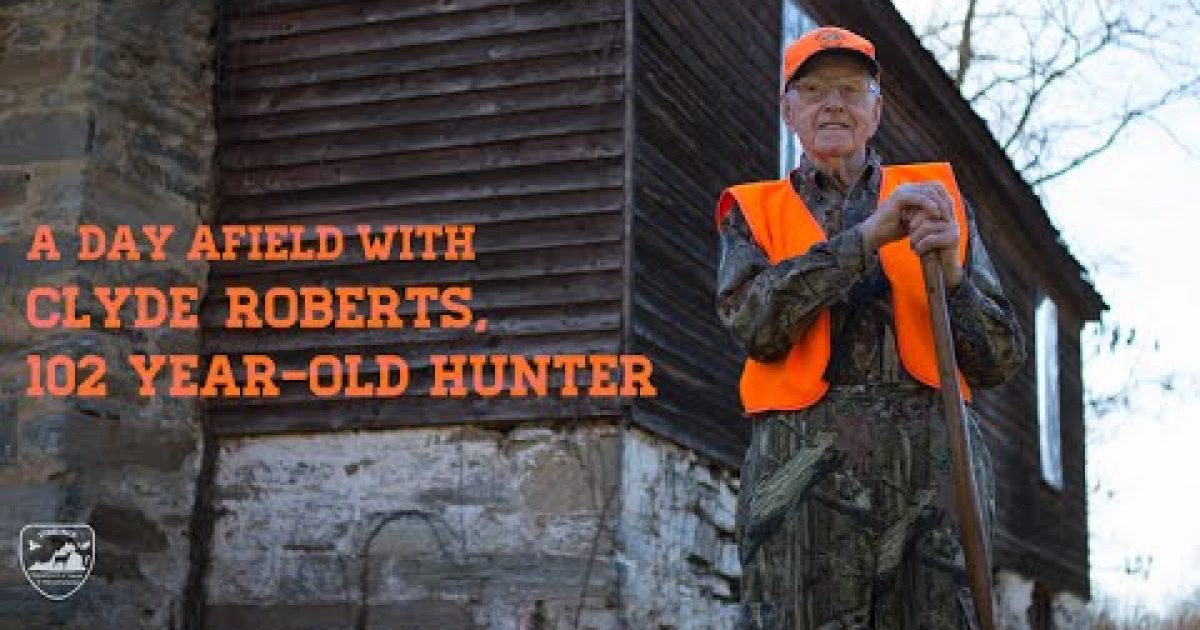 Hunter Clyde Roberts of Virginia just took a beautiful 8 point buck, the biggest in his hunting career, and he did it after climbing up into a tree stand!

Roberts may just be the oldest active hunter in the country and he is gaining notoriety for being an inspiration.

His doctor had told him he couldn’t climb anymore tree stands, but he had no problem climbing up and even carried his own rifle! Clyde is a hurdle jumper!

Clyde Roberts is a true inspiration on many fronts, the deer is just a piece of this fine example of a centurion.

Liberty Alliance CEO Jared Vallorani relates some personal experience with Clyde’s family and it says a lot about his fine character.

“I moved back to Lynchburg, VA in June of 2015 and one of the first people I met was Christin Roberts Elliott and her sons, Logan and Jack. Last year, I saw her post a picture of her then 102-year-old grandfather, Clyde, with a deer he had shot. I couldn’t believe my eyes! A 102-year-old-man not only still active, but hunting? I honestly didn’t think that was possible. Then again this year, Mr. Clyde Roberts took the biggest buck of his lifetime at 103. His granddaughter Christin was with him on this particular hunt.”

Christin had this to say after the hunt:

Papa likes to tell everyone that I got so excited after that. Of course I did! Not only had I been able to hunt with my 103-year-old grandfather but I had witnessed him take the biggest buck of his life. Most importantly, I had the hunt of my lifetime with him! I immediately called Dad and my oldest, who is a freshman at Montana Tech. I could not contain my excitement. It was one of the most awe-inspiring moments of my hunting career. I will never forget it. Papa is still on cloud nine and I have relived the hunt every night since.

“Life here in the Blue Ridge Mountains of Virginia is simple and quiet. People still go to church, treat each other like family, drop by just to say hi, farm, fish, fix it yourself, and of course – hunt. Clyde Roberts epitomizes this beautiful and rural part of Virginia. He too is a man of simple means; a quiet soul that gives thanks to God for all of his many blessings. And like any good man, he has and continues to pass down those family values, skills, patriotism and faith to his children and grandchildren. Though I haven’t met Clyde, I have witnessed his legacy through his granddaughter and great grandchildren. I’m proud to know his family and I hope I can be half the man Clyde is to my family. God bless you sir!”

Clyde seems to be beloved by all. (Photo Credit Allen Bailey)

Roberts is not new to accolades, he also took another 8 point buck shortly after his 100th Birthday.

While Roberts has been hunting for over 4 decades, he only started his hobby after he retired. He began hunting at the encouragement of his son Mike.

“I bought him a rifle when he retired to keep him busy,” Mike said in a 2015 interview. “My father is a very simple person and a devout Christian. He says the secret is ‘hard work and living for the Lord.’”

What an amazing Christian man. While most of his peers decades younger are barely getting around, Clyde Roberts is climbing trees, hiking through brush, and living life to its fullest extent as an accomplished hunter.

At 103 he seems to be fit as a fiddle and ready to brave many hunting seasons to come. I imagine the future holds many more tree stands and some more prized bucks.

Congratulations Mr. Roberts, you are quite the inspiration!

Grandpa of the year material for sure! Something tells me he is raising a high quality family:

The accomplishment even caught the attention of Speaker of the House Paul Ryan.

Cross-posted from Joe For America