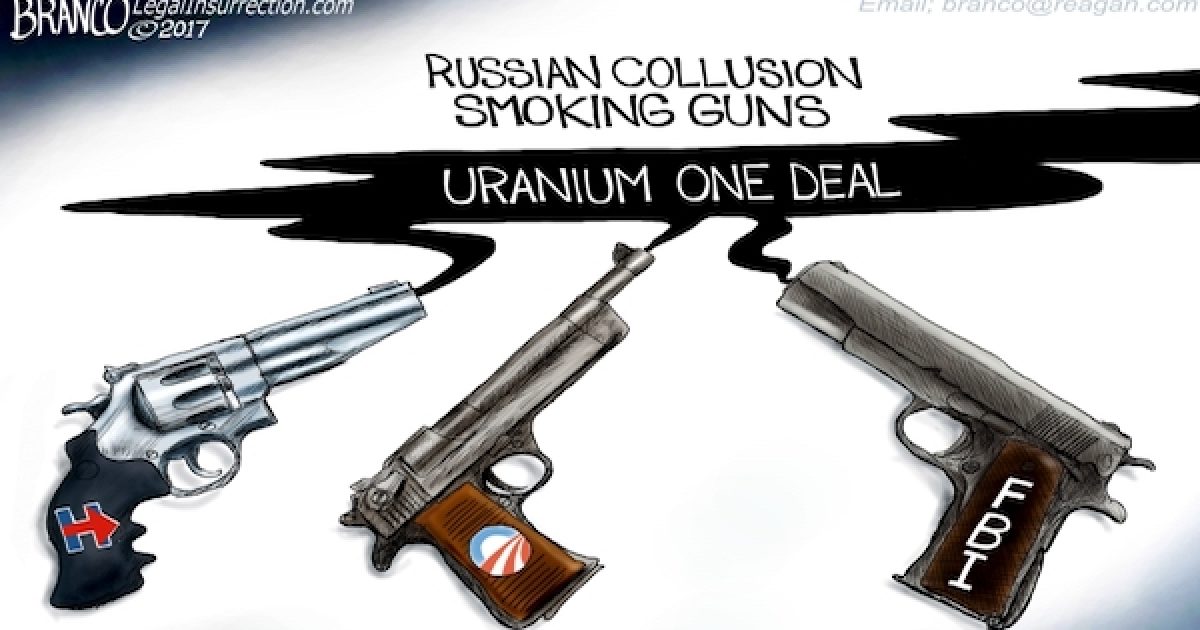 As much as the developing Uranium scandal points to Hillary Clinton trading in the security of the United States for family enrichment, the latest development from The Hill indicates that the FBI may have known Russia was trying to influence Hillary Clinton as soon as she arrived at Foggy Bottom.

Per the latest revelation, as soon as Hillary Clinton settled down in her new Foggy Bottom office, the FBI watched as Putin’s minions “unleashed an influence campaign designed to win access to the new secretary of State, her husband Bill Clinton and members of their inner circle, according to interviews and once-sealed FBI records.”

Some of Putin’s efforts were on the up and up, and some of it took the form off illegal espionage:

A female Russian spy posing as an American accountant, for instance, used a false identity to burrow her way into the employ of a major Democratic donor in hopes of gaining intelligence on Hillary Clinton’s department, records show. The spy was arrested and deported as she moved closer to getting inside the secretary’s department, agents said.

Russia hired a perfectly legitimate lobbying firm to help with influencing the Clintons. They just happened to pick a firm that was providing hundreds of thousands of dollars a year in free work to Bill Clinton’s global charitable initiative, and it helped the Russian company legally influence federal decisions that led to billions in new U.S.  nuclear business.

Agents were surprised by the timing and size of a $500,000 check that a Kremlin-linked bank provided Bill Clinton with for a single speech in the summer of 2010. The payday came just weeks after Hillary Clinton helped arrange for American executives to travel to Moscow to support Putin’s efforts to build his own country’s version of Silicon Valley, agents said.

Called “Skolkovo” and located near Moscow, it housed technology for developing bio-med, space, nuclear and IT technologies.

There is no evidence in any of the public records that the FBI believed that the Clintons or anyone close to them did anything illegal. But there’s definitive evidence the Russians were seeking their influence with a specific eye on the State Department.

“There is not one shred of doubt from the evidence that we had that the Russians had set their sights on Hillary Clinton’s circle, because she was the quarterback of the Obama-Russian reset strategy and the assumed successor to Obama as president,” said a source familiar with the FBI’s evidence at the time, speaking only on condition of anonymity, because he was not authorized to speak to the news media.

That source pointed to an October 2009 communication intercepted by the FBI in which Russian handlers instructed two of their spies specifically to gather nonpublic information on the State Department.

“Send more info on current international affairs vital for R., highlight US approach,” part of the message to the spies read, using the country’s first initial to refer to Russia. “… Try to single out tidbits unknown publicly but revealed in private by sources closer to State Department, government, major think tanks.”

Also at the time, the Russians observed the new “family businesses” run by former POTUS Bubba, the multimillion-dollar speech-making business, the Clinton family foundation and the Global Charitable Initiative, and saw it as a way try and get to the new Secretary of State.

“In the end, some of this just comes down to what it always does in Washington: donations, lobbying, contracts, and influence — even for Russia,” said Frank Figliuzzi, the former FBI assistant director for counterintelligence.

Figliuzzi supervised the post-arrest declassification and release of records from a 10-year operation that unmasked a major Russian spy ring in 2010. It was one of the most important U.S. counterintelligence victories against Russia in history.

Part of that ring was a  Russian woman posing as an accountant living in New Jersey named Cynthia Murphy. According to FBI  records and interviews, Murphy was closing in on accessing the Hillary Clinton-run State Department.

Murphy, living with her husband and kids in the New Jersey suburbs of New York City, reported a major breakthrough in February 2009 in an electronic message sent to her handlers: she had scored access to a major Democrat, FBI records state.

“Murphy had several work-related personal meetings with [a prominent New York-based financier, name omitted] and was assigned his account,” one FBI record from the case read. “The message accurately described the financier as  ‘prominent in politics,’ ‘an active fund-raiser’ for [a major political party, name omitted] and a ‘personal friend’ of [a current Cabinet official, name redacted].”

Multiple current and former officials confirmed to The Hill that the Cabinet officer was Hillary Clinton, the fundraiser was New York financier Alan Patricof and the political party was the Democratic National Committee. None of the Americans were ever suspected of illegalities, but the episode made clear the Russian spies were stepping up their operations against the new administration after years of working in a “sleeper” capacity, officials said.

When the spy case broke in 2010 Patricof said: “he believed he had been a victim of the spy ring, saying Murphy had worked for him but that he only talked accounting and not government or politics with her.”

The Hill contacted Clinton SPOX about the story but all he said was that any reports on the Russian spy case “was a partisan effort to distract from the controversy around Moscow and President Trump.”

“Nothing has changed since the last time this was addressed, including the right’s transparent attempts to distract from their own Russia problems, which are real and a grave threat to our national security,” he wrote in an email to The Hill.

But when the spy case broke Hillary Clinton’s office distributed a statement that said that there was no reason to she was the target of this spy ring. But the documents and agents who worked the case said the spies were targeting the State Department trying to get any information about the new Obama Administration’s foreign policy.

The FBI documents show exactly what Murphy’s Russian handlers wanted her to get from a Clinton-tied donor she had befriended. “Maybe he can provide Murphy with remarks re US foreign policy, roumors (sic) about White House internal kitchen, invite her to major venues,” one FBI document quoted the Russians as saying.

By 2010, the Russian SVR urged Murphy to consider taking a job with a lobbying firm because “this position would expose her to prospective contacts and potential sources in U.S. government,” the FBI affidavit read.

Figliuzzi said it was the FBI’s belief that Murphy wasn’t going to risk taking a job inside the State Department, where the vetting process might unmask her true identity. So she aimed for a private sector job where “she could get next to people who had the jobs who could get the information she wanted from State,” he said.

According to Figliuzzi by the summer of 2010, FBI agents feared Murphy was getting too close to posing a security concern to Hillary Clinton. So they arrested the entire ring of 10 spies and quickly expelled them.

“In regards to the woman known as Cynthia Murphy, she was getting close to Alan [Patricof}, and the lobbying job. And we thought this was too close to Hillary Clinton. So when you have the totality of the circumstance, and we were confident we had the whole cell identified, we decided it was time to shut down their operations,”

A day after the arrests of the ring of ten spies was arrested,  something else came to the attention of the FBI. Happening in Russia former POTUS Bubba Clinton, collected a cool $500K for a 90-minute speech to Renaissance Capital, a Kremlin-connected bank, then went to Putin’s home for a meeting. Oh and that bank that gave Bubba the half-million…was promoting the Uranium One deal’s stock.

The FBI thought the Bubba payday was a bit strange because at the time the State Department was one of the agencies evaluating and making a recommendation regarding if the  U.S should approve the Russian nuclear company Rosatom’s purchase of a Canadian company called Uranium One, which controlled 20 percent of America’s strategic uranium reserves.

Another issue “was the Russian company TENEX’s desire to score a new raft of commercial nuclear sales to U.S. companies. TENEX for years was selling uranium recycled from old Soviet warheads to the United States. But that deal was coming to an end and now it needed a new U.S. market”

And then there was Secretary Clinton promise to Russian leaders to secure American companies support for its new high-tech hub outside Moscow known as Skolkovo. The Clintons used Skolkovo to their greatest advantage:

Away from Bill Clinton’s check and the breaking news of a spy ring, the FBI had another major investigation underway where the Clinton name was surfacing.

Since 2009, the FBI had an undercover informant gathering evidence of a massive bribery and kickback scheme inside the Russian nuclear energy firm TENEX and its American arm TENAM.

Years later, FBI agents would help the Justice Department bring charges against the Russian nuclear industry’s point man in the United States, TENEX director Vadim Mikerin, as well as a Russian financier and an American trucking executive whose company moved Russian uranium around the United States.

The story of Hillary Clinton and Russia continues to unravel, I have been told that there is much more coming from The Hill on this story. Someday the MSM may even decide to cover it—nah, they are too vested in protecting her.