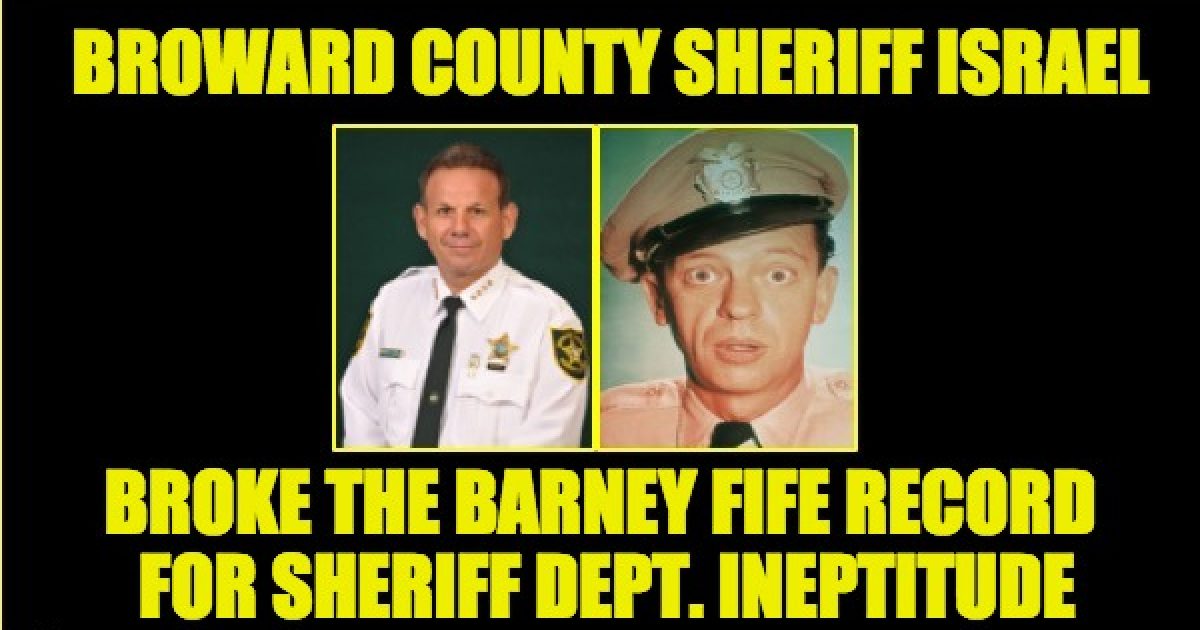 A new level of ineptitude has reared its ugly head in 2018, and the ineptitude proved that old axiom that truth, is much stranger than fiction, at least in Florida’s Broward County Sheriff’s Department.

For decades, the American idea of a bumbling and ineffective police officer was the classic Don Knotts television character Deputy Barney Fife, who would famously have to ask his sheriff if was allowed to carry his own gun. Now,  seems that

But the incompetence of the fictional Barney Fife has been surpassed by the wholly incapable Sheriff’s Department of , I mean, Broward County, Florida.

Led by the egotistic but inept Sheriff Scott Israel, this department is culpable for the tragic deaths of 16 students and a coach at Stoneman Douglas High School in Parkland, Florida which happened back in February. Not only did the Sheriff’s department participate in a controversial and misused program that created an incentive for the school to allow criminal students including the Parkland shooter to walk free, but their previous interactions with the shooter, Nikolas Cruz, were wholly ineffective and suspect.

Making matters worse, a video was released recently that showed Sheriff’s deputies waiting outside of the school where Cruz was slaughtering innocent children, cowering in fear.

As if we didn’t have enough reason to doubt that the Broward County Sheriff’s Department does not have the same high standard of honor as the vast majority of law enforcement organizations in this country, another bit of corruption is surfacing today that pretty much seals their disgrace.

It’s kind of an amazing thing that three months after the Parkland school shooting, Broward County Sheriff Scott Israel is not only still a gainfully employed man, but he holds the same position he did when the shooting occurred.

Now comes news that the disgraced school resource officer [Scot Peterson]who refused to enter Marjory Stoneman Douglas High School during the shooting may have covered up an alleged sexual assault by Israel’s son during a bullying incident at the same school where the shooting happened.

According to a report by WPLG in Miami:

Parents are calling for an investigation into an incident four years ago where Deputy Scot Peterson may have altered a report involving one of Israel’s children so that no legal action was taken.

Peterson, you may remember, was heavily criticized by Israel but not fired for staying outside the school while students were being killed. Instead, he was allowed to resign, entitling him to a six-figure public pension.

Just how bad was it? Painfully bad.

“The case involved two 17-year-old students bullying a 14-year-old freshman, with one holding down the younger boy by his ankles while the other kicked the victim, grabbed his genitals and then took the victim’s own baseball bat and began shoving it against his buttocks, simulating rape, through the boy’s clothes,” WPLG reported.

“One of those assailants, the boy who allegedly held down the victim, was Israel’s son, Brett. Defense attorney Alex Arreaza, who represents shooting victim Anthony Borges, who was shot five times in the Valentine’s Day massacre but survived, said the case could have led to felony charges,” the outlet continued.

“He could be charged with a lewd and lascivious (conduct charge), and I’m being conservative,” Arreaza told WPLG.

But that’s not what Peterson’s report said. Instead, he put it down as a “simple battery,” which only resulted in a three-day suspension for the alleged attackers.

A video of the news report is below.

This incident proves that if you get to pick who is going to beat you up and molest you, try and make sure that the person doing it isn’t the son of the Broward County Sheriff.

And if I ever visit Parkland, Florida, I fully hope to see Scott Israel wearing a funny hat and uniform, repeatedly asking the same question, “Ju wan fries wit dat?”