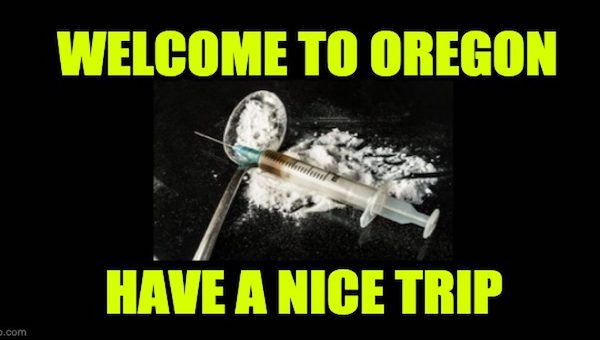 In the extremely liberal state of Oregon, during the 2020 election, citizens had the chance to vote on a measure decriminalizing the possession of small amounts of hard drugs such as heroin, coke, and meth. It was called Measure 110, and 59% of Oregonians voted YES. And wouldn’t you know it, since it was implemented overdoses soared 700 percent.

Who’d have thought it?

After passing Ballot Measure 110 in 2020, it went into effect in February of last year and was the first of its kind in the U.S. It is no longer a felony or a misdemeanor to possess drugs in Oregon. The worst druggies can get is a $100 fine.

But now, overdoses are soaring in the state.

Yet Lily Morgan, a Republican state politician representing Grants Pass, said lives are being lost while the state waits for the ballot measure to have a positive effect.

‘Director, you’ve mentioned a couple of times that you’re waiting to see – and yet we have overdoses increasing at drastic rates,’ she said.

‘How long do we wait before we have an impact that we’re saving lives?’

The director is Steve Allen, Oregon’s behavioral health director, who supports the legalization bill. Someone should remind them of the case of Lenny Bias, the college basketball star who was drafted by the Boston Celtics as the second overall pick in the 1986 NBA draft. On the draft day, Lenny Bias celebrated his future NBA stardom by trying cocaine for the first time in his life. Lenny’s heart didn’t like the coke and stopped working. He was pronounced dead of cardiac arrhythmia at the too-young age of 22. All because he tried coke once.

Allen has admitted that the state has seen a “dramatic increase” in deaths. He also claimed,” ‘So it’s an experiment. I think we’ll know more in a few years.” He might be correct. The way things are going right now, all the drug users will die in “a few years.” A sad result, but it will get rid of drug use in the state

It makes one wonder if the state’s organization of funeral directors helped push this measure through. After all, they are the only ones benefitting from this imbecilic measure.

Much of this post was first seen at iPatriotl