In Politico Rep. Steve Israel Whines He Supports State of Israel (The Dem Doth Protest Too Much) 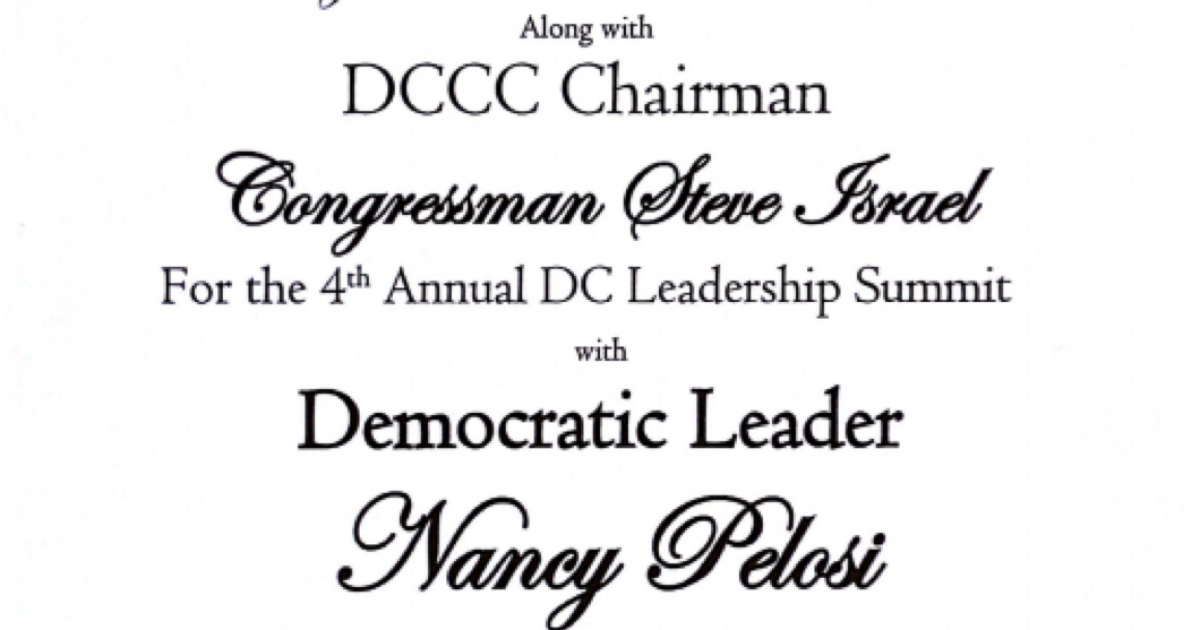 Last week Rep. Steven King (R-IA) brought up an issue in public that I
have been asked to address countless times in private,  “Here is what I
don’t understand, I don’t understand how Jews in America can be
Democrats first and Jewish second and support Israel along the line of
just following their President.”

Congressman Steve
Israel (D-NY) self-appointed himself as chief Jew in the Democratic
Party caucus and decided to take Rep. King on. In Politico Thursday he
claimed Rep. King entered the realm of “Halacha—Jewish law—on what makes
a good Jew.” Actually Rep. King never mentioned what makes a good or
bad Jew, but Steve Israel trying to turn around King’s words simply said
he did.

Rep. King wasn’t even talking about Jews in
Congress, but he could have been. In the six and half years Barack Obama
has been president I have not seen one Jewish Democrat in congress
standing up in public or on the floor of the House or Senate to disagree
with the President’s anti-Israel policies.  Sen. Schumer did say
something on radio once, but it was on a Jewish radio show with a
limited audience.

Especially
galling is pronouncements by people who’ve never been to Israel that
Democrats like me are failing the loyalty test. I am proud of travelling
to Israel countless times, and I’m proud of all the work I have done to
strengthen this alliance with Israel by working with members on both
sides of the aisle.

However
being a supporter of Israel goes way beyond simply traveling to Israel.
Since Rep. Israel is a huge expert of Jewish law (or at least claims to
be) he probably knows that it says in the Torah, (Leviticus 19:16) “Do
not stand idly by while your neighbor’s blood is shed.”

Rep. King’s statement is correct especially in the case of Rep. Steve Israel.


Steve Israel represents New York’s 3rd Congressional district, which at 22% is the third most Jewish district in America, and because it was the NY Democrat who objected to Rep. King’s statement, it would be pertinent to look at Steve Israel’s record of politics vs. support for Israel.

After his inauguration, President Obama tried to legitimize the group J-Street as an important voice of the Jewish community. Even Alan Dershowitz a strong supporter of Obama, called J-Street ““neither pro-Israel nor pro-peace.” Funded by George Soros, since its inception, J-Street tried to fight against Iranian sanctions and even tried to get the Congress to accept the Goldstone Report, which accused Israel of war crimes and was discredited by its author.

Despite its anti-Israel activity, Rep. Israel lent his name (with other Democrats) to J-Street’s first ever Gala Dinner. And yet, Honorary Host Committee Rep. Israel still publicly claims to be a big supporter of Israel.

As President Obama and his Secretary of State Hillary Clinton began to implement what some considered an anti-Israel foreign policy during the first Obama Administration, Steve Israel, who never before had been reluctant to speak out in support of Israel, was strangely silent. Even as Republicans began to stand up to support the Jewish State, Congressman Israel said nothing. Even in May 2010, when President Obama demanded that negotiations begin rather than end with Israel ceding the disputed territories of Judea, Samaria and Jerusalem, there was plenty of criticism from but not from then-DCCC Chair Steve Israel.

In July 2011 when President Obama got caught trashing the Israeli Prime Minister on a open microphone, Rep. Israel said nothing, he was also silent in 2010 when Netanyahu and a delegation was visiting Obama in the White House and when the President made the unprecedented undiplomatic move of standing up declaring “I’m going to the residential wing to have dinner with Michelle and
the girls.” I’m still around, Let me know if there is anything new,” leaving the entire stunned Israeli delegation to stew in a conference room for over an hour.

During the 2012 election, Rep. Israel joined House Minority Leader Nancy Pelosi Reps Andre Carson and Keith Ellison in a Democratic Party fundraiser for CAIR, which during the Holyland terrorist funding trial was name an unindicted co-conspirator because of its connections to the anti-Israel terrorist group Hamas, and the Muslim Brotherhood.

There are other examples such as his support of the anti-Semitic Occupy Wall Street as DCCC chair but lets skip to the recent Bibi speech to a Joint Session of Congress as in the Politico piece Israel brags about being on the committee who escorted the Premier into the House chamber, he didn’t mention that before the speech Rep. Israel sent a letter to John Boehner that said, in part:

During that same period, Rep. Israel was silent about Pres. Obama’s apparent interference with the Israeli election by allowing former Obama strategist Jeremy Bird to work with the groups One Voice and V15 in Israel to replace the Netanyahu government in March partially funded by Obama’s State Department.

Like Rep. King, I would never question Rep. Israel’s commitment to Judaism, honestly that is between him and his maker. Personally I do not even question his commitment to the Jewish State. As both a Jew and one of his constituents, I do however question his priorities. What Steve Israel has proved over and over again during the tenure of Barack Obama that protecting his political ambitions by protecting the President’s anti-Israel policies is more important than speaking out and demanding Obama change the way he treats an ally like Israel.

Rep. Israel seems to have taken Rep. King’s words personally but to paraphrase Shakespeare, The Congressman doth protest too much, me thinks.”