Is Debbie Wasserman Schultz Involved In Cover-up of Her IT Guy’s Crimes? 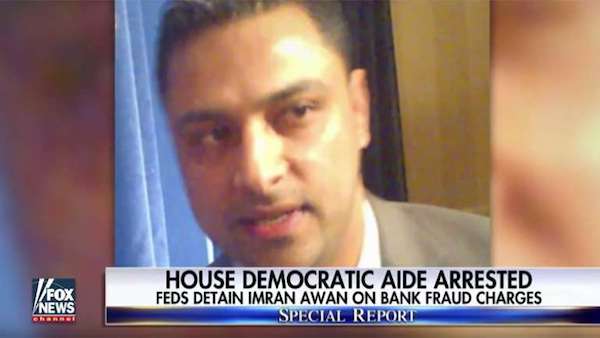 Why is the media ignoring what possibly can be a major DNC Scandal involving former Democratic National; Committee chief Debbie Wasserman Schultz (D-FL)? Why did she continue to keep Imran Awan as an employee after he was banned from working for the congress? Why was he trying to flee the country?  How come Wasserman Schultz threatened the head of the Capitol Police if he didn’t return her broken hard drive? And is it possible that Imran Awan was really behind getting the DNC information to Guccifer2 and Wikileaks? Those are just some of the questions being ignored by most of the MSM.

Imran Awan Debbie Wasserman Schultz’s IT guy has long been under suspicion for a series of very serious crimes. However, Schultz ran interference for Imran Awan for months and even fought to keep investigators from gathering evidence of his When confronted on her behavior Schultz dissembled and continued to make it harder for everyone to do their jobs.

Thankfully, Imran Awan, the man who Schultz worked so hard to protect made one too many mistakes and was caught attempting to flee the country and return home to Pakistan.

Geraldo Rivera wonders if Imran Awan, the real leaker of the DNC and Clinton campaign emails.

“Well, now you have a possible suspect. Here’s the corrupt IT guy standing on the shoulders of Debbie Wasserman Schultz arrested at the airport trying to flee, charged with stealing hundreds of thousands, maybe millions, of dollars.”

See below starting at 2:11 in the video:

Sadly, even though Awan was captured several days ago and the crimes against him are deadly serious, the liberal media has had nothing to say about the story.

The news is just getting noticed by some of the network giants, but BizPac Review has been chronicling this unbelievable story for months, thanks to the exceptional investigative reporting of the Daily Caller News Foundation.

As of this writing — more than 3 days after the latest news broke — liberal media outlets CNN, the Washington Post, and the New York Times — STILL have not covered the stunning developments. Conservative radio host Rush Limbaugh is disgusted that the mainstream media are apparently ignoring this story simply because it makes Democrats look bad.

Here’s what’s happening: Imran Awan, the former IT employee of Debbie Wasserman Schultz, was arrested at Washington Dulles Airport on Monday trying to flee the country on a flight to Pakistan after wiring $283,000 to the country. On July 23, the FBI had seized several smashed hard drives from Imran’s home.

Awan’s wife had already fled the country in March 2017 after authorities found $12,000 in cash hidden in her suitcase at the airport.

In 2005 Imran Awan got himself a job with Debbie Wasserman Schultz. In the months following, several of Awan’s family members got jobs with other Democrat legislators even though it seems they didn’t actually do any work for them. By March 2017 Awan was still working as a technology adviser but only for Wasserman Schultz and he’d  he’s been blocked from accessing the House computer system since early February.

Politico reported that Awan earned nearly $2 million since 2004 as an IT support staffer for House Democrats. His wife Alvi began working for House Democrats in 2007 and earned more than $1.3 million since then. Their salaries were split among multiple lawmakers’ offices.  But despite a making all that money, Awan declared bankruptcy in 2012 with more than $1.1 million in debt.

During the same period, Awan found his way onto the FBI’s radar after making some shady mortgage deals (just like Bernie Sanders’ wife).

While there is much evidence that the Awan’s financial deals were indeed criminal, there was a much more worrisome problem.

A report from BuzzFeed in early February said House staffers were under investigation for stealing equipment, and Politico reported Imran Awan was one of those under investigation. Because of the investigation, almost all the congressional offices ended their relationship with Awan, but that Wasserman Schultz’s office continued to keep him on the payroll until the day of the arrest.

If the government’s suspicions are warranted the data breach could be incredibly massive. Awan led a team of at least 4 or 5 IT staffers who worked for dozens of House Democrats and the government believes that they may have stolen crucial intelligence from all of those Democrats over the course of more than a decade.

This is a perfect example of how Democrats are treated differently than Republicans. Where is the mainstream media? Are they forbidden to talk about anything other than Russia?  Why isn’t there a special counsel?