Finally, our long national nightmare is over! 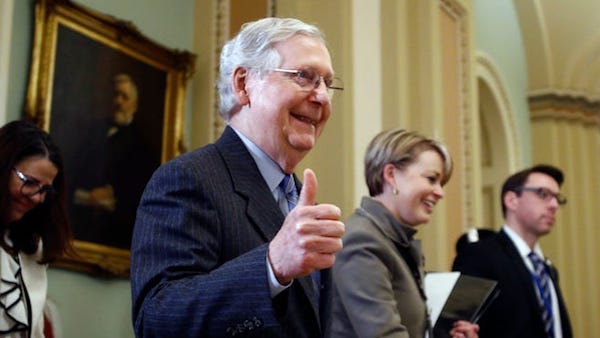 Thankfully this impeachment farce is over, and the President is acquitted (that’s acquitted, FOREVER Nancy). But there are still some critical, lingering questions that must be answered.

Now that there are no longer any impeachment hearings or trial arguments every day, I am worried about losing sleep. What I can put on TV to help me fall asleep in the afternoon for my nap. On the bright side, those horrible nightmares may stop. While sleeping during the hearings  I would have the most vivid dreams that my eyes would bug out and I would start lying all the time. Where did those dreams come from??

Can President Trump write an executive order forcing Nancy Pelosi and Adam Schiff to wear dunce caps when Congress is in session?

For the past three years, Senate Minority Leader Chuck Schumer has thought about nothing except bashing President Trump. I wonder if he can find New York State on a map? Can he find the United States on a globe? And why can’t someone teach Schumer that glasses aren’t meant to be worn on the tip of one’s nose? He looks like an old schoolmarm (and acts like America’s evil Step-Mother).

Before the Trial, the Democrats respected Alan Dershowitz. They started to hate him because Dershowitz defended the President. Will they now start to like him again?

Is anybody shocked that Mitt Romney voted to convict President Trump on one count? Face it, Romney began to spew hatred of Trump as soon as it looked as though he would get the GOP nomination. That didn’t stop him from begging for the Secretary of State job or accepting the President’s endorsement of his candidacy for Senate.

Mitt Romney absolutely despises that Donald Trump was elected POTUS & he was not. The sore loser mentality launched this sham impeachment & corruptly rigged & jammed it through the House. It looks like Schiff recruited himself a sore loser buddy on the GOP side to play along.

When he announced his decision to vote against the President, Romney kept talking about his faith. I, too, am someone who has a firm belief in God. If Romney referred to Chapter 19 of the book of Vayikra, known in English as Leviticus, it talks about not committing injustice in judgment, nor bearing a grudge against the members of your people. When one looks at Romney’s hatred of Trump, and his decision to convict, it seems that Romney ignored Chapter 19.

Even conservatives believe that Mitch McConnell did an excellent job of managing the Senate and moving the body toward an acquittal. Are we still supposed to call him cocaine Mitch?

I wonder if the party will punish Romney by making him stand in the corner.  I doubt it because that would make him look like he is participating in the Iowa Caucus. And one day soon we will have the results of that caucus.

Speaking of the results of the Iowa caucus, folks, what do you think will happen first?

Does the Democratic Party establishment regret the decision to go after Trump? After all, this impeachment farce absolutely destroyed the candidacy of their favorite guy, Joe Biden.

Even though he didn’t have the votes for witnesses or the votes to convict Senator Schumer tried his hardest to extend the impeachment as long as he can. He was able to delay the President’s acquittal to the day after the State of the Union Address.  Is he close to the world record for being petty?

No, he isn’t close.  When nasty Nancy ripped up the copy of the State of the Union Address, Speaker Pelosi broke the record for pettiness. Wouldn’t it be fun if, at next year’s SOTU, President Trump gave Pelosi the transcript of his speech on an iPad? I, for one, would love to see her struggle to break the screen when Trump’s speech was over.

Doesn’t Nadler have anything else to do? How about trying pass bills to help his constituents before trying to impeach the President again?  As Albert Einstein once said, “the definition of insanity is doing something over and over again and expecting a different result.”

He acts like he is, but Is Adam Schiff, the bastard child of Darth Vader and the Grinch who stole Christmas?

After reading the reports and watching the endless droll of the Senate trial, I am finally convinced that President Trump did do something wrong!  No, Not his discussion with the Ukrainian President as I’ve written before, I believe that conversation was proper and justified. What Trump did wrong was to hire John Bolton as national security advisor. I suppose the President couldn’t foresee that Bolton would be the kind of disloyal creep that would throw him under the bus to sell books. But that’s what he is.

Finally, does anyone want to chip in with me? I am going to try and outbid Russia for Alaska.