A Detailed Timeline Of Democrats’ 3 Years of Partisan Hatred 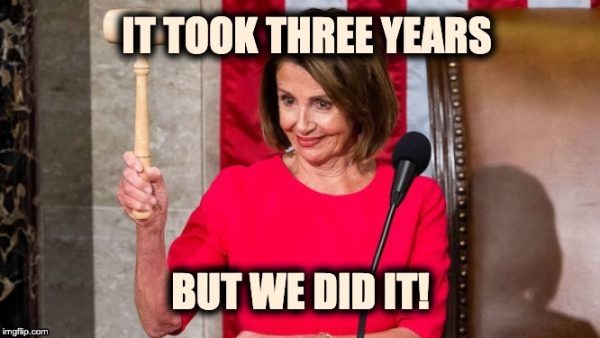 Twenty-one years after Bill Clinton’s impeachment and 3 years after Hillary Clinton’s well-deserved loss, Washington Democrats are exacting political revenge on behalf of the Clintons by impeaching Donald Trump for winning the 2016 election. That is his real crime.

Democrats deny it, but it’s evident that their hatred of Donald Trump is why we are about to see “the only pure partisan impeachment vote in the history of the United States.”

From the moment violent riots broke out in leftist strongholds after Donald Trump emerged victoriously, Democrats plotted his forced removal or impeachment.

Before members of the electoral college voted on December 19, 2016, Hollywood celebrities produced a video begging electors to rig the vote against Donald Trump. As an elector, Nancy Pelosi’s daughter led an effort to undermine the election, a scheme backed by Hillary Clinton’s campaign manager. And in what has to be the epitome of tortured logic, The Atlantic’s Peter Beinart argued that the Electoral College should deny Trump the presidency because if Congress impeached him, Trump might refuse to leave office.

When Congress met on January 6, 2017, to certify Donald Trump’s 2016 election victory, Democrats objected 11 times, with none other than Joe Biden gaveling down their “impossible dream” of blocking the certification of results.

Before he was even inaugurated, Democrats in Congress, like John Lewis and Jerry Nadler declared Donald Trump, an “illegitimate president.” Jamie Raskin proposed impeachment on January 15, 2017. About 70 House Democrats boycotted Trump’s inauguration.

Minutes after Donald Trump was sworn in, The Washington Post reported that Democrats’ “campaign to impeach President Trump has begun.” Enraged leftists cut a swath of destruction through Washington, D.C., burning cars, smashing windows, and injuring police officers. Madonna admitted, “I have thought an awful lot about blowing up the White House.” The media wondered whether “Donald Trump be assassinated, ousted in a coup, or just impeached?”

10 days after Trump’s inauguration, Mark Zaid, the man who would one day become the attorney for the CIA’s fake whistleblower, tweeted that the “coup has started” and “impeachment will follow ultimately.”

By May 2017, just four months into his presidency, numerous Democrats were openly discussing impeachment. Rep. Al Green called for impeaching President Trump on the House floor on May 17, 2017. A few days later, CNN’s Kathy Griffin posted a video of herself holding a replica of Trump’s bloody, severed head. A few days after that, Johnny Depp asked a crowd, “When was the last time an actor assassinated a president?”

In July 2017, removing the president via the 25th Amendment went from being a left-wing fantasy to an idea given serious consideration by the media. “We will get rid of him,” Zaid weighed in again, adding, “I predict CNN will play a key role in Donald Trump not finishing out his full term.”

In August 2017, Maxine Waters appeared on ABC’s The View to make it clear that she was “not running for anything except the impeachment of Trump!” Glamour magazine named her Woman of the Year.

Leading up the 2018 election, Nancy Pelosi did her best to hide her colleagues’ intentions. She claimed impeachment was not a priority for Democrats and promised that before impeachment could happen, “It would have to be bipartisan, and the evidence would have to be so conclusive.”

Things changed after Democrats won control of the House, and The Socialist Squad seized power in 2019. Moments after she was sworn into Congress, Rashida Tlaib unleashed a rant that was caught on video: “We’re gonna go in there, and we’re going to impeach the motherf***er!” Her campaign turned it into a t-shirt.

On July 17, 2019—before the release of the Mueller Report and before President Trump’s phone call with Ukraine—the number of House Democrats supporting impeachment hit 95.

Then, at long last, the moment had arrived. Resistance Messiah Robert Mueller was ready to issue his report and testify to Congress. His years-long investigation was complete, and he had the goods on Trump’s treasonous collusion with Russia! Or so they had hoped.

In reality, the Mueller Report was a dud, and Mueller’s testimony was a disaster for Democrats. Chief Collusion Conspiracy Theorist Adam Schiff was going to have to find a different way to “send that charlatan in the White House back to the golden throne he came from.”

On August 28, 2019—12 days before an inspector general would inform the House Intelligence Committee about an unspecified whistleblower complaint—Schiff tweeted, “Trump is withholding vital military aid to Ukraine, while his personal lawyer seeks help from the Ukraine government to investigate his political opponent.” The plot never changed, because this impeachment sham was rigged from the start.

We know Schiff lied about his contact with the CIA “whistleblower,” but we still don’t know the extent of their collusion. Judging from Schiff’s tweet, it was significant. Despite the evidence revealed in hours of testimony over the past couple of months, Democrats have stuck with the fake scandal that Schiff orchestrated in August.

Make no mistake: this impeachment is not about aid to Ukraine. It’s not even about stopping Joe Biden’s corruption from being exposed. This impeachment is about one thing and one thing only, just as it has been since before Donald Trump was even sworn in as president: hatred.

Democrats hate President Trump. And while today is a triumph for that hatred, tomorrow is one day closer to the American people having their say in November 2020.

Will Democrats finally accept the results then? Don’t count on it.

By Donald J. Trump For President Via Mental Recession

Immigrant bought land where he crossed the border illegally, allows others to do the same
May 15th, 2021 Liberty Unyielding