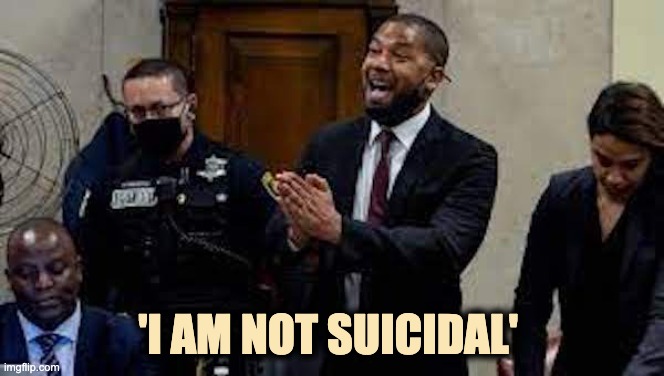 When the judge sentenced Jussie Smollett in court on March 10, 2022, the actor immediately went crazier than a soup sandwich.

On January 29th, 2019, in Chicago, TV star Jussie Smollett, who is openly gay,  told police he was attacked by two men. Smollett claimed the attackers yelled, “this is MAGA country,”  hurled racial and homophobic slurs at him as they beat him up and placed a noose around his neck. Within weeks the CPD determined Smollettt’s story was a hoax.

Smollett went from a publicly adored victim and proof of the fake liberal story that anyone who supports Trump is an evil bigot to a ridiculous laughingstock in a matter of days. And he’s STILL refusing to break character and admit the facts.

Jussie Smollett easily fooled an adoring liberal media despite his story being unbelievable from the start. It starts with a wealthy TV star wanting to get a sandwich from the local Subways at  2AM. That he decided to walk to the Subways when the temperature was -16 degrees should have raised questions. Instead, they bought his pile of bull turds without asking any questions. After all, it was the perfect liberal media story— a victim who was both gay and black attacked by two white racists who supported Donald Trump. If Smollett didn’t make it up, someone in the liberal media would have.

Two weeks after the supposed attack, the real story began to leak out:

Multiple sources have told ABC7 Eyewitness News that police are investigating whether Smollett and the two men staged the attack allegedly because Smollett was being written off of “Empire.”

After being convicted in December 2021, Jussie went to court for his sentencing on March 19.

He starts off calm, but when he was being led out to his home for the next 150 days, Smollett flew off the handle screaming, “I’m not suicidal.” Who knows why he kept screaming that phrase.Nobody ever thought he would commit suicide. Instead, if he pulled a Jeffry Epstein in jail, people’s first reaction would be that he hired two white guys wearing “Trump ’24” hats to do the nasty deed.

I hope Jussie Smollett does not kill himself. But that doesn’t change his lights are on, but clearly, no one is home.

Jusssie, enjoy your temporary home. I am sure the news media will cover you after your release on August 7th.