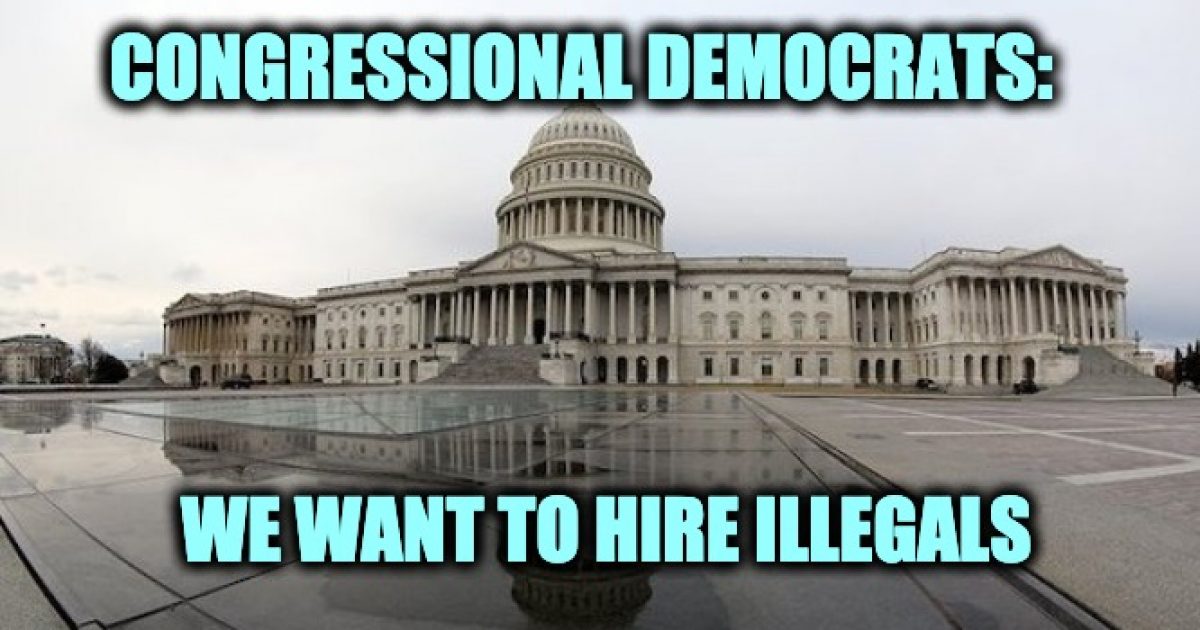 Illegal aliens are now eligible for driver’s licenses in some states, and in March the House voted in favor of extending the vote to people who disregarded the law and entered the United States illegally. Now there’s another bill trying to give Illegal Aliens the same rights as legal Americans has advanced through the House Appropriations Committee by a party-line vote. The bill would lift a ban on Deferred Action for Childhood Arrivals (DACA) recipients from being able to apply for positions on the staffs of elected officials.

U.S. law doesn’t “pick on’ dreamers or illegal immigrants per se.  It expressly bars most non-U.S. citizens from working for the feds.

Annual appropriations enactments prohibit the use of funds for the compensation of any federal government employee or officer in the continental United States unless that person is (1) a U.S. citizen, (2) an LPR [legal permanent resident] who is applying for naturalization, (3) a person admitted as a refugee or granted asylum who has filed a declaration of intent to become an LPR and eventually a U.S. citizen, or (4) a non-citizen, U.S. national who owes allegiance to the United States (e.g., a person born in American Samoa).

Rep. Lucille Roybal-Allard (D-Calif.), a co-sponsor of the bill, celebrated its passage as a means to allow Deferred Action for Childhood Arrivals (DACA) recipients to “contribute to our great democracy.” You know, something they could already be doing if they had taken the time to become legal immigrants.

“By allowing DACA recipients to work on Capitol Hill,” Roybal-Allard stated, “we are ensuring that they have the opportunity to learn and to contribute to our great democracy and represent their communities in Congress.”

Not that Roybal-Allard cares but there are a limited amount of Congressional staff positions available.  Hundreds of applicants are turned away every year. Every time an illegal alien gets a Congressional job, they are taking it away from someone who is a citizen, is here legally, or some other kind of U.S. National.

The text of the bill explains that “an entity may use amounts appropriated or otherwise … to pay the compensation of an officer or employee without regard to the officer’s or employee’s immigration status.”

“DACA recipients have a legal right to work in the U.S. & contribute to our economy and our communities,” chairwoman Nita Lowey (D-NY) said. “It is well past time they are able to contribute to the business of Congress as well.” Lowey added that the vote shows “House Democrats are leading the way to fight for the people.”

Sorry Nita, what the vote shows is that House Democrats are putting the people who were brought here illegally before those who are supposed to be here.

In April Kamala Harris introduced a similar bill in the Senate:

“The giant sign outside my office says ‘DREAMers Welcome Here’ because we know and value the contributions that these young people have made to their communities,” Sen. Kamala Harris, D-Calif., one of the bill’s sponsors, said in a news release. “But right now, those same young people are banned from giving back to their country by working for Congress. That has to change. Government works best when it reflects the people it represents. Our nation’s DREAMers are some of our best and brightest, and it’s time they had the opportunity to get a job or paid internship on Capitol Hill.”

Vermont Senator Bernie Sanders went a step further. He actually hired Belén Sisa, a millennial Arizona left-wing activist, to serve as his deputy national press secretary during the 2020 campaign. Sisa can’t actually vote for her own boss … because she’s a Dreamer. If she is smart, she won’t vote for Sanders even if she was allowed to vote.

The crazy part of this effort is that even if it passes the full house, it won’t pass through the Senate. It’s political Kabuki theater. There is no way the bill gets the sixty votes for cloture and a final vote on the Senate floor.  I suspect that the supporters of the bill in either house doesn’t expect it to come up for a Senate vote either.

Instead of working with President Trump and the Republican Party to come up with a compromise that protected both America’s borders and the dreamers, Congressional Democrats only care about creating one-sided bills that will never pass but allow them to call the President and Congressional Republicans names in an overdramatic manner.