More Than HALF Of People In Huge Illegal Alien Caravan Heading To U.S. Are Sick 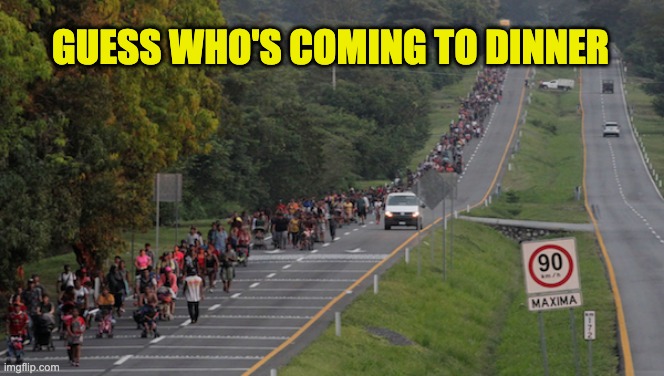 The Biden-Harris administration’s “humane” immigration policy emboldens people to make the perilous journey thousands of miles even when they’re sick.

A new 3,000-member caravan from Central America heading through southern Mexico on their way to sneaking into the U.S.via the southern border. The caravan has been dubbed the “Madre Caravana” or the “Mother Caravan” because it is primarily made up of women and children. They have been having a difficult journey walking in the heat and sleeping in the rain as they travel through southern Mexico.

Reuters reports that the group is still pressing forward to the United States despite the unforgiving elements, physical exhaustion, and rampant illness among their numbers.

A volunteer doctor that is treating the caravan members has said that more than 50% of the migrants are sick, and a handful have been infected with Dengue Fever — a mosquito-borne illness that causes a high fever and flu-like symptoms. Dengue can also progress to Dengue Hemorrhagic Fever which can cause severe bleeding, sudden drop in blood pressure, and even death.

The Mexican government’s National Migration Institute (INM) reported that six people in the caravan — five of whom were children — had contracted Dengue.

But that’s not all. There is an unknown number of SARS-CoV-2 infections among the migrants — and the Corporate Media behaves as though that is the one thing that is certain to kill us all.

A caravan of thousands of migrants and asylum seekers from Central America and the Caribbean resumed its trek through southern Mexico on Monday, despite concerns that half of them could be injured or sick, including some from dengue fever.

Over the past week, the approximately 3,000 migrants, mostly women and children, have trekked over 100 km (60 miles) from the city of Tapachula on the Guatemalan border, struggling through sweltering heat and evening rains.

Kabir Sanchez, a volunteer doctor helping to look after injured caravan members, said he and his colleagues treated dozens of people on Saturday with foot injuries, respiratory problems, infections and pregnant women at risk of miscarrying.

“More than 50% of the people in the caravan are sick,” he told Reuters by telephone.

He said other caravan members had possible cases of coronavirus, but that the government had not provided COVID-19 tests.

While Vice President Cackling Kamala Harris — the “Border Czar” — is looking for root causes in the Northern Triangle countries, migrants are heading to Mexico from other countries.

Luis Villagran, one of the leaders of the caravan that is largely composed by migrants from Africa, the Caribbean, Central America and South America, told Reuters on Sunday that many of the children and women were fatigued from the long distance travel.

‘There are more than 150 boys and girls who can’t walk any more,’ Villagran said. ‘There are pregnant women with sores on their feet who can’t continue walking. We estimate there are 90 women in a critical state.’

Mexican government data published last week showed that detentions of foreign migrants during September leapt to more than 41,000 from around 32,000 a month earlier. That compared with just over 82,000 in all of 2020.

Last week, the leaders of the migrant caravan refused offers of visas from the Mexican government which would allow them to stay, work, and access a variety of services including healthcare.

They said it’s because the Mexican government didn’t honor agreements with migrants in the past and forced migrants to remain in Southern Mexico far from the U.S. border.

They’re clearly holding out for the Biden-Harris’s more “humane” border policies that would allow them to cross into the U.S. with their kids in tow, be transported into the interior of the country without a court date, and there’s the chance of a cool $450,000 each if they happened to be separated by the overwhelmed border agents and the Biden-Harris admin gets its way. How come they don’t look to compensate angel moms and their families?  The American citizens have lost children because of illegal alien crimes,

Let’s face it, either this administration is clueless on how to secure the border, or allowing hundreds of thousands of migrants to enter illegally is intentional. I vote for “b.”

This administration doesn’t even want to secure the border when they claim that the coronavirus is such a severe public health threat that they’re forcing American citizens who have already recovered from the coronavirus to get vaccinated… but people crossing the border illegally with the China Virus? No big deal.

While the anti-American malice that seems to lurk in the hearts of many Democrats is a compelling argument for the Biden-Harris administration’s border failure, let’s not overlook the overwhelming argument of sheer incompetence…

Here’s an idea… maybe don’t incentivize illegal border crossing and it will stop. Perhaps plug up the loophole in the immigration system that is being exploited and actually enforce the laws on the books.

Tell these “economic migrants” who “just want a better life” in the United States that they need to get in line like the rest of the world instead of trying to sneak in like a burglar.

If these migrants keep bringing their kids over on this perilous journey, it’s time to admit that they are unnecessarily putting their kids at risk of illness, injury, trafficking, rape, and death — even more so if they’re sending them alone.

If we just cracked down on that, the flood at the border will slow to a trickle.

But don’t hold your breath on a Democrat administration cracking down on illegal immigration. And despite the Biden-Harris administration calling it a “humane” border policy, it is clearly not humane for the Illegals crossing the border or for the American citizens whose kids are dying from the Fentanyl getting into the country via the southern border.

. Here are just a few examples: