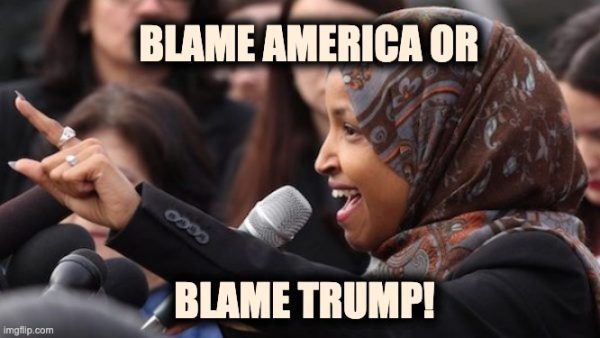 Newly married to a guy she contended she wasn’t having an affair with, anti-Semitic  Rep. Ilhan Omar (D-MN)  is getting a well-deserved slamming for her reaction the family-fun tweet from President Trump’s daughter Ivanka. Ivanka posted a call for families to try and make the best of the time at home together during the social distancing taking place during the coronavirus outbreak. In the post, she suggested having a “living room camp out” with treats and other foods. Which a much better idea than what I am hearing from some parents who are getting so frazzled from being stuck at home with young children and no place to go, they are contemplating suicide by Teletubby. Ihan Omar slammed

Throw a bedsheet over some taped together brooms. Plan a menu & ‘pack’ sandwiches, salads (S’mores optional?)

A fun activity that also brings family together for a meal!

Ivanka also invited her millions of followers to share their ideas using the hashtag #TogetherApart. Personally, I prefer the hashtag #OrderAPizza but her ideas were nice. She followed up with a tweet that said in part, ““It won’t mitigate the fear and pain,” Trump wrote in another tweet, “but it may foster some joy. Let’s come together as a community and share ideas on how to entertain our children (and each other) and create some positive memories in an otherwise frightening moment.”

But Omar used the Trump post to make a political point about President Trump’s policies at the U.S.-Mexico border. “Thinking of all the families separated forcefully by your father’s policies today,” Omar wrote. Then, mocking Trump’s tweet, Omar invited the first daughter to “Share your ideas on how you plan to unite them.”

Thinking of all the families separated forcefully by your father’s policies today.

Share your ideas on how you plan to unite them. #TogetherApart https://t.co/cv2g8Oclvc

The twitter world was not pleased, they tore into her with a well-deserved vengeance:

Thinking of all the families missing their military loved ones today, because the terrorists you sympathize with killed them.

Share your ideas on why you think you shouldn’t be in jail for immigration fraud, campaign fraud, and bigamy. ??

Turn yourself in to immigration authorities, confess your crimes, do your time and get exiled back to Somalia.

I don’t know if she can be deported, David. But she is accused of committing fraud when she helped her former-husband-brother into this country and into college.

Yes. If only they could abuse our immigration policies to sneak their family into the country like you did. Of course, marrying your brother is also illegal here.

You have no shame. She is in her own home with her own children. She did not trespass to your property. You do not know when to put a sock in it. Stop the harassment pic.twitter.com/LFyLwYs9A4

#IlhanOmar, you are a hateful, disrespectful agitator who has no love, loyalty or patriotism for the nation that very generously saved you and gave you refuge from your third world country after your family had to flee due to your father’s war crimes. Show some gratitude.

We have a country to save – there is no time for your hateful and divisive rhetoric. Be better (clearly hopeless). Godspeed. pic.twitter.com/cnAsKDz1If

You get the idea. There is much more where that came from.