Ilhan Omar Claims American Power Based On Racism, And Our History ‘Built On The Oppression Of Black Bodies’ 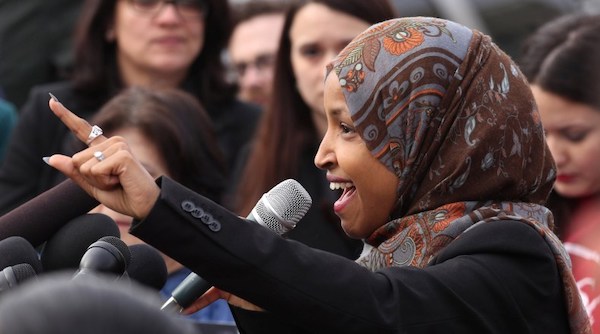 Rep. Ilhan Omar is once again in the hot seat after making some rather critical remarks of America and using those comments to further divide American citizens along racial lines. This has become a pretty typical behavioral pattern for Omar who has become well known for espousing anti-Semitic and anti-American points of view and marrying her brother

Omar recently said that the United States should accept that the country’s power came from racism and that the history of the nation is “built on the oppression of black bodies.”

“From slavery to Jim Crow to redlining to mass incarceration to voter suppression, racism is part of the foundation of American power,” the Minnesota Democrat said Thursday during a panel discussion on Capitol Hill.

“Our task as organizers is not only to all out the specific incidences of racism,” she added. “It is to recognize that our history is built on the oppression of black bodies.”

“In a racist society, it is not enough to be nonracist,” Omar said. “We must be anti-racist.”

You know, the only people who seem to be making race relations bad in this country are folks on the left like Omar who just continue to dig up the past and attempt to bring it into the foreground of what’s happening now. She is a member of Congress and supposed to serve the country by uniting us, but she is doing her best to divide America.

Yes, America had slavery. It was not only awful and despicable but a huge blight on our nation’s history. However, we ended all that pain and suffering. We’ve made massive progress toward treating all people as equal under the law and providing equality of opportunity for all individuals.

Now the words of these folks are tearing all that progress down. And for what? To feel good about themselves? To feel part of some cause or movement? To be relevant to the message being taught to children in government-funded public schools?

Here’s to hoping America can heal from the damage done by folks like Omar.