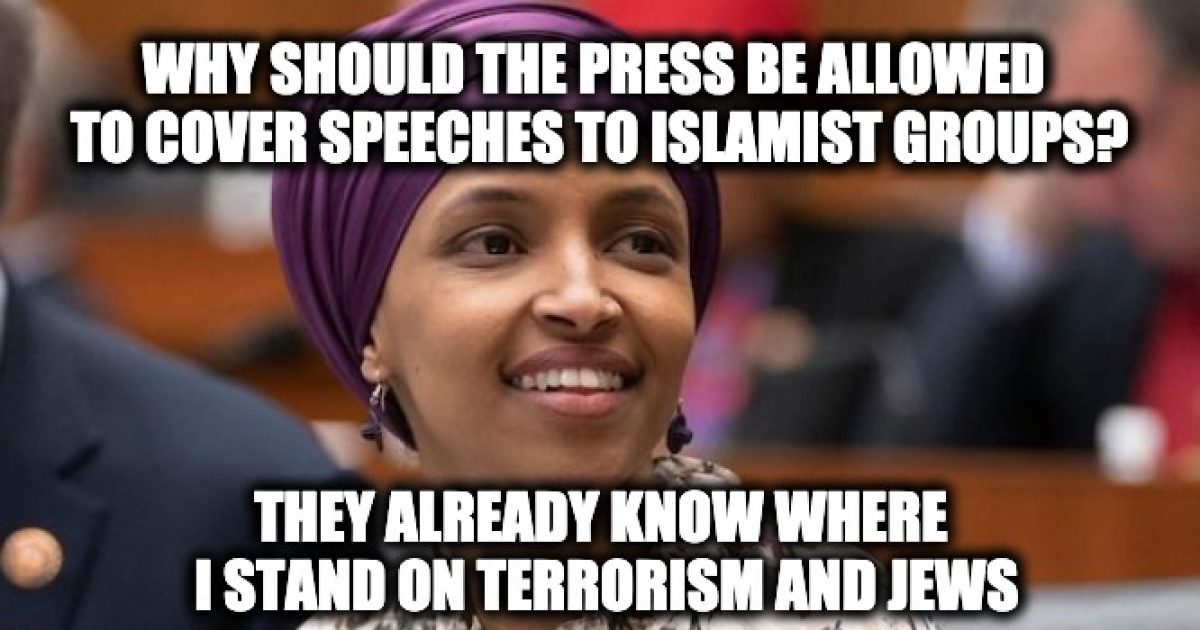 Ilhan Omar (D-MN) who’s been caught making antisemitic, and anti-American statements has been holding secret fundraisers with Islamic groups tied to Hamas. Worse yet, those appearances have been closed to the press and hidden from public view.  Moreover, the content of those speeches, which have been given to predominately Muslim audiences, remains unknown.

The question that naturally comes to mind is, “why?”

Per the Free Beacon

Omar recently spoke in Florida at a private event hosted by Islamic Relief, a charity organization long said to have deep ties to groups that advocate terrorism against Israel. Over the weekend, she will appear at another private event in California that is hosted by CAIR-CA PAC, a political action committee affiliated with the Council on American Islamic Relations, or CAIR a group that was named as an unindicted co-conspirator in a massive terror-funding incident.

Omar’s appearance at these closed-door forums is raising eyebrows in the pro-Israel world due to her repeated and unapologetic public use of anti-Semitic stereotypes accusing Jewish people of controlling foreign policy and politics. With Omar’s popularity skyrocketing on the anti-Israel left, it appears her rhetoric is translating into fundraising prowess.

It remains unclear what Omar has told these audiences in her private talks. Washington Free Beacon attempts to obtain video of past events were unsuccessful, and multiple local news and television outlets in the Tampa, Fla., area, where Omar spoke to Islamic Relief last month, confirmed they were unable to gain access to the closed door event.

“The event was closed to the media. No materials are available,” said an official with Islamic Relief, a group which has come under investigation for ties to Hamas and the Muslim Brotherhood and has been a private event by some countries as a result of those ties. “IRW has many documented links to terror funding particularly Hamas, and the Muslim Brotherhood. It also is managed by prominent Islamist extremists.”

Omar is also set to hold a meet and greet with CAIR-CA PAC in Irvine, Calif., on Sunday, Fredo said.  That event also remains closed to the public and attempts by the media outlet to obtain information about her statements have been unsuccessful.

CAIR was named as a Muslim Brotherhood/Hamas front group by the FBI, and the U.S. Attorney’s Office named the group an unindicted co-conspirator in the Holy Land Foundation federal criminal trial which showcased that the group was not only created by but raised funds for, the terrorist group Hamas. One of the critical pieces of evidence in the Holy Land case was a wiretap recording that put CAIR’s executive director, Nihad Awad, at a Philadelphia meeting of Hamas leaders.  Participants hatched a plot to deceive Americans and disguise payments to Hamas as it launched a campaign of terror attacks. CAIR co-founder Omar Ahmad joined Hamas big shots at the summit.

Of course, Omar has the right to speak with whomever she wishes, but the secretive nature of her meetings have become a source of concern to many, given her history of anti-Semitic statements.

“Of course she’s holding these meetings in secret. That’s just how Democrats roll these days,” an unnamed veteran Republican political operative told the Free Beacon. “They’re for limiting your ability to spend money on the candidates you want to support, and for secretly fundraising from Islamist groups who support them. It really puts their support for campaign finance reform into perspective.”

“I just wonder what is Rep. Omar saying to a group of Islamic supporters that she feels is so secretive that she cannot say it to the American people, as a whole? What is so secretive that it has to be off the record and closed to reporters? Will she say the same things in public to her Jewish voters in Minnesota that she says to her Islamic friends? What does this tell us about her openness, her honesty, and her integrity?”

Oh, she’s honest, she just doesn’t want everyone to hear her honest statements.  I am not sure why she cares, after all, based on what happened last time, we know that Democratic Party leaders do not have the guts to discipline Omar for her hate speech.

In a letter to Democrat House leaders, EMET and other pro-Israel groups demanded Omar’s removal from the powerful House Foreign Affairs Committee, arguing that her rhetoric and secretive meetings should disqualify her from holding a seat on that powerful committee.

“Rep. Omar’s presence as a keynote speaker to raise funds for Islamic Relief USA, whose parent organization and chapters have documented ties to terrorist organizations, demonstrates that she has learned next to nothing over the last few weeks when she was reprimanded by your office and by other Democrats for posting ugly, anti-Semitic attacks on Jews and their organizations,” the letter said.

“In my lifetime, I cannot think of any other politician who presents a bigger threat to the alliance between the U.S. and Israel and to America’s Jews,” activist Joe Diamond told the Jerusalem Post.  “This woman is an ardent anti-Semite, and she doesn’t even try to hide it.”

“Christians should also be alarmed. Ilhan Omar is a huge threat to our national security,” added Laurie Cardoza-Moore, an award-winning advocate of Christian Zionism.

Hundreds of Americans gathered in Times Sq to send @thedemocrats a msg: @Ilhan Must Go! Off the FA Cmte!

If she isn’t removed, & Jewish Reps remain silent their seats won’t be safe in 2020. Silence is complicity & the Dems seem to have placed their bet on the antisemitic horses! pic.twitter.com/KbdarvT3Bs

And her attacks continue.  As recently as Tuesday, the Daily Wire said, Omar referred to many Americans as “ignorant.”

“Speaking about the process that refugees go through, Omar claimed that Republicans were ‘really good at misinformation and sort of really reorganizing facts to sort of paint a picture that really eventually is not rooted in fact,’” she said. “And so it is not that they might not be knowledgeable about this, but they use it as a tool to stir up hate and division. And ignorance really is pervasive in many parts of, of this country.”

We have to wonder, though.  Who, exactly, are the ignorant ones?  Is it those who see what Omar really stands for,  those who put her in office and continue to support her radical agenda or the media who doesn’t push to cover those secret meetings, or even ask her why they are secret.