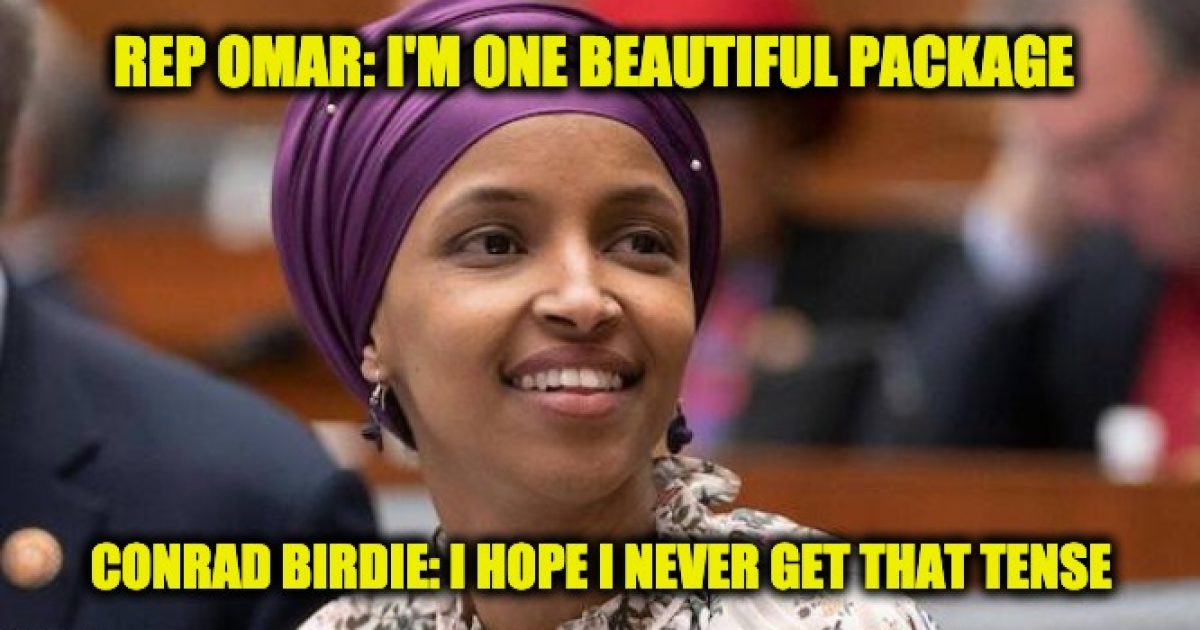 Democrat Ilhan Omar believes the President and his supporters despise her because they’re racists who can’t accept that she’s “one beautiful package.”

One beautiful package? To quote Conrad Birdie from the musical Bye Bye Birdie, “Uh-uh. Man, I hope I never get that tense..”

Omar, borrowing from the narcissist playbook practically perfected by the Obamas, made the comments during an appearance on the late-night comedy show, “Full Frontal with Samantha Bee.”

When asked why she thinks President Trump focuses on her, Omar (D-MN) didn’t mention her consistent ignorance on all things American, her perpetual anti-Semitism, or her supportive views of terror groups. Instead, she believes it’s because Trump doesn’t like women and immigrants.

“For me, I think he is terrified at the fact that I sit on the intersectionality of many identities that he really despises: a woman, an immigrant, Muslim, refugee, and hijabi in one beautiful package,” Omar insisted.

Nah – It has to be because of what she looks like.

She went on to say that she “doesn’t really care that much” about her political opponents because they “are just vilifying and dismissing my voice anyway.”

Ah, but her critics, which range on both sides of the political aisle, are indeed living rent-free in her head. That’s why she’s had to insist time and again that she is far more important a player than she is.

Omar recently shared a message on her Twitter feed alleging she has been President Trump’s “biggest obstacle” since day one. Prior to that, the radical Democrat declared herself an absolute “nightmare” and Trump’s “biggest nemesis.”

Omar also commented on the impeachment inquiry against President Trump.

“A lot of people think we take joy in impeaching this president because we don’t like him,” she lied. “But we take joy in making sure that when we say we’re going to protect the rule of law, that the American people know that we are serious about that.”

She had filed joint tax returns with her husband while still engaged in civil marriage with a man some have asserted is her brother.

The left-leaning Minneapolis Star-Tribune also reported on documents raising questions as to whether Omar married her brother as a means to “skirt immigration laws.”

Now suddenly she thinks she’s ‘protecting the rule of law.’