Mendacity Thy Name Is Ilhan Omar 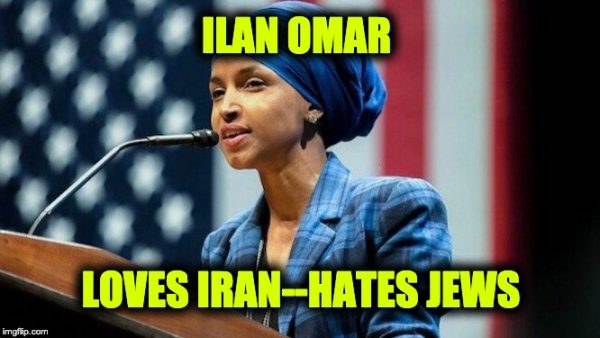 Rep. Ilhan Omar (D-MN) lied in her feeble attempt to explain how she could support the anti-Semitic boycott, divestment, and sanctions movement (BDS)  against Israel while opposing President Trump’s sanctions on Iran. Maybe her constant rotation of husbands and boyfriends makes her dizzy. She supports BDS, and the “S” in BDS stands for sanctions. Perhaps it’s because BDS is an anti-Semitic movement and she is an award-winning Jew Hater.

After the President’s speech on Wednesday, the Minnesota Congresswoman, who was elected Stopantisemitism.org’s anti-Semite of the year for 2019, slammed Trump for promising to add more sanctions on Iran.  She called it economic warfare.

This makes no sense. Sanctions are economic warfare.

They have already caused medical shortages and countless deaths in Iran.

You cannot claim to want deescalation and then announce new sanctions with no clear goal. This is not a measured response! https://t.co/sGWtwXuNDT

Julio Rosas of Town Hall asked Omar why BDS is good, but the Iran sanctions were bad, and she got all tied up in her underwear as she tried to answer.

“The BDS movement is a movement that is driven by the people, the sanctions on Iran, are sanctions that are being placed to create maximum pressure by a government. That’s very different.”

I asked Rep. Omar what her response is to those calling out her support for BDS against Israel while criticizing sanctions against Iran. She said it's "very different" bc BDS is by the people, while Iranian sanctions is by a gov to create maximum pressure.https://t.co/3TVNGFpWy1 pic.twitter.com/e2kC3qfllD

Omar is part of the government is she saying she’s not a person? And the BDS movement is not driven by all people, only people who hate Jews–like Ilhan Omar.

The hypocritical Omar not only personally supports the BDS movement but in July introduced a resolution to get the entire House to support the BDS movement (it failed). BDS is nothing but a front for anti-Semitic hate groups and terrorists that seek nothing less than to delegitimize Israel, to deny the Jewish people their right to self-determination and destruction of the State of Israel, because it is a Jewish State. The BDS movement also promotes hatred toward all Jews globally, radicalizes all the extreme movements, and promotes violence against Jews and other minorities. BDS is simply Antisemitism wearing a mask.

On September 24, 2019, the United Nations, a body with a well-documented history of bias against the Jewish State, released an unprecedented report on the worldwide spread of anti-Semitism. The UN acknowledged that anti-Semitism is growing around the world, wearing one of three faces: on the far left, the far right, and among radical Islamists. In the report, the UN recognizes for the first time that “the objectives, activities, and effects of the BDS movement are fundamentally anti-Semitic. Pope Francis agrees, he said, ”Whoever does not recognize the Jewish People and the State of Israel falls in Antisemitism.”

President Trump sanctioned Iran because it is a country that attacked the US embassy in Beirut, killed Americans, sent missiles toward our troops in Iraq, kidnapped US sailors the day that President Obama was delivering the SOTU address, that wants to go nuclear to use against America or as they call us the Great Satan and many more instances of attacking this country.

The mendacious Omar says the anti-Semitic sanctions are good, but the ones to protect this country against a rogue regime that regularly chants “Death To America” is a bad thing.

Perhaps she is trying to maintain her title: