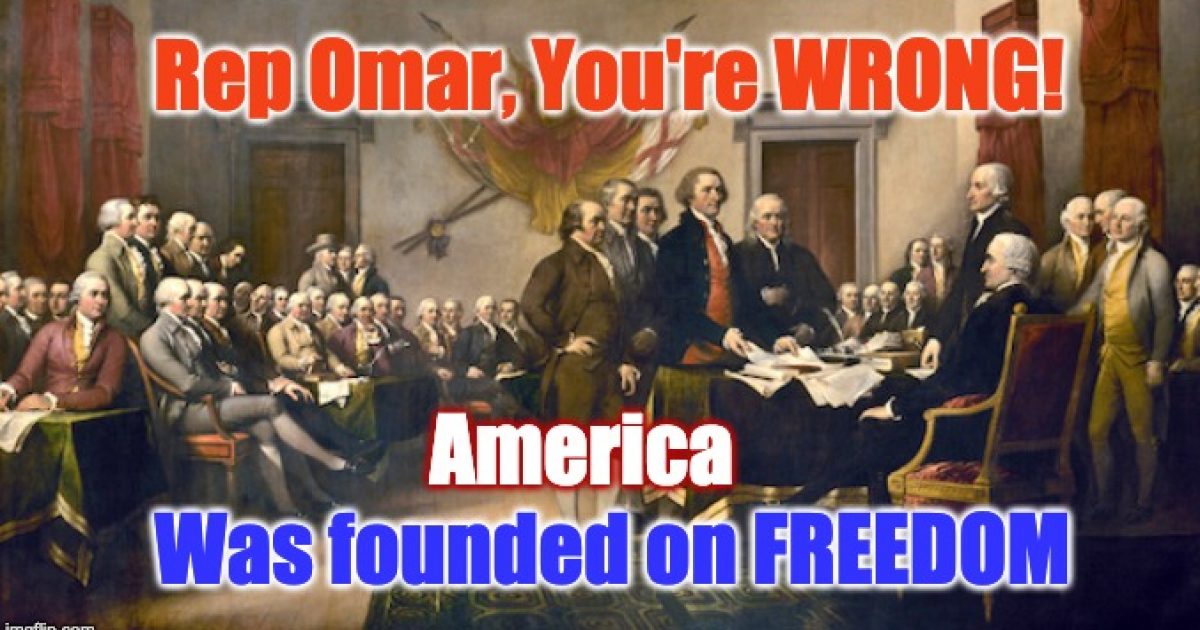 It seems that Democrat Ilhan Omar, the newly-elected anti-Semitic Member of Congress from Minnesota, has hated America for quite a while.  In 2017, for example, she issued a tweet saying the United States was “founded by genocide” and maintains the nation maintains “global power through neocolonialism.”

“We must confront that our nation was founded by genocide and we maintain global power through neocolonialism,” she said.

Genocide? How dare she. Has she ever read the Declaration of Independence? This country’s founding document was based on the notion that all people deserve an equal opportunity, and that our rights were granted by God and no government can take them away from us. When my grandparents were being persecuted in Russia, this country welcomed them in and gave them freedom. When Omar was escaping Kenya this country took her in and gave her freedom. How many countries in the world can someone accuse being born out of genocide without being arrested? It’s time Ilhan Omar appreciate the fact that she lives in a free country whose Pledge of Allegiance promises “liberty and justice for all.”

STFU…nobody asked your screwed up opinion on the United States. We would be better off without you in our country, much less in government. Our bad for having empathy for citizens of effed up countries. You won’t rest until we are as dysfunctional as Somalia

This woman does not love America!

No we don’t. Because it wasn’t and we don’t. Have you ever actually read a book on America or just repeat anti-American things your hate filled friends say?

Omar came to the United States in 1995 after living in a refugee camp in Kenya for four years. If she really thinks America sucks as bad as she says, then one could be excused for asking, “why are you still here?”

Why are you in this country? You clearly hate the United States as much as you hate Jews.

As one person noted:

If I hated my country as much as you seem to hate yours, I would leave.

Indeed, Omar has routinely shown her hatred and disdain for America since being elected to the House of Representatives.  In March, for example, she said that living in Trump’s America was “an everyday assault.”  She also blamed the U.S. for a terrorist attack in Kenya, traveled with an anti-American, pro-Communist organization and wants to defund the entire Department of Homeland Security.

And of course, we can never forget her saying that “some people did something” on September 11, 2001.

That was just some people doing something

FYI..Native Americans were planning and carrying out genocide on other tribes before the arrival of Europeans. It is told in their oral histories.https://t.co/6jwCriA5UN

IIt’s clear to us and many on Twitter that Ilhan Omar is not a fan of the country that gave her freedom in 1995.

IMPORTANT NOTE: Omar’s attitude about the country that took her in is a reason to vote the Democrats out of power, and it a reason for the people in her district to vote her out of office. But it is not an excuse to threaten her, or God Forbid hurt Rep. Omar physically in any way. Anyone who threatens Rep. Omar or acts upon those threats hate this country more than many of us suspect Omar does.