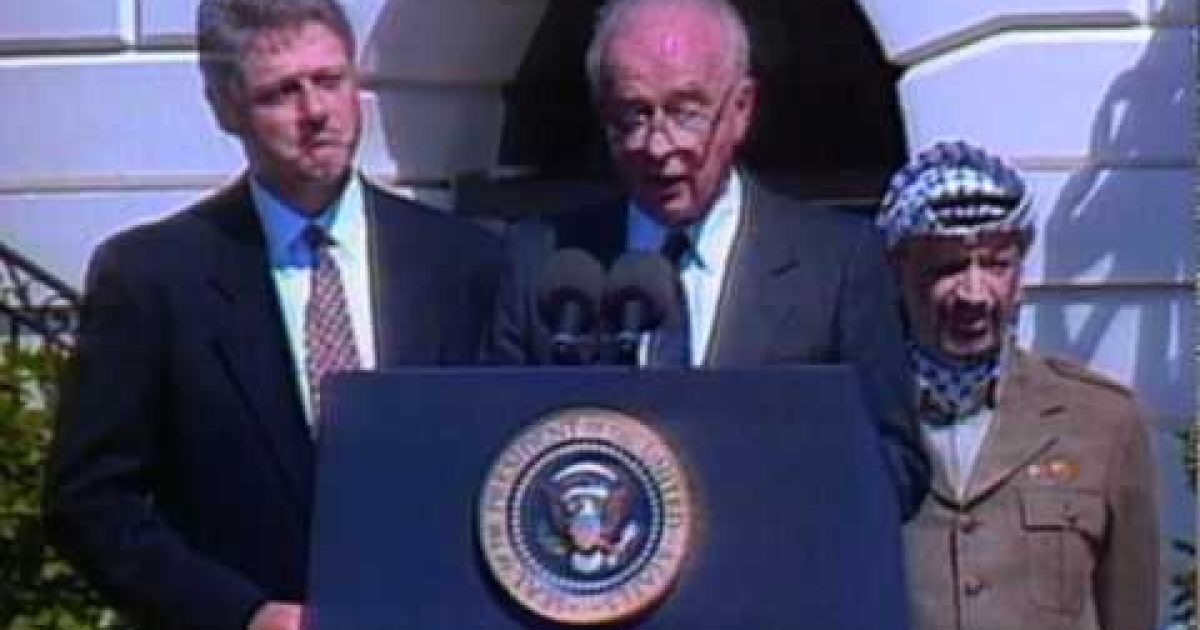 Nineteen years ago, November 4, 1995 Yitzhak Rabin was assassinated by a crazy Israeli zealot. Since his death, the myth of Rabin’s peacemaking expanded to huge proportions. But Rabin’s final vision for peace was to the right of supposedly-“hawkish” Prime Minister Benjamin Netanyahu. Yitzchak Rabin was the last prime minister of Israel who did not support the creation of a Palestinian State.

Even though the process was a failure, some believe that Yitzhak Rabin deserves credit for attempting to make peace via the Oslo Process. But the late Prime Minister was not the blind “peace above everything else” type, as claimed by liberals in the United States and in Israel. Rabin did not support the creation of a Palestinian State, and believed that Jerusalem was the indivisible capital of the Jewish State,

One month before he was assassinated (on Oct. 5,1995), Rabin delivered a speech to the Knesset that laid out his vision for the future of Israel and the disputed territories. It was a vision which would have made the Netanyahu-hating Barack Obama long for his old friend Bibi. The elements laid out in the Rabin speech included:

(The entire speech can be found here)

None of this is meant to denigrate the memory of the late Israeli PM, but it is meant to show the true nature of the media and world leaders. They have taken upon themselves to trasnmute Rabin into something he was not. For many years, Rabin’s legacy was defined by the dreams of the peace process that he was engaged in with the Palestinians at the time of his murder. Whether this was what he would have wanted has been debated by his relatives and confidants, some of whom were aware of his growing doubts about the intentions of Yasser Arafat, who was already sabotaging the diplomatic process by ordering terrorist attacks before, during, and after the time of Rabin’s assassination.

Many people who were close to father told me that on the eve of the murder he considered stopping the Oslo process because of the terror that was running rampant in the streets and that Arafat wasn’t delivering the goods. Father, after all, wasn’t a blind man running forward without thought. I don’t rule out the possibility that he considered also doing a reverse on our side. After all, he was someone for whom the security of the state was sacrosanct.

The Oslo process that Rabin began came to be roundly criticized as it led to deadly violence, including the second Intifada, and at the same time it consolidated the power of the terrorist Arafat. But who can honestly know what would have happened if a crazy zealot didn’t strike Rabin down 19 years ago. Oslo might have been over long before the Intifada and Arafat might have been sent back to his hiding place in Tripoli.

What is known is that the same people who created the revered image of Yitzchak Rabin as a blind peacemaker vilify Benjamin Netanyahu even though Bibi’s positions are more moderate than those of Rabin.