If Only Thomas Friedman Had A Brain 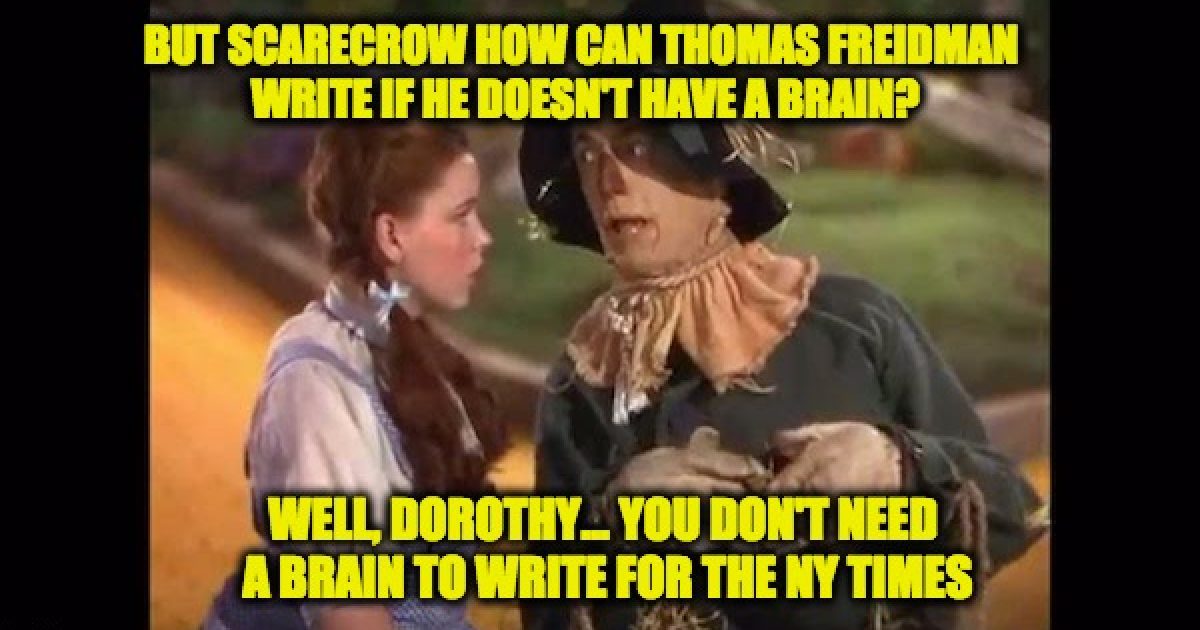 If all of that had happened, no one would be telling us not to dishonor the victims and “politicize” Paddock’s mass murder by talking about preventive remedies.

No, no, no. Then we know what we’d be doing. We’d be scheduling immediate hearings in Congress about the worst domestic terrorism event since 9/11. Then Donald Trump would be tweeting every hour “I told you so,” as he does minutes after every terror attack in Europe, precisely to immediately politicize them. Then there would be immediate calls for a commission of inquiry to see what new laws we need to put in place to make sure this doesn’t happen again. Then we’d be “weighing all options” against the country of origin.

I think that’s the wrong point. What should have been raised if only Thomas Friedman has a brain, he might be posing this instead. “If only Stephen Paddock was a Muslim those who disagree with me would be politicizing the carnage in Las Vegas, but because he wasn’t, I’ll politicize it.”

What happens when the killer was only a disturbed American armed to the teeth with military-style weapons that he bought legally or acquired easily because of us and our crazy lax gun laws?

Then we know what happens: The president and the Republican Party go into overdrive to ensure that nothing happens. Then they insist — unlike with every ISIS-related terror attack — that the event must not be “politicized” by asking anyone, particularly themselves, to look in the mirror and rethink their opposition to common-sense gun laws.

But if only Thomas Friedman had a brain he would look at his face in the mirror and decide to tell the truth. I know it would be a major change for him but what the heck…perhaps it’s time. There is no common sense gun law that would have prevented Stephen Paddock from committing a massacre Sunday.  But if only Stephen Paddock were a Muslim Thomas Friedman would drop his opposition to President Trump’s Travel pause an extra vetting. A program that might have prevented  some of the recent terrorist attack/shootings

If Thomas Friedman had a brain he might realize that if a “bad guy” can’t get a gun by legal means he will get a gun illegally.

But when fighting the N.R.A. — the National Rifle Association, which more than any other group has prevented the imposition of common-sense gun-control laws — victory is not an option, moderation is not on the menu and the president and the G.O.P. have no mad dogs, only pussycats

Really?  If only Thomas Friedman had a brain, he might fight against planned parenthood’s efforts to deny any limits on abortion, or the union efforts to fight any reduction in Obamacare.

Because it’s [the NRA] driven by money and greed — by gun makers and gun-sellers and oil and coal companies, and all the legislators and regulators they’ve bought and paid to keep silent. They know full well most Americans don’t want to take away peoples’ rights to hunt or defend themselves. All we want to take away is the right of someone to amass a military arsenal in their home and hotel room and use it on innocent Americans when some crazy rage wells up inside them. But the N.R.A. has these cowardly legislators in a choke hold.

If only Thomas Friedman had a brain, he would realize that the NRA is driven by its 5 Million members (like me). Not all own a gun but all believe in the Second Amendment.

There is only one solution, show Thomas Friedman as he really is…a brainless lemming pushing leftist conspiracy theories, and trying to disparage anyone with whom he disagrees.  After all, he can’t use facts and logic…he doesn’t need them…he works for the NY Times.