In October of 2008, Hansen made the announcement that it was warmest Oct. in history. A few days later after all the doom and gloom headlines passed he announced “OOPS NEVER MIND, I was wrong.” It was also after he was “outed” by other scientists. Oct. 08 was quite an average October. It Ranked 70th in the last 114 years.

That wasn’t the first time Hansen has screwed up his numbers. In 2007 he was forced by reporter Stephen McIntyre to revise his published figures for US surface temperatures, to show that the hottest year in history was not 1998 as he had claimed, but 1934.

Well It wasn’t exactly a correction. He fought tooth and nail  against changing the numbers, mislead the pres and in the end didn’t fully make the change.  Judicial Watch filed a FOIA request and gained access to all the NASA Documents related to the incorrect data, unlike a real scientist the grand guru of climate change wasn’t very anxious to correct his mistakes. As Judaical Watch reported:

According to multiple press reports, when NASA corrected the error, the new data apparently caused a reshuffling of NASA’s rankings for the hottest years on record in the United States, with 1934 replacing 1998 at the top of the list.

These new documents, obtained by Judicial Watch through the Freedom of Information Act (FOIA), include internal GISS email correspondence as NASA scientists attempted to deal with the media firestorm resulting from the controversy. In one exchange GISS head James Hansen tells a reporter from Bloomberg that NASA had not previously published rankings with 1998 atop the list as the hottest year on record in the 20th century [not true].

Hansen announced recently that “The 12-month running mean global temperature in the Goddard Space Institute analysis has reached a new record in 2010  The main factor is our estimated temperature change for the Arctic region.” The GISS figures show that recent temperatures in the Arctic have been up to four degrees C warmer than the long-term mean. 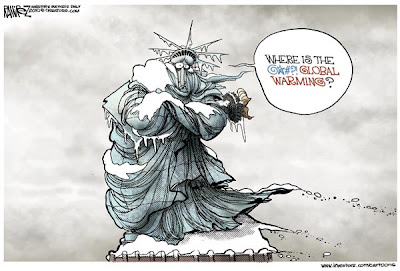 Just like much of his data, the arctic numbers that were so important to Hansen’s Statement were a figment of Hansen’s vivid imagination.  Art Horn, at the Energy Tribune blog, Blew the whistle on Hansen and GISS. He pointed out that GISS has no thermometers in the Arctic! It has hardly any thermometers that are even near the Arctic Circle. GISS estimates its arctic temperatures from land-based thermometers that supposedly each represent the temperatures over 1200 square kilometers.  Turn on the Weather Channel and look at the temperature fluctuations within a 40 mile radius…and they want to use 1200 kilometers.

The climate has been warming slowly since the Little Ice Age, but it has quite a ways to go yet before reaching the temperature levels that persisted for nearly all of the past 10,500 years.

It’s really much to do about nothing.

That’s were I disagree with the  Watts Up With That post, it is much to do about global redistribution of income.