Man Arrested for Rape Let Out of Jail Over Corona, Murders the Woman He Raped, Commits Suicide

If Masks Work, Leave Them In Prison And Give Them Face Masks 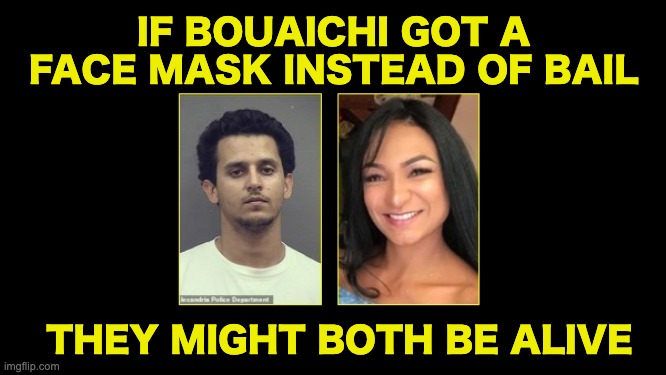 Accused of rape, let out on bail because of COVID-19, and then killing his accuser,  Ibrahim Bouaichi isn’t the only person to commit a criminal act, but he shouldn’t have been released from prison in the first place. The question remains if face masks prevent the spreading of COVID-19 as we are constantly told,  why not give the criminals face masks and keep them locked up? If the judge had given him a face mask instead of bail, Karla Elizabeth Dominguez Gonzalez would still be alive.

Police tracked down and found Ibrahim Bouaichi, 33, in Prince George’s County, Maryland, on Wednesday. Authorities sought Bouaichi in connection with the death of Karla Dominguez, who had accused Bouaichi of rape and testified against him in October, according to The Washington Post.

When police located Bouaichi, he fled in his car until he crashed. Police moving to arrest him found that he had apparently shot himself. Bouaichi remained in critical condition on Thursday.

Partly on Dominguez’s testimony, Bouaichi was indicted on five felony charges of rape, sodomy, strangulation, abduction, and burglary. Bouaichi was held without bail in an Alexandria prison facility until April 9, when Circuit Court Judge Nolan Dawkins ordered his release on a $25,000 bond.

Per the WaPo report, the prosecutor objected to the bail, but the prosecutor, Ibrahim Bouaichi’s attorneys argued that he should be released on the $25K bond with the condition that he only leaves his Maryland residence to meet with lawyers or pretrial services officials.  They argued that in jail, their client could get the needed social distancing or other COVID-19 safety measures–why not give the guy a face mask?

Per the police, on July 29, Bouaichi went to Dominguez’s apartment building and fatally shot her. Police were sent to her apartment after neighbors reported hearing gunshots,  They found Dominguez Gonzalez with gunshot wounds to her upper body.

A week later he was seen in a car by federal marshals and Alexandria police in Prince George’s County.

Ibrahim Bouaichi was believed to be driving a 2013 black Nissan Altima that was reported stolen.

Around 11 a.m. Wednesday [8/5] police saw Bouaichi in a car in Prince George’s County, Maryland, and started a brief car chase, which ended when Bouaichi crashed.

According to police, “officers approaching the vehicle found Bouaichi with a self-inflicted gunshot wound.”

The police took him to the hospital where he died on Saturday.

I am not a doctor nor have I ever played one on TV. But one doesn’t need a medical degree to realize if the judge gave Ibrahim Bouaichi a face masks instead of bail, both his victim Karla Dominguez and he would both probably be alive today.