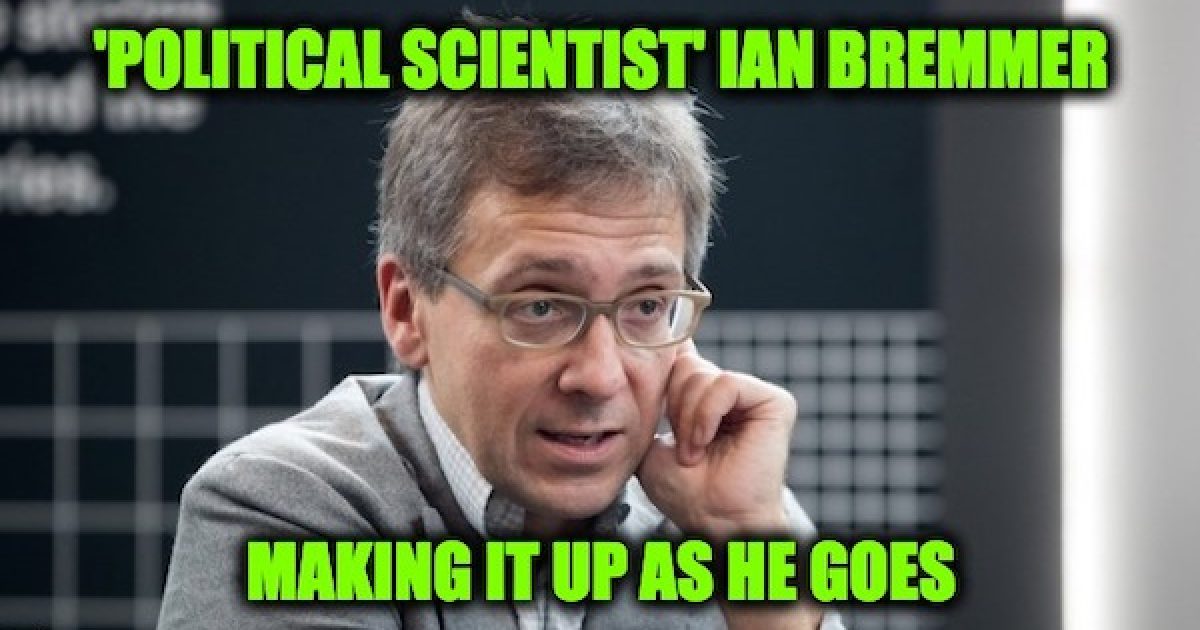 Over the Memorial Day weekend, Ian Bremmer a columnist for Time fabricated a quote about North Korea that he claimed Trump said and despite later admitting that it was fake, the lie-filled quote went viral after being pushed by his liberal pals.

Before we look at his fake news quote, remember that this incident occurred over the same few days that liberals were criticizing people for passing around what they are claiming is a “fake video” of Nancy Pelosi.

So, while liberals are attacking people for pushing a “fake video” of Pelosi, they have no problem at all pushing around a fake quote supposedly uttered by Trump!

There was an earlier Pelosi video not passed around by the President that manipulated and slowed down the video to make the accusation that Pelosi was drunk. That was a fake video. But the video in question featured Pelosi slurring and unable to get two words out isn’t a “fake video,” it is a compilation of all her stammers during one press op edited together as they were made.

So, even as the fake news media continues to call it a “fake video,” it is NOT a fake video.

Typical of the hypocrites on the left, even as they are acting all shocked and bothered by the above not-so fake Pelosi video, they are pushing a phony quote about Trump.

The fake quote was invented by foreign affairs columnist and editor-at-large for Time, political scientist, Prof at NYU, Ian Bremmer.

On Sunday, Bremmer wrote, “President Trump in Tokyo: ‘Kim Jong Un is smarter and would make a better President than Sleepy Joe Biden.’” 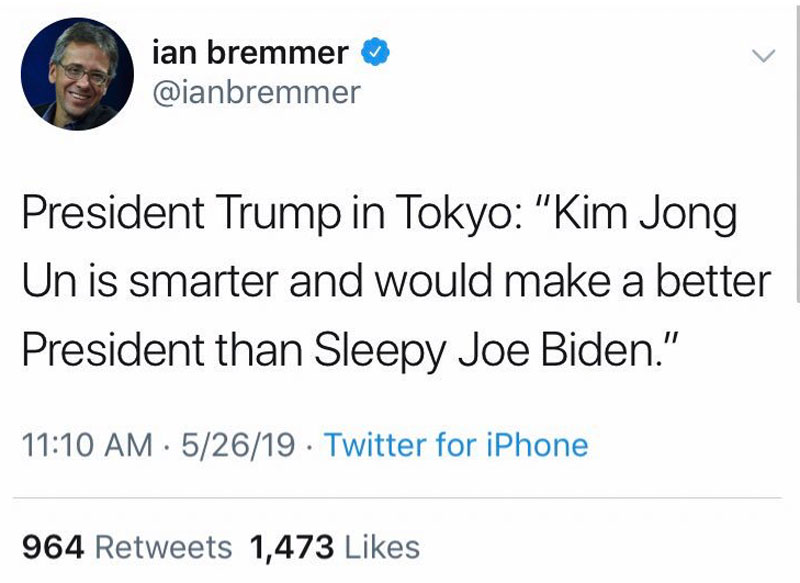 And then people began confronting Bremmer on the quote.

Ultimately, he admitted it was fake, but claimed that he did it on purpose to prove that people will post any quote — whether it is real or not — because it fits their political ideas.

Bremmer later tried to warn that he made up the quote by tweeting that his fake quote was “ludicrous.”

“This is objectively a completely ludicrous quote,” Bremmer later wrote. “And yet kinda plausible. Especially on Twitter, where people automatically support whatever political position they have. That’s the point.”

Amusingly, Bremmer was one of those leftists caterwauling for the removal of that Pelosi video!

Doctored videos are bad for our republic. Doctored quotes are essential for the resistance. pic.twitter.com/0idkcinWvU

.@ianbremmer now admits that he MADE UP “a completely ludicrous quote,” attributing it to me. This is what’s going on in the age of Fake News. People think they can say anything and get away with it. Really, the libel laws should be changed to hold Fake News Media accountable!

Finally, Bremmer apologized after President Trump pointed out his lie:

My tweet yesterday about Trump preferring Kim Jong Un to Biden as President was meant in jest. The President correctly quoted me as saying it was a “completely ludicrous” statement. I should have been clearer. My apologies.

Note: Bremmer lives in NYC but describes himself as a die-hard Boston Red Sox fan. He lives in the United States but I wonder which country is his favorite? Just asking.

At the very least instead of quoting him, even liberals should know that Ian Bremmer is not a fan of President Trump, and anything he reports about the president is probably a lie. I wonder how many liberals thought the below was real.

TRUMP SPOTTED IN MOSCOW: @realdonaldtrump has always said he got no help from #Russia — was he right all along?#PuppetRegime goes to Moscow with him to find out. #muellerreport #trump #hackers @GZEROMedia pic.twitter.com/oQhVVjmixX