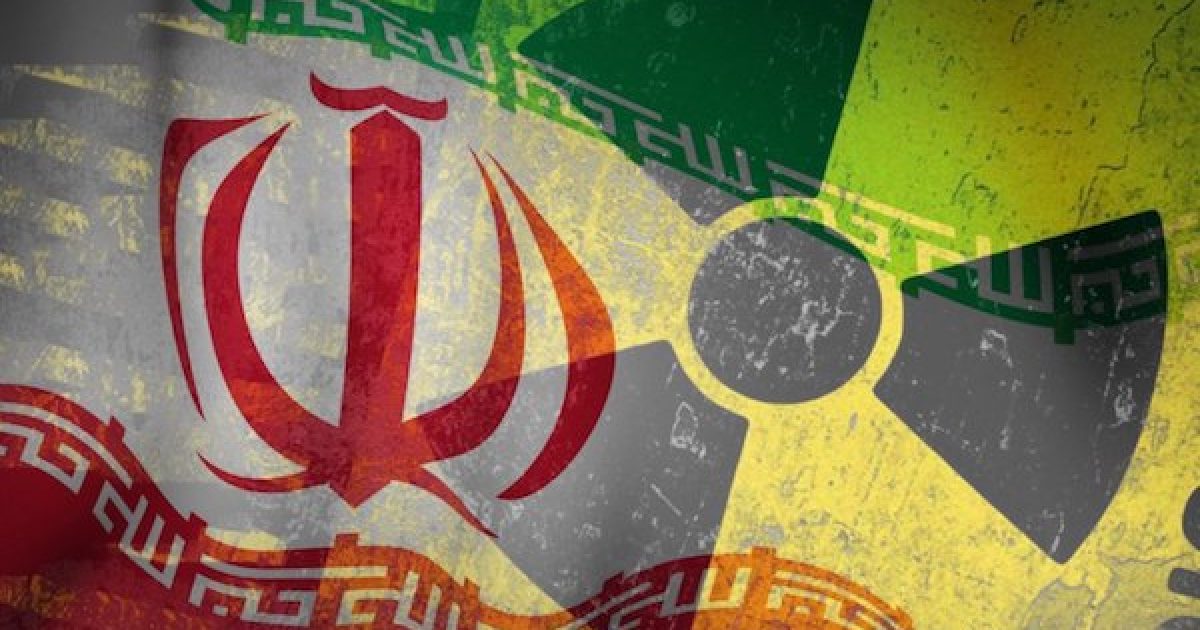 According to a paper published on Tuesday by the Institute for Science and International Security (ISIS),the documents recovered by Israeli intelligence from Iran’s hidden nuclear archive and revealed by premier Netanyahu in April of 2018  show Iran conducted significantly  more high explosive tests at the Parchin nuclear site than previously understood.” This leads to the fact that Iran has already overcome some of the obstacles to building a bomb which experts thought it had not yet mastered.  Based on this new paper we learn Iran was a lot closer to a nuclear weapon than we thought and the work at Parchin may still be going on.

Parchin is a crucial part of Iran’s nuclear program whose operations remained relatively secret despite the JCPOA nuclear deal and assurances made to this country by the previous administration. The International Atomic Energy Agency (IAEA) has long sought access to Parchin which has long been suspected of being the location where Iran was developing it’s detonation systems for nuclear weapons. In October 2014 Iran admitted to using Parchin to test exploding bridge wires used as nuclear detonators, but they claimed the test explosions were not for weapons development.

However, the newly recovered documents prove that Iran was testing detonators for Nuclear weapons at Parchin. They show that Iran had set up labs and pressure rooms at the Parchin base and conducted experiments on the creating explosion chain :

This report, in particular, for the first time publicly correlates photos from inside the main building, called Taleghan 1 by Iran, to satellite imagery, updates previous discussion of the purpose of the second major building at the site, called Taleghan 2, and touches upon the operation of the facilities, including confirmation that Iran was testing in Taleghan 1 a specialized, difficult to develop, neutron initiator to start the chain reaction in a nuclear explosion. The new information about Parchin, aka Taleghan, shows that Iran conducted far more high explosive tests at the site than previously understood. It may have maintained some of the equipment for later use, and did in fact resume (elsewhere) some of those activities related to nuclear weapons development under a new organizational structure controlled by the Iranian military. Most recently, this organization was known by the acronym SPND, mentioned in the December 2015 IAEA report, or by its English name, the Organization of Defensive Innovation and Research.

Furthermore, the IAEA has been ignoring the documentation and data retrieved by Israeli spies presented to the world by  Netanyahu last April. This is although, before its public release, Israel made the IAEA aware of what it found.

The material presented by Israel needs still to be fully vetted by the IAEA with help from experts from IAEA Member States. It is essential to review the information, ask to visit Parchin, and now, to visit the alleged nuclear archive and warehouse sites. The IAEA needs to take additional samples for analysis. If Iran considers this information baseless allegations, this is the best way to remove doubts and ambiguities.

The Institute for Science and International Security includes images reveal that the site had a laboratory, where Iranian scientists developed and tested neutron initiators, which are the part of a nuclear bomb that starts the nuclear reaction inside the bomb-setting it off to become a nuclear explosion, This work continued after the JCPOA was enacted.

A separate document in the archives shows that work continued under “Project 110,” which focused on developing the nuclear warhead in the AMAD program, among other goals. However, to better hide the project, the work was divided into two parts—a covert part with a secret structure and goals, and an overt program centered at universities. Some of the work that was being done at Parchin, in particular, work related to neutron sources used to initiate a nuclear explosion, 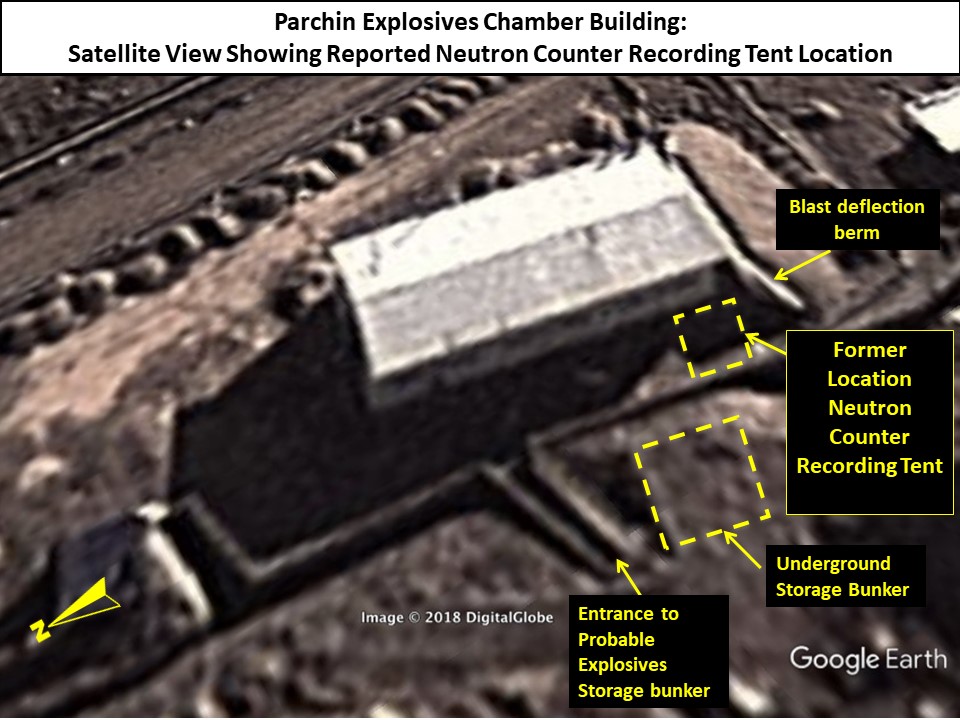 The Institute’s report emphasizes that the building of such an accelerator is particularly difficult and requires great skill and knowledge, testifying to the ability and progress that the Iranians had made

The Obama administration promised lawmakers that IAEA inspectors would be able to inspect Parchin and resolve all possible military dimension (PMD) issues before any final deal was inked. But that didn’t happen; instead, US negotiators allowed Iran to sign a secret side deal with the IAEA permitting the Iranians to self-inspect the facility rather than grant IAEA inspector robust access.

In world politics, very few secrets stay that way. This particular side deal was revealed and published by the AP.  What we learned from the AP report is the Iranians would get to collect their own samples at Parchin, those samples would have to come from mutually agreed upon areas under overlapping photo and video surveillance, and the number of the samples would be limited.

An Iranian statement by Iran after the first “inspection”  confirmed that the Iranians collected their own samples:

An IAEA statement agreed with the Iranians:

“The determination of the spots where the samples are taken is a separate, important, careful activity…. [that] have to satisfy our requirements… the actual swiping or other sample taking [place] under redundant continuous surveillance.”

David Albright, president of the Institute for Science and International Security, explained at a 2015  panel discussion, hosted by the Hudson Institute that self-sampling under surveillance is inadequate. He insisted you need the eyes and the brain to look where to sample. Inspectors need to be on the ground to identify dusty nooks and corners where violators forgot to dust; the mutually agreed upon areas are by definition the ones that violators know have been sanitized.

However, Iran did not provide all the answers requested by the IAEA. In addition, IAEA access, inter alia, at Parchin was limited to one building only, and the IAEA detected some uranium particles in samples taken (where the sampling was actually conducted by Iranian technicians outside of normal IAEA environmental sampling protocols). Subsequent IAEA reports do not indicate that, after December 2015, the IAEA made any additional visits to this military site or associated sites of concern or tried to find reasons for the presence of the uranium found in samples. It is also important to note that the IAEA did not find that Iran’s explanations for the use of the Taleghan 1 building match the IAEA’s findings on the ground. Again, Iran did not address all the questions the IAEA had raised about this site.Moreover, the 2015 IAEA assessment is at odds with information in the archives revealed by Prime Minister Netanyahu, and potentially with new discoveries revealed by the Prime Minister on September 27, 2018 about equipment and material being present in a Tehran warehouse is related to Iran’s nuclear weapons effort. None of the IAEA safeguards and JCPOA-related reports reflects whether the IAEA has, at a minimum, asked for clarifications from Iran about any of these allegations in writing, which is a well-established IAEA practice when such concerns have emerged. For example, the IAEA quickly sent a letter to Iran following allegations by the Iranian opposition group National Council of Resistance of Iran in August 2002 about a secret nuclear site near Natanz, an allegation that turned out to be true. There were also no IAEA statements about the new archive allegations in the official IAEA Board of Governors meetings, two of which were held in June and September, after the Prime Minister’s April announcement.

In September when speaking to the United Nations General Assembly, Netanyahu called out the IAEA for its lack of action since his revelation of the Mossad capture of new information. 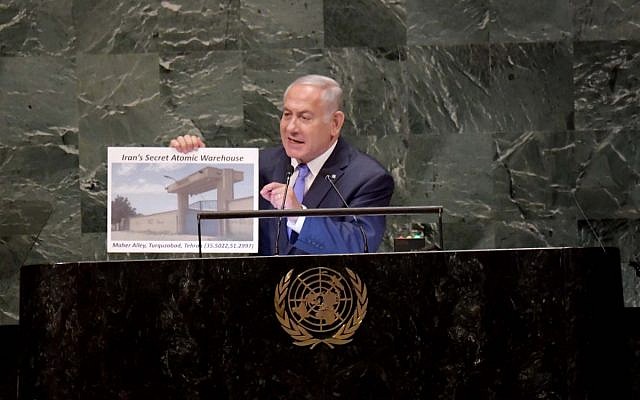 I provided hard evidence of Iran’s plans to build nuclear weapons and its plans to deceive the international community. Israel shared this information and more damning evidence that we found with members of the P5+1 and with the international atomic energy agency. Months have passed, the IAA has still not taken any actions. It has not posed a single question to Iran. It has not demanded to inspect a single new site discovered in that secret archive.

So given this inaction, I decided to reveal today something else that we have shared with the IAA and with a few intelligence agencies. What I’m about to say has not been shared publicly before. Today I’m disclosing for the first time that Iran has another secret facility in Tehran. A secret atomic warehouse for storing massive amounts of equipment and material for Iran’s secret nuclear weapons program.

In May we exposed the site of Iran’s secret atomic archive. It’s right here in the Shuabad District of Tehran. Today I’m revealing the site of a second facility: Iran’s secret atomic warehouse. It’s right here, in the Turkuzahbad District of Tehran. Just three miles away. Let me show you exactly what the secret atomic warehouse looks like. Here it is. You see, like the atomic archive, it’s another innocent-looking compound. Now for those of you at home using Google Earth, this no longer secret atomic warehouse. You have the coordinates, you can try to get there. And for those of you who try to get there: It’s 100 meters from the rug-cleaning operation. By the way, I hear they do a fantastic job of cleaning rugs there. But by now they may be radioactive rags. This is the second secret site. Now countries with satellite capabilities may notice some increased activity on the alley in the days and weeks ahead.

Folks, the IAEA is a joke, as is the JCPOA shoved down our throats by the Obama administration. The part that’s not funny is that the lack of inspections, even with new information in Iran’s own files, may lead to hundreds of thousands of deaths,  Not just in Israel but throughout the Sunni Muslim world, and here in the United States what they call in Iran,  “the great Satan.”
Facebook Twitter Flipboard