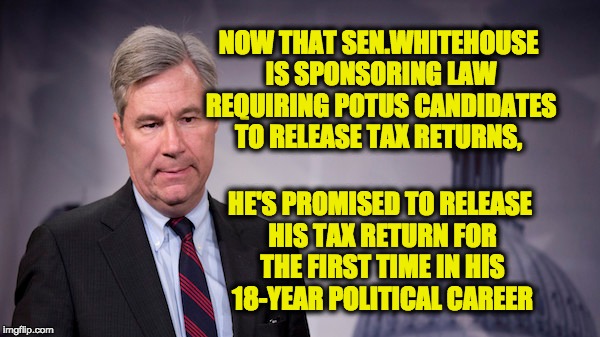 According to Senator Sheldon Whitehouse(D-RI), the 4th Amendment is for everyone but presidential candidates, and releasing tax returns is only for politicians whose last name isn’t Whitehouse. A new law Shelly is co-sponsoring will force all POTUS candidates to release three years of tax returns to the public (Whitehouse never released his returns until he decided to co-sponsor this bill).

Senator Pocahontas Warren (D-MA) introduced the legislation, which would require presidential  and vice presidential  candidates to release their tax returns for the most recent three taxable years. Her colleague Sheldon Whitehouse who wants anyone who conservative groups who disagree with the climate change hypothesis subject to RICO trials, is one of the co-sponsors of this bill. Interestingly he has always said he wouldn’t release his own tax returns. According to his office, he’s wanted to protect the privacy of his children.

It doesn’t really matter if the hypocritical senator doesn’t want to publicize his tax returns–certainly distributing my 1040s isn’t on my bucket list.  It does seem strange that Whitehouse is co-sponsoring legislation, albeit that will only apply to presidents and vice presidents, but will force others to release something that he keeps secret. And Whitehouse is harshly critical of the President for not releasing his returns even though any tax attorney worth his salt would recommend that Trump hold on to all years returns until the audit is done.

However co-sponsoring a bill meant to show America that the last election is invalid, creates publicity.  Now that he’s a co-sponsor of the bill, Whitehouse as agree to release them for the first time. As for me, I still refuse to release my returns.  But then again my wife a CPA, prepares the return and doesn’t even let me see it.

The Providence Journal, quoting a spokeswoman for Whitehouse, said the senator and his wife “have in the past kept their personal tax return private to protect the privacy of their children,” who are now 23 and 27.

“They have requested an extension to file their taxes this year,” spokeswoman Meaghan McCabe told The Journal last week. But “they plan to submit them before the October 15, 2017 deadline…[and then] make the full returns available for review by the media.”

While pledging to release his own tax returns, state Rep. Robert Nardolillo, a potential GOP opponent, said that is not enough: “We want to see all of his returns since taking office in the U.S. Senate. That’s True Transparency.” There was no immediate response from Whitehouse.

Less than 19%? According to Rachel Maddow’s Capone’s safe moment President Trump paid almost 25% on his income it 2005--Hey Shelly you’re a bad, bad, Democrat! You’re not paying your fair share!

I would imagine that the Shelly/Pocahontas bill to compel release of the personal tax return information of presidential candidates would be found unconstitutional by the Courts because of 4th Amendment protects. Not that Whitehouse would care, after all he wants to violate the 1st Amendment free speech rights of people who disagree with the climate change hypothesis.