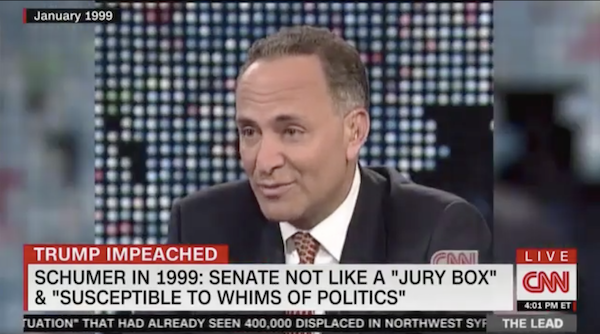 Over the past few days, the Senate Minority leader Chuck Schumer blasted the Majority Leader Sen. Mitch McConnell (R-KY). The reason for the Schumer venom was McConnell’s self-description as  “not an impartial juror” ahead of President Donald Trump’s Senate impeachment trial.  But in 1998 and 99, Schumer preached similar sentiments as McConnell, but Democrat Bubba Clinton was being impeached. CNN’s KFILE gave some examples but there were more cases as reported below. hypocritical Schumer

The Democratic leader who still has no idea how to properly wear glasses ripped McConnell on the Senate Floor:

Let the American people hear it loud and clear, the Republican leader said, proudly, ‘I’m not an impartial juror. I’m not impartial about this at all.’ That is an astonishing admission of partisanship

During his first Senate campaign, one of the promises of the hypocritical Schumer was that he would vote no in Clinton’s impeachment trial. As reported by CNN in October 1998,  “There has been strong White House help for Schumer who says he would vote against any impeachment of the president.”

On October 6th of 1998 under the headline “No Impeach-Chuck” Schumer told the NY Daily News that Clinton’s perjury did not reach the level of impeachment:

With the White House sex scandal complicating his Senate candidacy, Democratic Rep. Charles Schumer yesterday said he believes President Clinton lied to a grand jury and that such actions “cry out” for punishment but not impeachment 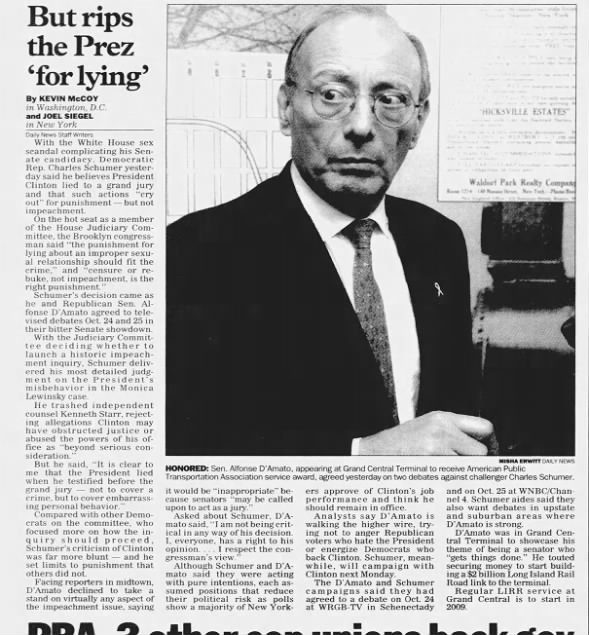 One example was reported by KFILE was featured on this site last week, Schumer said on CNN’s “Larry King Live,” 1/6/1999 that senators had previously formed opinions heading into the trial and that the Senate was “not like a jury box.”

Larry King: “How can you judge a trial in which you have already stated an opinion or have an opinion? You wouldn’t be — you’d be thrown off a jury in any court in America, right?”
Sen.Schumer: “Right.”
Larry King:“Yo u have a pre-opinion.”
Sen.Schumer: “The three of us in the House, two Republicans — Crapo and Bunning — and myself have all decided we would continue to sit here and that’s precisely for the reasons I think that Joe Biden mentioned. This is not a criminal trial, but this is something the founding fathers decided to put in a body that was susceptible to the whims of politics. I felt that to have my state — have half the representation of every other state wouldn’t make sense.”
Larry King: “So therefore anybody taking an oath tomorrow can have a pre-opinion; it’s not a jury box.”
Sen.Schumer: “Many do.”
Larry King: “Many do.”
Sen.Schumer: “And then they change. In fact, it’s also not like a jury box in the sense that people will call us and lobby us. You don’t have jurors called and lobbied and things like that. I mean it’s quite different than a jury. We’re also the judge.”

Schumer was also interviewed about his impeachment vote by the last good host of “Meet The Press” the late great Tim Russert:

The Founding Fathers — whose wisdom just knocks my socks off every day, it really does — set this process up to be in the Senate, not at the Supreme Court, not in some judicial body.”
“Every day, for instance, hundreds of people call us up and lobby us on one side and the other. You can’t do that with a juror,” he added. “The standard is different. It’s supposed to be a little bit judicial and a little bit legislative-political. That’s how it’s been.”

In December 1998, A month after his election to the Senate, Schumer told a press conference, “Well, I hope a trial doesn’t go forward. And I am starting from this moment on to explore every possible way to avoid a trial.”

That same month the Senator-Elect was on NPR’s “All Things Considered” and not only revealed his bias, but accurately predicted the future:

Linda Wertheimer: “Mr. Schumer, you had critical things to say about the president in your own campaign for the Senate in New York. Did you ever at any time consider voting for any of the articles of impeachment?”

Schumer: Never. I had to research this thoroughly, Linda, because I was, as you say, campaigning and had to vote as a member of the Judiciary Committee. I came to two conclusions. I came to the conclusion that the president did lie under oath and should be punished for it. But I came to an equally strong conclusion that the obstruction of justice and abuse of charges, the more serious charges, not that the others aren’t, were flimsy and were politically motivated by Ken Starr. And that any–even if you assumed everything Ken Starr said as fact, it did not rise to the level of impeachment. So I never thought of voting for the articles of impeachment and I do think this is sort of a partisan hijacking. I worry about the future of the country when this can happen. I worry that Democrats will next try to impeach a Republican president.

Who knew that he would be participating in what he worried about.

There you go, it doesn’t make sense to take Senator Schumer seriously. Generally anything he says today, he said the complete opposite when a Democrat was president. When confronted about his hypocrisy by CNN Schumer’s office said:

“These quotes all came after the Starr investigation, which included testimony from key witnesses including President Clinton, had concluded and been made public for months and as Sen. Schumer was in the anomalous position of having already voted on impeachment in both the House Judiciary Committee and on the House floor.”

So is Schumer saying on the Trump impeachment matter the House did a crappy job? More likely, he is just being his usual hypocritical self.