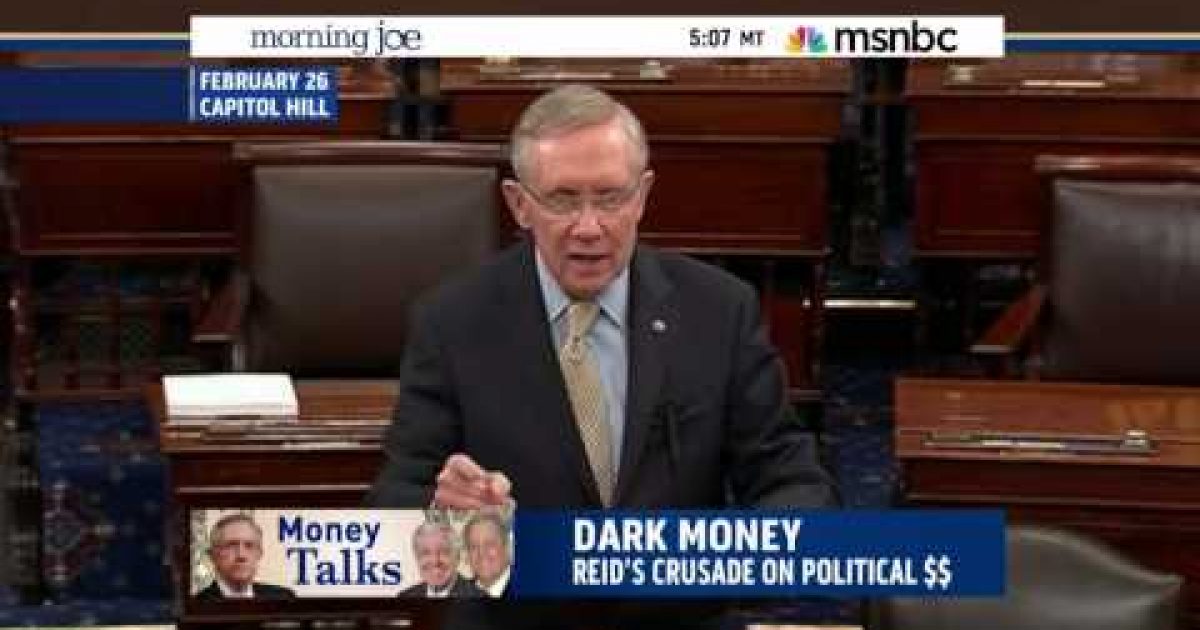 Harry Reid has spent much of the past year slandering the Koch Brothers as un-American because of the campaign donations they make to GOP candidates. On Friday’s Morning Joe, host Scarborough used an NPR report to expose Reid’s hypocrisy as the campaign PAC he controls is the largest spender in the 2014 election cycle. The Koch Brothers don’t make the top five.

An NPR report about the 2014 Senate races raised the issue of campaign spending:

Audie Cornish: We’re going to shift now to politics. For months, Senate Majority Leader Harry Reid has made a sport of bashing billionaires David and Charles Koch for donating millions to tax-exempt groups pushing to win back Republican control of the Senate. But it turns out the biggest spending outside group in this election cycle isn’t the Koch brothers; it’s a super PAC with ties to Senator Reid. NPR’s Peter Overby reports.

Joe Scarborough had a field day with the hypocrisy. First explained the Senate Majority PAC is run by the constant critic of the Koch Brothers campaign spending, Senate Majority Leader Harry Reid (D-NV):

Scarborough: We got new polls that are coming up. Again continue to show a real change in politics, but you know, before we get there. Let’s talk about big money in politics. Because you know all year we had Harry Reid speaking about the evils of big money in politics. Listen we all hate it. It’s bad for politics, and this big money is bad for America. Senator Reid has been attacking the Koch Brothers repeatedly for their sins against democracy and even went so far to call them un-American. Here’s some of his greatest hits.

Harry Reid video clip: Charles and David Koch are shrewd businessmen. What’s un-American is when shadowy billionaires pour unlimited money into our democracy to rig the system. The Koch Brothers are willing to invest billions to buy that America. Senate Republicans, madam president are addicted to Koch. You see when you make billions of dollars a year you can be just as immoral and dishonest as your money will allow you to be. It’s too bad that they are trying to buy America and it’s time that the American people spoke out against this terrible dishonesty of these two brothers who are as about un-American as anyone I can imagine.

Scarborough: It’s sad and pathetic when somebody calls another American un-American especially when they’re bigger offenders of the action that he defines as un-American. Who are the biggest spenders this year? NRA is on the list at number five. Number four you have billionaire liberal Tom Steyer’s PAC, NextGen. Number three is American Crossroads, Karl Rove’s group is number three. The U.S. Chamber of Commerce is number two. But who is number one? Well, it’s not a group bought and paid for by the Koch Brothers it’s actually Harry Reid’s group, the Senate Majority PAC. We can show you a lot of ads that they have been running but it’s been a lot of negative ads all over the country. Reports are from NPR, this all came to our attention from an NPR report. But Harry Reid’s poured $9 million into the North Carolina race alone according to nonpartisan groups. The hypocrisy is absolutely staggering to call the Koch Brothers un-American for doing an act that actually he’s done so much more of this year.

Brzezinski: Reid’s office pushes back saying the brothers have spend more if you look at like Americans for Prosperity and other different—

Scarborough: No. You look at the PACs and, you know, apparently —

Brzezinski: I think the point’s still the same.

Scarborough: Apparently, though as Steve Rattner said the Koch Brothers may have only spent $10 million so far this year. But regardless Harry Reid is number one according to NPR, the number one big spender in the 2014 campaign. So if you want to talk about big money in politics this year, it starts with Harry Reid.

If Rattner’s number’s are accurate, Sen. Reid is spending more than 3x that of the Koch Brothers.