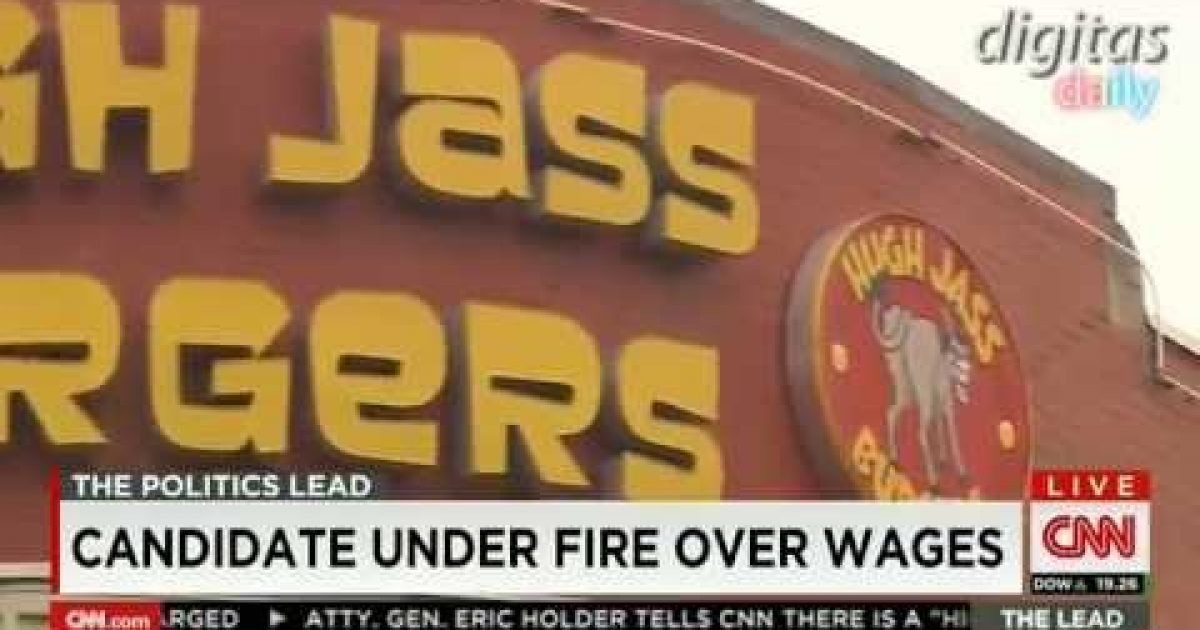 Hugh Jass Burgers say that fast and you will understand the them of the eatery run by Alison Lundergan Grimes’ family. While the Democratic Party Candidate talks about raising the minimum wage and decries the “sexism” of the Republicans, her family’s restaurant pays its waiter/waitress staff $2.13/hour and serves dishes named after Grimes’ mom’s breasts and her sister’s ass.

Frates: In her race to defeat Mitch McConnell, Alison Lundergan Grimes has barnstormed Kentucky, talking up her support for raising the minimum wage.

Grimes: I’m fighting for all Kentuckians, all working Americans across this nation. I don’t believe $7.25 an hour raises a family of four above the poverty level.

Frates: So you might be surprised that grimes’ family business pays some tipped employees only minimum wage. Here in Kentucky, servers at Hugh Jass Burgers (yep you heard that right) making just $2.13 an hour. That’s the minimum wage for tipped employees and it hasn’t budged since the ’90s. The minimum wage for workers who aren’t making tips is $7.25 an hour, a figure that last increased five years ago. So what gives? We went to Kentucky to find out.

Grimes: For me, it’s about making sure that hardworking Kentuckians have a fright future and that future includes having not just a minimum wage but a living wage.

Frates: And the restaurant owned by Grimes’ family, a living wage includes one that depends on tips.

Grimes: My family isn’t in this race. I’m on the ballot.

Frates: What Grimes doesn’t mention is that while she doesn’t own the restaurant, she did do some of its legal work, signing the business incorporation documents and representing the restaurant in a lawsuit. The minimum wage isn’t the only issue where the restaurant doesn’t practice what grimes preaches. On the campaign trail, she’s been an advocate for women’s issues. Her camp even accused Republicans of sexism

Grimes: I am the Kentucky woman who my Republican colleagues refer to as an empty dress.

Frates: But check out what’s on the menu at Hugh Jass Burgers. “Charlotte’s Rack” sure to be named biggest rack, ribs named after her mom. “Abby’s huge ass,” a burger named after her sister. And they sell souvenir items such as this “check out my buns apron.” When we tried to ask Grimes about her family’s use of the phrases, she walked away, leaving us holding the greasy burger bag. With two weeks to go, the race remains tight. But national Democrats have started putting their