Note: There Are No Exposed Body Parts In This Post 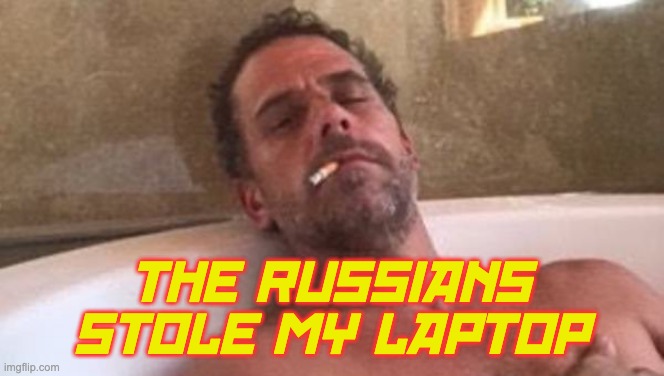 This newly found video shows Hunter telling a naked prostitute that he nearly overdosed on a 2018 bender in Las Vegas and had his laptop stolen by Russian drug dealers. The Hunter in the video is the middle-aged son of #Beijing Biden, the President of the United States.

Boy, oh boy, we’ve come a long way from Dubya’s daughters getting caught trying to order alcohol in a restaurant when they were 19 and in their freshman year at college. But the Bush twins incident caused an MSM feeding frenzy while there hasn’t been much coverage in the Corporate Media of Hunter’s depraved and illegal behavior.

It’s pretty clear that Hunter Biden has trouble hanging onto his laptops. He dropped off one at a Delaware repair shop in April 2019 and abandoned it there. A second laptop belonging to him was seized by the Feds in February 2020 during a DEA raid of psychiatrist Dr. Keith Ablow’s office as part of an investigation into claims that he had been sexually exploiting patients and other professional misconduct (it’s still unclear why the celebrity psychiatrist from Massachusetts had possession of Hunter Biden’s laptop).

This “stolen by the Russians” laptop would be Hunter’s third laptop that went missing. It still appears to be unaccounted for, and at the very least, it proves one should never allow the President’s son to hold their laptop.

In this newly released video from 2019, Hunter tells a naked woman he had just filmed himself having sex with, that in 2018 he was on a bender in Las Vegas. After he nearly overdosed in a hotel room that he realized that his laptop was missing.

He believes that the laptop was taken by the Russian drug dealers he was partying with on an expensive drug, and sex-filled binge he says went on for 18 days “going round from penthouse suite to penthouse suite” and costing up to $10,000 a night. Hunter had handed his credit card to one of those guys and had no idea he was racking up such a massive bill.

Hunter told the woman he had just slept with that a video on the third missing laptop showed him engaging in “crazy f***ing sex.”

Looking at the entire tape, Hunter seems to use the word f**k as often as Al Pacino’s record-breaking use of that particular curse word in the movie “Scarface.” It makes one wonder where he learned to talk like that.

‘I spent f***ing crazy amounts of money,’ Hunter said. ‘I was with these guys. The one guy was, not like you anyway… each night he’d be like ‘there’s going to be so many people here, crazy f***ing party’ and each night it’s nobody.’

Hunter’s claims raise the possibility that he was targeted as a vulnerable conduit to Joe Biden as part of a foreign intelligence operation.

Wait… are they suggesting that Joe Biden’s troubled son who had been kicked out of the Navy because he tested positive for cocaine, left his crack pipe in a rental car, was banging his brother’s widow while exchanging raunchy texts with her sister, lived with a crackhead homeless mother of 7 called “Bicycle,” smoked crack in VIP rooms in strip clubs, knocked up a stripper who was on his firm’s payroll and used the password “Hunter02” on the laptop that had photographs of his ID along with “classic blackmail material” on it might be a target for kompromat [Russian govt. blackmail]?

At one point Hunter details when his laptop went bye-bye during that summer bender in 2018:

“I went out to the hot tub by myself, which hangs over the edge of the f***ing top floor, with glass, it’s ridiculous. And so I’m sitting there and that’s the last I remember. And I don’t ever pass out, ever.”

“I wake up and the only people that are there are Miguel, the guy frantically running round gathering things up, ok – and Miguel, and Pierce, this guy, his friend,” he continued. “They had kicked everybody out. And they had cleaned up the entire place, everything ok?” he said.

“And they were getting ready to leave, and I woke up. And there was this Russian 35-year-old, really nice, pure brunette. She refused to leave and they wouldn’t call an ambulance. And they didn’t know whether I was dead or not, at first.”

‘They checked to see if I was breathing. When I finally showed signs of breath, at first I wasn’t breathing, I was in the fu**ing pool face down, they don’t know how long,” he said.

(,,,) “My computer, I had taken tons of like, just left like that cam on. And he would always put in a passcode and all that, you know what I mean? It was f***ing crazy sh**. And somebody stole it during that period of time. He did all this kind of like pretend search and sh**.”

(…)“I think he’s the one that stole my computer,” he said. “I think the three of them, the three guys that were like a little group. The dealer and his two guys, I took them everywhere. F***ing everywhere, crazy out of your mind sh**.”

The naked woman Hunter was telling about the Vegas bender said if the Russians had it then it would have been leaked already. “No, no, no.” Hunter answered, ” My dad [inaudible] running for president. He is. I talk about it all the time.”

Hunter also admits that he knows it could be used as a Russian government attempt at blackmail, “If they do, he also knows I make like a gazillion dollars.” She asks if he’s worried about being blackmailed. He responded, “Yeah. In some way, yeah.”

Hunter then seemed upset that whoever stole his laptop would be cashing in on the compromising photos and video instead of himself. “I’m worried he gets the money upfront and maybe it doesn’t do a million dollars, maybe it does three. Maybe nobody wants to see me naked,” he said.

Well, Hunter,  everyone I know is on that list of people who would rather not see you naked.

“Maybe it’s ‘news interest’ and because my dad’s a public figure they say ‘we don’t have to pay you anything because you’re of interest in regular news,” he complained.

Do you remember when Rep. Adam Schiff (D-CA) was giddy with the idea that Vladimir Putin had naked pictures of Trump and was using it for leverage, and he got punked by Russian radio show hosts offering to provide copies to him?

That was just a few months before Hunter’s Vegas bender.

This video leaves us with a few questions…

Do the Russians really have Hunter Biden’s missing laptop?

If they do, are they using it as kompromat to get Biden to go easy on Russia?

Was it discussed in that private G7 meeting?

Is this why Biden is allowing the construction of the Nord Stream 2 pipeline which will help Russia while shutting down the Keystone XL pipeline is beneficial to America?