Ken Roth Executive Director of Human Rights Watch is a Jew who’s parents fled the Nazis in 1938.In his official bio he gives that as the reason he has dedicated him self to fighting Human Rights abuses all across the world. What his bio doesn’t say is what has caused him to ignore Human Rights violations against Jews and why he runs an organization which uses falsehoods to slander Israel on an almost daily basis. But I think I know why, (and Don’t worry Kenny boy —you ARE getting your wish)
NGO Monitor’s systematic and detailed analysis shows a significant increase in Human Rights Watch’s focus on Israel in 2006, following a decline in 2005, and returning to the disproportionate agenda and lack of credibility characteristic of the 2000-2004 period. HRW publications dealing with Israel used unreliable and unverifiable “eyewitness” accounts, rather than photographic, documentary, or other evidence. These core deficiencies were particularly evident in its reporting on the July-August conflict with Hezbollah in Lebanon. Similarly, HRW continues to use the language of demonization with respect to Israel, compared to publications on other Middle East countries. The evidence in this report demonstrates that despite HRW’s recognition “that international standards of human rights apply to all people equally,” this powerful NGO continues to promote an anti-Israel political agenda
Report on HRW’s Activities in 2006: Political Bias Undermines Human Rights NGO MonitorJune 26, 2007

This report presents quantitative and qualitative (vocabulary-based) analyses of HRW publications regarding Israel, followed by detailed examples from individual publications issued in 2006. The report applies the methodology used in NGO Monitor’s previous annual reports, based on a weighted scale for the ten different forms of publications produced by HRW. An analysis of HRW’s publications related to the conflict in Colombia and published by a research group at the University of London found similar political biases and lack of credibility. [1] Quantitative Analysis: Focus on Israel Far Exceeds Other Middle East Countries NGO Monitor’s examination of HRW covering the years 2000-04 showed that a very clear and disproportionate level of HRW’s resources were devoted to condemnations of Israel. There was a significant downward trend in 2005. (See report for details.) However, this trend was reversed in 2006, as the organization reverted back to its earlier pattern. While 8 percent of HRW publications and activities on the Middle East during 2005 focused on Israel, (59 of 702 points, as measured by the weighted method) in 2006, this jumped to 20 percent (223 of 1088 points). Indeed, Israel’s score far outweighed that of any other Middle Eastern country including Egypt (81 points), Libya (75 points), Saudi Arabia (47 points), and Syria (38 points). In other words, allegations against Israel received more than 6 times the attention from HRW than did Syria’s dictatorial regime that is being investigated by the UN for involvement in the assassination of Lebanese leaders, including former Prime Minister Rafik Hariri. 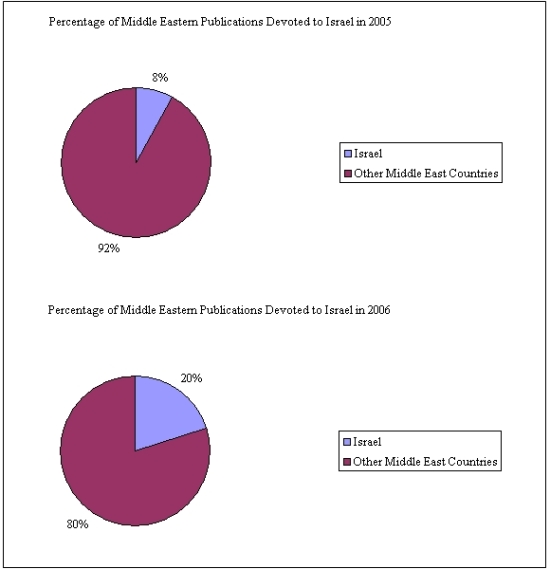 The following graph shows the weighted point totals for all Middle East countries in 2006: 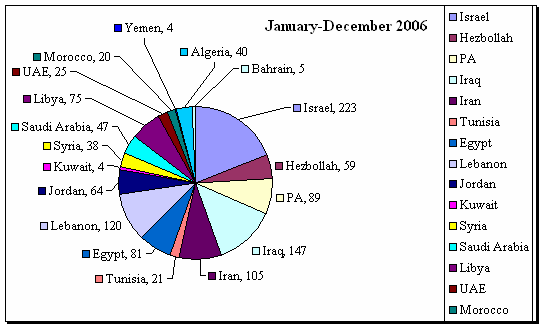 A large percentage of the increase between 2005 and 2006 can be attributed to HRW’s obsessive focus on Israel during the war with Hezbollah, with almost 30 publications issued (close to one per day), including reports, press releases, opeds, and letters. In contrast, if this period is removed from the annual total, HRW’s relative focus on Israel was largely unchanged. In 2005, 8% of HRW publications on the Middle East (based on the weighted methodology) focused on Israel, and in 2006, 10% focused on Israel, excluding the five week war.
From this comparative perspective, HRW’s disproportionate focus on Israel during the war appears to reflect a decision by its officials to use this event as an opportunity to return to their core political agenda, as displayed between 2000 and 2004. Over two-thirds of these publications on the war condemned Israeli responses to the Hezbollah attack, as shown in the following graph:

This extreme over-emphasis is particularly evident when comparing HRW’s publications on Israel with publications regarding the conflict in Iraq.[2] According to the HRW World Report 2007, 1,000 civilians were killed in Lebanon during the Israel-Hezbollah War (July 12-August 14), while 5,000 were killed in Iraq during the months of July and August alone. Nonetheless, the following graph, using the weighted documents methodology, shows that HRW focused almost as much on the month-long war as it did on Iraq during the entire year: Similarly, during this same period (July 12-August 14, 2006), hundreds died in the fighting in Sri Lanka, but HRW issued only two minor press releases, and the ongoing brutality killing thousands in Darfur also received relatively little attention from HRW. 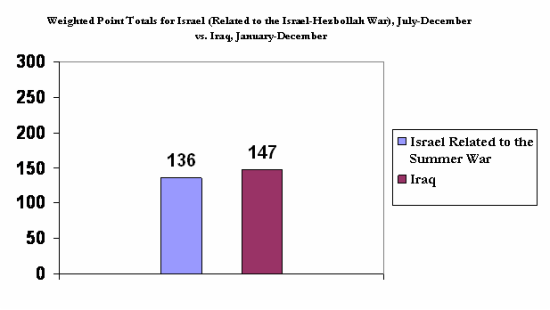 Language as a Reflection of HRW’s Political Agenda In addition to the steady stream of press releases, opeds, statements, letters, and media interviews, HRW reports continued to reflect disproportionality, lack of universality, and inconsistency in reporting on Israel. For example, HRW’s one major report on the Lebanon War was a 49-page document with the highly politicized and subjective headline, “Fatal Strikes: Israel’s Indiscriminate Attacks Against Civilians in Lebanon”. As reflected by this title, the report overwhelmingly highlights the condemnations of Israel, with only minor references to Hezbollah’s violations of human rights, and no statements regarding aggression. As in many similar HRW reports in the past, (such as the organization’s October 18, 2004 politicized report, “Razing Rafah: Mass Home Demolitions in the Gaza Strip” this report also erases the context, including Hezbollah’s aggression and its extensive use of human shields. Peter Bouckaert, HRW’s “emergencies director”, played a major role in HRW reporting on the war, and its institutional biases. On July 31, in The Guardian (UK), Bouckaert called Israel’s claim that Hezbollah used human shields a “convenient excuse.” Similarly, Ken Roth, HRW’s Executive Director, wrote in the New York Sun on July 31, 2006 that Israel’s actions in Lebanon during 2006 were “the morality of some more primitive moment.” (Roth’s offensive reference to the Biblical phrase “an eye for an eye” also demonstrated an immense ignorance.) These specific examples are further evidence of the violation of universality in the language used by HRW with respect to claims regarding human rights in the case of Israel, as demonstrated in previous NGO Monitor analyses. In 2006, HRW publications also disproportionately and inconsistently applied international legal and human rights terminology. The terms “violation of international humanitarian law” and “violation of international human rights law” were utilized 30 times in its reporting on Israel, while only 19 such phrases were found in the case of Iraq. HRW officials also used “grave/serious Human Rights violations/abuses” 21 times regarding Israel, and 28 allegations that Israeli had acted “illegally” or “violated the law.” These terms were used far less frequently by HRW with respect to Iran, Syria, Libya, Iraq and Saudi Arabia, despite routine and systematic human rights abuses practiced by these regimes. The following chart displays the number of times HRW cited each country with different terms in international law and IHL: 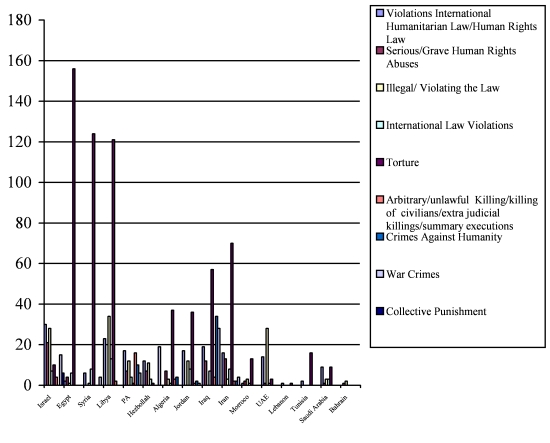 However, in other ways, HRW’s use of language reflects a somewhat more measured and judicious approach. For example, in 2005, HRW limited its use of “war crimes” exclusively to Israel, but in 2006, the term was used with respect seven countries in the region: Israel (15), Iraq (28), Iran (4), Jordan (1), Syria (4), PA(6), and Hezbollah (19[3]). Nevertheless, when all the evidence of distorted language in HRW reports for 2006 is taken into account, the double standards and demonization of Israel are clear. In addition to the examples cited above, we note that: 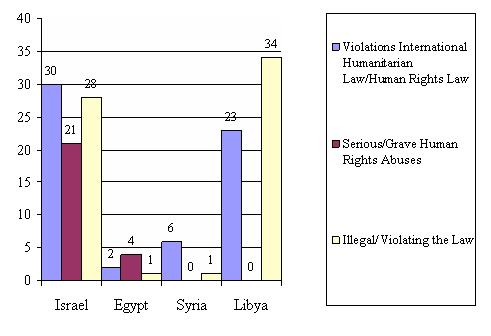 1. See the report published by Andres Ballesteros, Jorge Restrepo, Michael Spagat and Juan Vargas of the University of London and the Conflict Analysis Resource Center (CERAC), a Bogota-based research center. In their report, “The Work of Amnesty International and Human Rights Watch: Evidence from Colombia”, the authors state that Human Rights Watch’s reports have a “non-systematic approach that includes opaque sourcing and frequent changes in the objects they measure” Moreover, they document that HRW “seldom define[s] the categories [it] report[s] on” and publishes on “only a few variables while others come and go from year to year . . . [which] complicates any effort to grasp changes over time in the HR environment.” The report also documents HRW’s tendency to “underestimate guerrilla killings.”
2. Note that only statements regarding insurgents, rather than the policies of the United States or other countries with forces in Iraq, were included in NGO Monitor statistics and analysis on Iraq.
3. It is important to note that while HRW cited Israel 15 times for “war crimes” and Hezbollah 19 times, the impact of these condemnations of Israel was greater than the impact of its condemnations of Hezbollah. For example, 4 of the 19 citations of Hezbollah were in “Fatal Strikes: Israel’s Indiscriminate Attacks against Civilians in Lebanon”, the only major report published during the war. As the title shows, the report focuses almost entirely on allegations against Israel. Such condemnations against Hezbollah are therefore buried, minimizing their impact. In many other cases as well, condemnations of Israel were often more widely publicized than condemnations of Hezbollah or the PA. See this report’s sections on the 2006 Lebanon War and the Gaza Beach Incident for more detail.
4. HRW exhibited a similar failure to acknowledge mistakes in its reporting on the bombing in Qana. On July 30, immediately following the attack, HRW issued a press release declaring that “at least 54 civilians have been killed.” On August 2, 2006, HRW revealed that its “preliminary” research yielded a casualty count of 28 – there are still conflicting reports on the details – yet nonetheless, the organization has failed to remove the original statement from its website. See Marvin Kalb of The John F. Kennedy School of Government-Harvard University’s study, “The Israel-Hezbollah War of 2006: The Media as a weapon of Asymmetrical Conflict” for more information on HRW’s premature casualty estimates regarding the bombing at Qana.
Now What Kenny-boy has been waiting for:

I would like to make a special announcement the one Ken Roth has been working so hard towards…for almost 15 years of demonizing Israel. Ken Roth, son of the Shoah—> you are receiving a lifetime achievement award from the Self-Hating Jew Hall of fame. Yes because of your tireless service to creating more Dead Jews–you are recieving the coveted Shit Head award…. we have mocked up a picture of how it will look when you wear it— congratulations and wear it in good health, you certainly are a fine example of what a shit head should be.