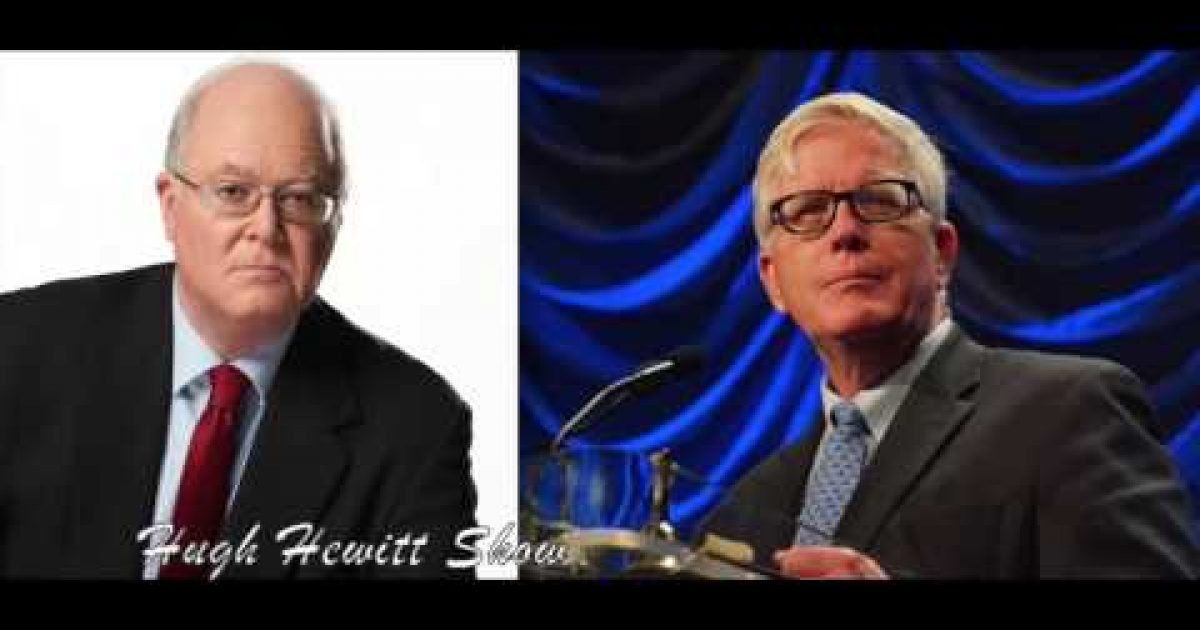 For the listener it was great radio, but for observant Catholic Hugh Hewitt who interviewed president of the Catholic League Bill Donohue in the second hour of the Hugh Hewitt Show, it was a fight for the reputation of his faith. Donohue wrote a post which accused the Charlie Hebdo victims of bringing on the terrorism which killed them. Hewitt called it “morally repugnant, embarrassing, it’s a scandal on the Church.”

Even the most contentious Hewitt interviews usually begin on a friendly basis, but the host was out for blood from the beginning:

Hewitt: As an Orthodox Catholic, I am appalled, and I am embarrassed, and I urge you rethink this.

Donohue: Where did I go wrong, Hugh?

Hewitt: You blamed the victim before their bodies were cold.

Donohue: I didn’t blame the victim at all; that’s not exactly what I said.

Hewitt: Actually I quoted you: “It is too bad that Stephane Charbonnier didn’t understand the role he played in his tragic death…Had he not been so narcissistic, he may still be alive.”

Donohue: Why didn’t you read what I said in front of that?

Hewitt: I read it already, that’s—

Donohue: You didn’t, I have it in front of me. Let me tell you what I said, not your interpretation or the interpretation of the New York Post. “In 2012, when asked why he insults Muslims, he said, ‘Muhammad isn’t sacred to me.’”

Hewitt: Actually that’s not what you said, you wrote first, “It is too bad that he didn’t understand the role he played in his tragic death.”That’s blaming the victim, Bill.​ […] I think everybody understands one thing, at least everybody listening to this show believes you are blaming the victim before their bodies are cold. It’s deeply embarrassing to me as a Catholic.

Donohue:You should see all the Cardinals and Archbishops that agree with me.

Hewitt: Can I finish for a second? Just stop for a second. I don’t believe any Cardinals or Archbishop in the United States has stood up and said I agree with Bill Donahue.

Donohue: They’re calling me up and–

Donohue: Okay, that’s good. In other words, you can’t deal with me intellectually, can you?

Hewitt: Oh, I am so ready to deal with you intellectually.

Donohue: No, you can’t, because you resort to name-calling.

Hewitt: I’ll believe when you can name one Archbishop or Cardinal who called you up.

Hewitt: Will you name one?

Hewitt: Will you name one who has called you up and has stood by you?

Hewitt: You just made an assertion that people are calling you up. I’ve been doing this longer than you, Bill. You get an occasional microphone, you’re not going to bully me. Name one Archbishop or Cardinal who called you up and said I stand with your statement, which is morally repugnant, embarrassing, it’s a scandal on the Church.

That was just the first five minutes of a 24-minute must-listen radio argument which got very personal at least on the part of Donohue, who kept asserting that Hewitt knew very little about Catholicism and the Constitution (Hewitt is a constitutional law professor as well as a radio host, a fact that based on his interview Donohue didn’t realize).

Hewitt kept pressing for the name of someone who agreed with his statement and finally Donohue offered up Raymond Arroyo, lead news anchor for Eternal Word Television Network, a Catholic broadcast network. TruthRevolt spoke to Duane Patterson, Hewitt’s producer who said he emailed Arroyo for confirmation and will let us know when there is a response.

After he conducted the interview, Hewitt posted this statement on his website:

Bill Donohue wrote a horrible thing yesterday; “Muslims Are Right To Be Angry.” I have just concluded an interview that I conducted with him on that statement. It was heated. He is an embarrassment to the Roman Catholic Church on this issue, and should not be understood by anyone to represent the Church on this issue. I doubt very much he will find even one bishop, archbishop or cardinal to stand alongside him in seconding his statement of yesterday. He cited Raymond Arroyo as being in support of his statement, and I do not believe that, and I will seek Mr. Arroyo for confirmation or denial of Mr. Donohue’s statement. But I believe the vast majority of Catholics would be appalled by Mr. Donohue’s statement.