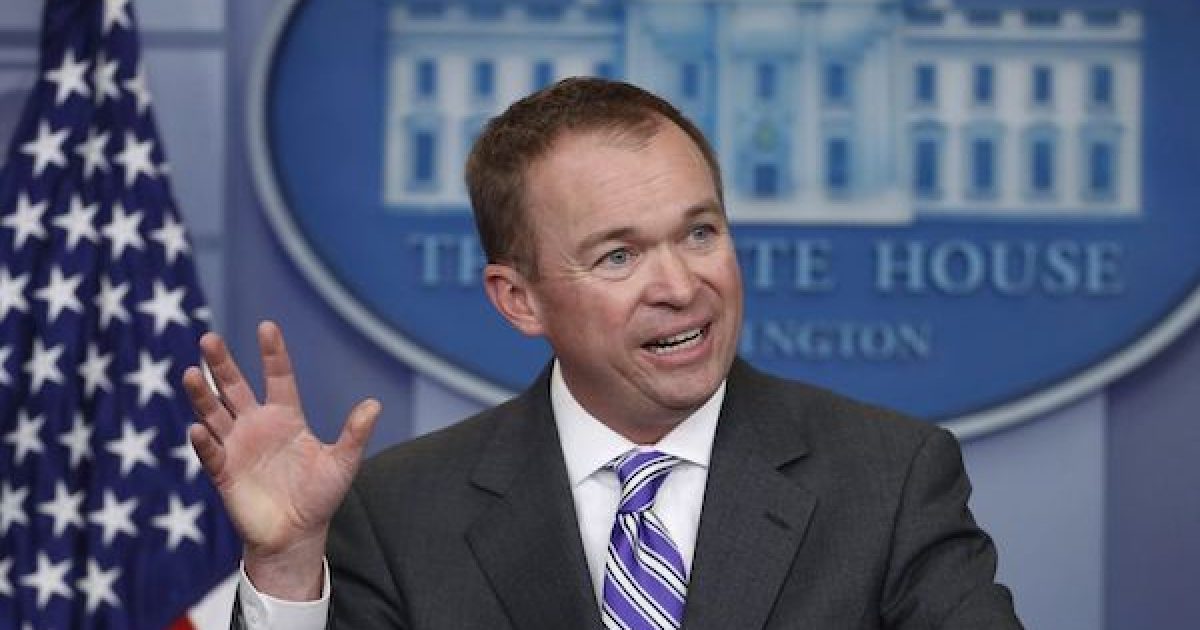 It is so strange that the same liberals who were silent about anti-Semitism during the eight years of Obama, the most anti-Semitic administration in my lifetime, will come up with any lame example in an attempt to label the Trump administration as hating Jews. The latest sick try involved the Huffington Post, which has a history of anti-Semitism, calling the use of the word “globalist” by Mick Mulvaney in reference to parting economic advisor Gary Cohn, an anti-Semitic code word.

It was very obvious that Mick Mulvaney, Trump’s director of the Office of Management and Budget (OMB) used the term globalist as the opposite of Donald Trump’s “America First” policies. Heck I have used it in that context, but of course, the liberal Trump haters dug up a rare anti-Semitic use to trash the administration.

According to the Huffington Post writers Nina Golgowski and Luke O’Brien who at times quoted Jacob Sugarman of Alternet who first came up with the Mick Mulvaney lie:

The term “globalist” was used to describe an outgoing Trump administration official during Wednesday’s White House press briefing, raising eyebrows on social media because the term is increasingly used in xenophobic and anti-Semitic contexts.

The word came up when a reporter asked press secretary Sarah Huckabee Sanders whether a similar candidate will take the place of the outgoing director of President Donald Trump’s National Economic Council, Gary Cohn, who is Jewish.

“He was a noted free trader, a globalist. Will the president seek another globalist, another free trader?” Fox News reporter John Roberts asked. [Note John Roberts works for FNC, so the Huffington Post was trying tto kill two birds with one slander].

Its use also came one day after Mick Mulvaney, director of the White House Office of Management and Budget, used the word “globalist,” in quotations, to describe Cohn in a statement that was posted by his department on Twitter.

According to these fakakta meshuggenehs using globalist in quotations is an anti-Semitic buzz word. What putzes! (since they are such Jewish experts let them figure out the Yiddish but it’s not nice).

There are too many anti-Semitic code words in today’s vernacular, and as someone who includes Jewish issues as part of his blog content I have been called them all. The most common ones are “neo-con” “international bankers” “rich people from metropolitan areas” or cosmopolitan areas (this was an Obama favorite). It was vice.com who decided the terms “Global Special Interests,” or “globalist’ was an anti-Semitic buzz word. But as someone who had been called almost every anti-Semitic term in the book, the haters missed slamming me with the globalist charge.

It’s ironic that Huffington Post, whose editorials are anti-Semitic on a regular basis, would dream of labeling anyone else as a Jew hater.

One of its columnists, M.J. Rosenberg, is so anti-Semitic he was thrown out of Media Matters. Rosenberg is famous for using anti-Semitic buzzwords portraying both Israel and American Jews as war-mongers and claiming that Jews control the media and government. Rosenberg’s most famous line was claiming that anyone who supports Israel was an “Israel-firster” more loyal to Israel than the United States. He eventually dropped the term but kept the fake charge.

If Huffington Post is so concerned about anti-Semitism why would they invite M.J. Rosenberg to infect their pages?

In 2014 the Huffington Post published a “list post” called “The 7 Most Exclusive Secret Societies in History.” The post pointed to six secret societies that actually existed. However, the seventh, “the Elders of Zion,” never existed anywhere except in the bigoted minds of anti-Semites. The author of the piece eventually explained that the Elders are fictional, However, the fictional label follows a description of existing secret societies, providing a false context for the faux organization which the quick disclaimer does not adequately address.

There used to be a site called Huff-Watch. Until 2015 the site alerted its readers of the hatred oozing out of the Huffington Post, some of which was hatred against Jews. Below are ten examples of Huffington Post’s Antisemitism from Huff-Watch’s archives. There is much more where these came from.

Here’s the bottom line–whether or not “globalist” is an anti-Semitic code word really doesn’t matter because I guarantee that the only people who connected it to Jews were the two Huffington Post writers, the writer from Alternet, Israel’s far-left newspaper Haaretz and the liberals who made the connection via Twitter as a way to trash the Trump administration.

Mulvaney does not have a record as an anti-Semite and didn’t use globalist in an anti-Semitic manner. Plus during his congressional career, he was known as a supporter of Israel.

On the other hand, the Huffington Post has always been loaded with Jew-hatred, and never attacked liberals who are actually anti-Semitic like Barack Obama, Al Sharpton, or much of the CBC.  Perhaps the Huffington Post should worry about their own house before they make false charges against others.

To put it in a way these supposed Jewish mavens that work at the Huffington Post might understand, Hey Zhlubs, next time you have the chutzpah to tell a bubbehmyseh about the administration, luzzem!  Instead, gay cocken ofn yahm!