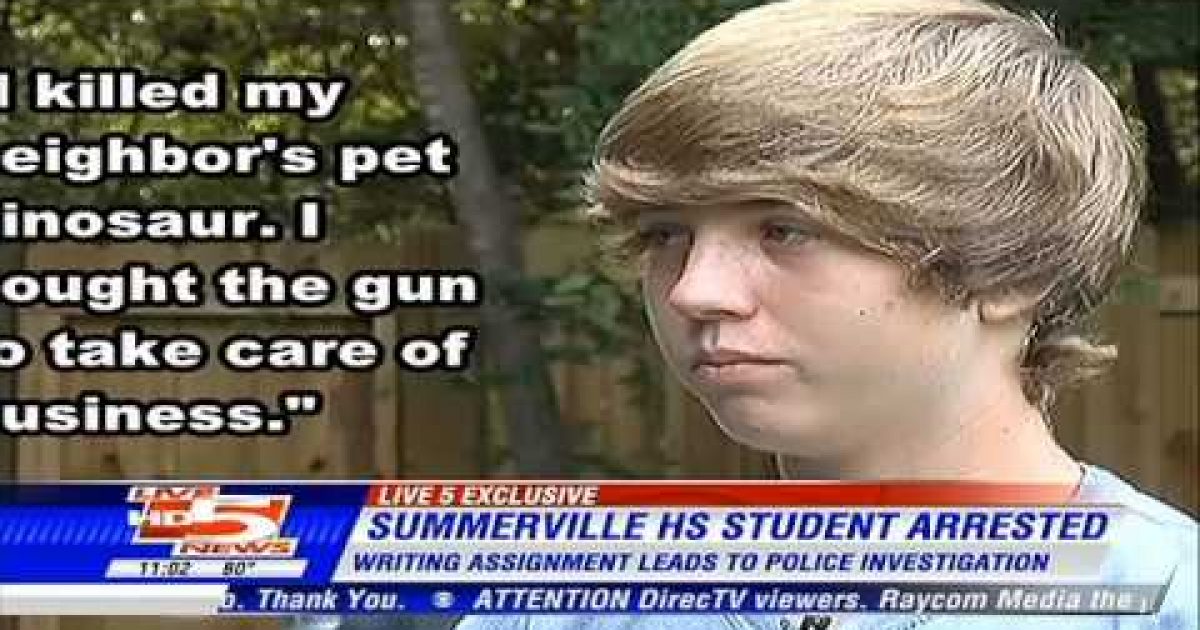 Sixteen-year-old Alex Stone was arrested and suspended Tuesday morning because he completed a school assignment by writing about killing a dinosaur using a gun.

The Summerville (SC) High School student and his classmates were told in class to write a few sentences about themselves, and a “status” as if it were a Facebook page. For Stone’s “status,” he wrote a fictional story that involved the words “gun” and “take care of business.”

“I killed my neighbor’s pet dinosaur, and, then, in the next status I said I bought the gun to take care of the business,” the boy said.

According to a report by WCSC, television investigators say the teacher contacted school officials after seeing the message containing the words “gun” and “take care of business,” and police were then notified on Tuesday. Summerville police officials say Stone’s bookbag and locker were searched on Tuesday, and a gun was not found.

Stone was suspended for the rest of the week. His mother Karen Gray says she is furious that the school did not contact her before her son was arrested.

She says her son followed directions and completed an assignment.

“If the school would have called me and told me about the paper and asked me to come down and discussed everything and, at least, get his point-of-view on the way he meant it. I never heard from the school, never. They never called me,” said Gray.

Stone and his mother say they understand the sensitive nature of what he wrote, but they say it was a rash reaction to an innocent situation.

“I regret it because they put it on my record, but I don’t see the harm in it,” Stone said.”I think there might have been a better way of putting it, but I think me writing like that, it shouldn’t matter unless I put it out towards a person.”

According to police, when Stone was asked by school officials about the comment written on the assignment, he said it was a joke.

Summerville police officials say Stone was disruptive and was told that he was being detained for disturbing schools.

Stone was arrested and charged with disorderly conduct. District officials say the student has been suspended.

It would be safe to assume that with Stone’s arrest and suspension, both Barney the Dinosaur and Godzilla are out of danger.