How Israel Will Survive the NEXT 60 Years

Perception vs. Reality, in three words that is Israels PR problem in the Western World. In the past three years, the UN has condemned Israel over 600 times. That is more than 10 times that of North Korea. And that perception goes WAY beyond the UN. Israel has become the enemy of all that is liberal; from the Gay Activists, to the feminists, to the Anti-Iraq war protesters, the Jewish State is every liberals target. Yet Israel survives, and Israel will STILL survive despite her present ineffective leadership. With the grace of God and (as Bret Stephens points out below) through her determination Am Yisroal Chai, The Nation of Israel Lives:

Sixty years after its birth, Israel continues to test the proposition that reality counts for more than perception. The Web site eyeontheun.org keeps a running tally of all United Nations resolutions, decisions and reports condemning this or that country for this or that human rights violation (real or alleged). Between January 2003 and March 2008, tiny Israel – its population not half that of metropolitan Cairo’s – was condemned no fewer than 635 times. The runners-up were Sudan at 280, the Democratic Republic of the Congo at 209, and Burma at 183. North Korea was cited a mere 60 times, a third as many as the United States. 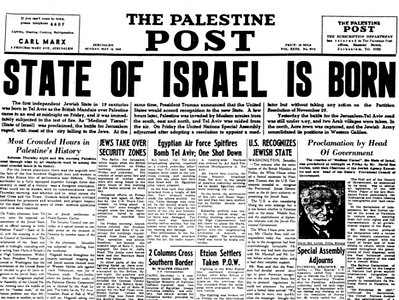 Is Israel the world’s foremost abuser of human rights? A considerable segment of world opinion thinks that it is, while an equally considerable segment of elite opinion thinks that, even if it isn’t, its behavior is nonetheless reprehensible by civilized standards. I would argue the opposite: that no other country has been so circumspect in using force against the provocations of its enemies. Nor has any so consistently preserved the civil liberties of its own citizens. That goes double in a country so constantly beset by so many threats to its existence that its government would long ago have been justified in imposing a perpetual state of emergency. For reasons both telling and mysterious, Israel has become unpopular among that segment of public opinion that calls itself progressive. This is the same progressive segment that believes in women’s rights, gay rights, the rights to a fair trial and to appeal, freedom of speech and conscience, judicial checks on parliamentary authority. These are rights that exist in Israel and nowhere else in the Middle East. So why is it that the country that is most sympathetic to progressive values gets the least of progressive sympathies? The answer, it is said, is that as democratic as Israel may be in its domestic politics, it is nothing but bloody-minded as far as its foes are concerned. In May 2002, at the height of the so-called al-Aqsa Intifada, I reviewed Israeli and Palestinian casualty figures, sticking to Palestinian sources for Palestinian numbers and Israeli sources for Israeli ones. Much was then being made in the Western media of the fact that three times as many Palestinians as Israelis had been killed in the conflict – evidence, supposedly, that despite the suicide bombings, lynchings and roadside ambushes perpetrated daily against Israelis, Palestinians were the ones who really were getting it in the neck. But drilling down into the data, something interesting turned up. At the time, 1,296 Palestinians had been killed by Israelis – of whom a grand total of 37, or 2.8%, were female. By contrast, of the 496 Israelis killed by Palestinians (including 138 soldiers and policemen), there were 126 female fatalities, or 25%. To be female is a fairly reliable indicator of being a noncombatant. Females are also half the population. If Israel had been guilty of indiscriminate violence against Palestinians, the ratio of male-to-female fatalities would not have been 35-1. These are not complicated facts. Yet the effort to think them through is rarely made. Is it laziness? I think not, because the image of demonic Israel, presented in copiously footnoted and ingeniously mendacious books like “The Israel Lobby,” is the product of a great deal of effort. Is it anti-Semitism? One dare not suggest it, since the standard by which anti-Jewish bigotry is judged today is considerably stricter than what is usually used in the face of allegations of racism, sexism or homophobia. But whatever it is, the constant assault on Israel’s morality has had its effect. Beyond Hamas, beyond Hezbollah, beyond the competition between Jewish and Arab numbers west of the Jordan River and the ever-growing number of Iranian centrifuges spinning a nuclear future for Mahmoud Ahmadinejad, Israel is beset by the fear that, being unloved, it is unworthy. “The anti-Semite makes the Jew,” said Jean-Paul Sartre, as if Jewishness was something conferred rather than practiced. A sibling notion, seemingly benign but insidious, is that Israel’s right to exist rests ultimately with the acquiescence of others, which in turn is a function of their perceptions. This is also known as “legitimacy.” Perhaps not surprisingly for a state that was born of a U.N. resolution (which the U.N. has never since ceased trying to disavow), Israel has been uniquely mindful of how it is perceived. Yet a nation that constantly feels the need to demonstrate its right to exist, rather than simply assert it, puts itself to an endless test, which it may someday fail. Then again, look at the headlines in the copy of the May 16, 1948, Palestine (later Jerusalem) Post, reproduced nearby. That was a nation in far greater peril than the one that exists today. For 60 years, it has survived mainly through courageous and improbable acts of assertion, yielding an unfolding set of realities that defied perception. It’s the only formula by which Israel’s next 60 years may be assured.