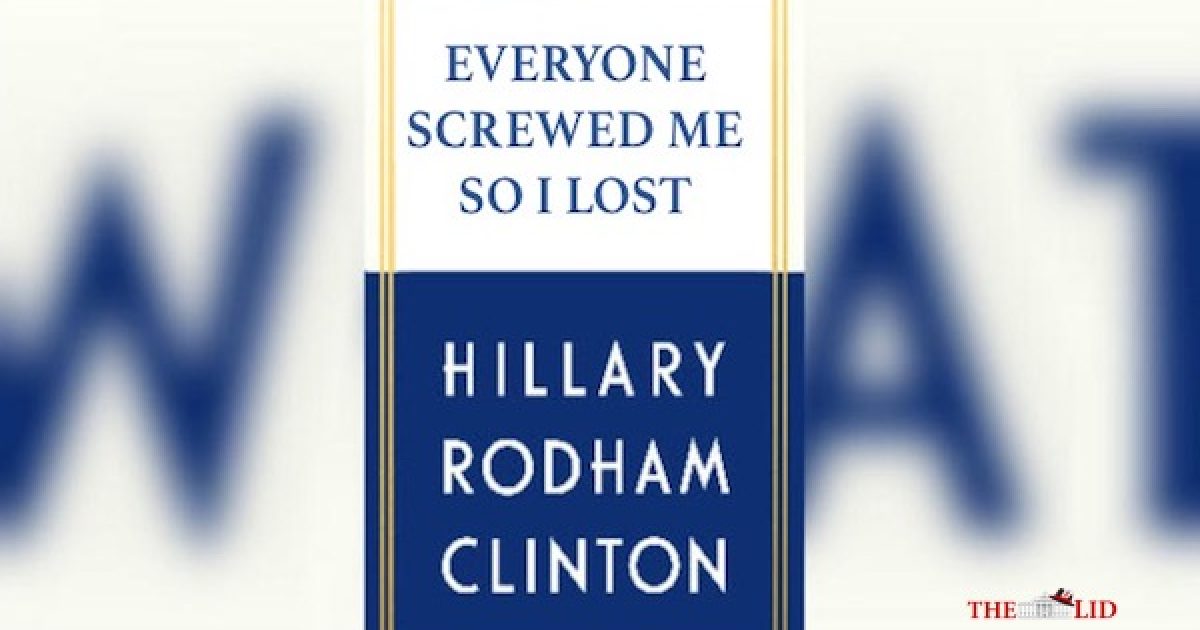 Hillary Clinton is an angry woman, but I am angrier than her because she used her new book to insult me personally. In recent days revelations from her new book, ” er, I mean “What Happened” have been sent to the press and it seems as if she has blamed almost everyone for her presidential loss.

We knew she was going to blame Former FBI Director James “The Leaker”, Comey and the supposed Russian collusion (which she helped to invent by paying a former British spy to come up with a Russia story, compiling it in what is now called “The Trump Dossier”). But based on the press reports the former secretary of state has gone mad with anger, blaming almost everyone, here are just a few:

Sorry Hillary, but if you want to blame anyone for people thinking you are crooked, I would blame whoever came up with the cockamamie You-Tube-Started-Benghazi lie, and Peter Schweizer whose book Clinton cash exposed that you used the state department to make Bubba and you rich.  I would also blame whoever convinced you to put an insecure mail server in your basement.

Bernie for his part came up with a good (but inaccurate) response to Ms. Clinton’s charges. Speaking to Stephen Colbert on the CBS “Late Show” Thursday he said, “Look, Secretary Clinton ran against the most unpopular candidate in the history of this country and she lost and she was upset about it and I understand that ”

“Throughout the primaries, every time I wanted to hit back against Bernie’s attacks, I was told to restrain myself. Noting that his plans didn’t add up, that they would inevitably mean raising taxes on middle-class families, or that they were little more than a pipe dream – all of this could be used to reinforce his argument that I wasn’t a true progressive. My team kept reminding me that we didn’t want to alienate Bernie’s supporters.  President Obama urged me to grit my teeth and lay off Bernie as much as I could. I felt like I was in a straitjacket.”

Actually Hillary….the straitjacket comment alerted me to the fact that you should feel like you are in a straitjacket today….because you are acting like you need a straitjacket. She also blames Obama for not speaking out more forcefully about the supposed Russian interference.

“I do wonder sometimes about what would have happened if President Obama had made a televised address to the nation in the fall of 2016 warning that our democracy was under attack. Maybe more Americans would have woken up to the threat in time. We’ll never know.’”

In her book Clinton writes:

“Now I was ticked off, NBC knew exactly what it was doing here. The network was treating this like an episode of ‘The Apprentice,’ in which Trump stars and ratings soar. Lauer had turned what should have been a serious discussion into a pointless ambush. What a waste of time,”

‘Joe Biden said the Democratic Party in 2016 ‘did not talk about what it always stood for – and that was how to maintain a burgeoning middle class.’ I find this fairly remarkable, considering that Joe himself campaigned for me all over the Midwest and talked plenty about the middle class.’”

Remember the Woman’s March the weekend of the inauguration? Hillary Clinton even found a way to blame them writing, ‘I couldn’t help but ask where those feelings of solidarity, outrage, and passion had been during the election” And speaking of women, she blamed her gender for her loss also, “What makes me such a lightning rod for fury? I’m really asking. I’m at a loss… I think it’s partly because I’m a woman.”

I am sure there will be much more fury leaked out as we get closer to the Books 9/13 release.  But it doesn’t matter anymore. Because I have been major-league, Guinness Book Of World Records level dissed by Hillary Clinton. Since this site was opened in January 2006, there have been 1,503 posts published revealing the true Hillary and exposing her for what she is a dishonest liar, who uses political office to enrich herself and her family, and who would run over her own mother for the chance to be the most powerful person in the world. This site has grown significantly over the years, plus I have a radio show whose opening song during the campaign was “Hillary Sucks” and a column in the Jewish Star. In other words, I too did damage to her campaign by telling the truth about Ms. Clinton.  But did she save any blame for me? Publicly Obama, Biden, Sanders, and those women marching all said nice things about her she blames them.  I, on the other hand, wrote about her deals with Russia and Haiti that enriched the family foundation, the truth about what happened in Benghazi, and how she hated Israel, and so much more..all of it true..yet she didn’t blame me even a bit!  I worked tireless hours to research and explain to America why Hillary should NEVER sit in the White House and I didn’t even get a “gee that Lid guy was a pain in the arse!” Do you see what I mean? I feel personally dissed.