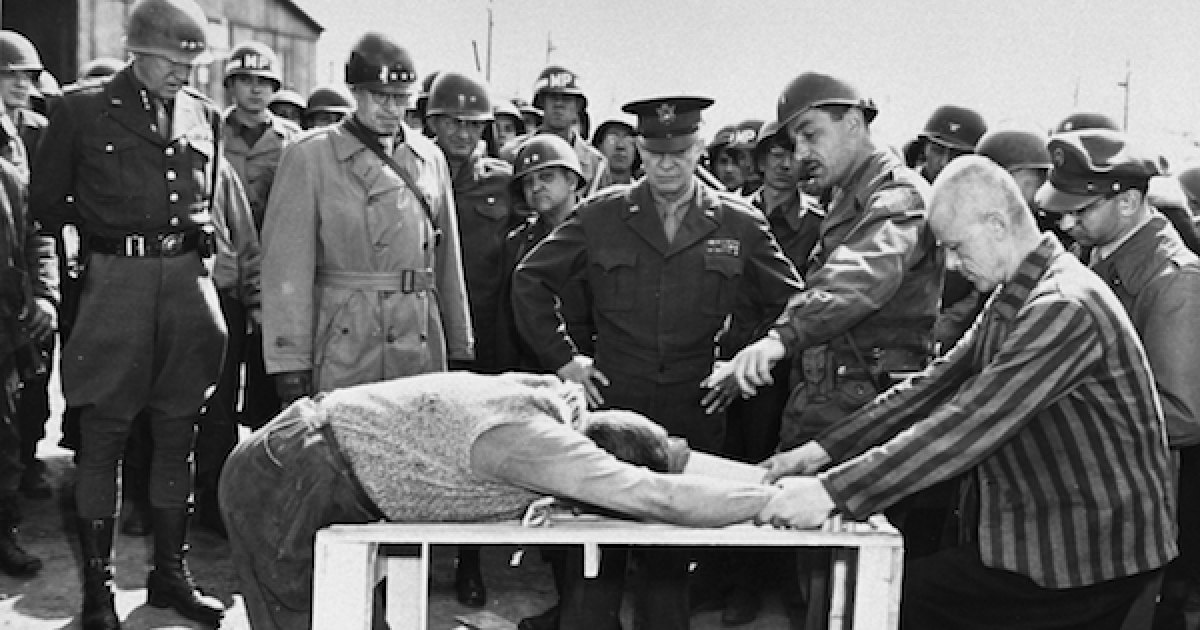 The war against the Nazis was almost over on April 4, 1945, when the of 354th Infantry Regiment, of the 89th Infantry Division, 3rd Army U.S.A., discovered the Ohrdruf Concentration Camp. While other countries might have ignored what was found there, that was not the American way.

On April 12th,1945, General Eisenhower decided to personally visit as the horrors of Ohrdruf Concentration Camp, bringing two of his senior Generals, Patton and Bradley along with military photographers. Anticipating that one day people will deny the Holocaust, Eisenhower wanted to document the horrors and have witnesses

Eisenhower also ordered every American soldier in the area who was not on the front lines to visit Ohrdruf and Buchenwald. He wanted them to see for themselves what they were fighting against. Members of the U.S. Army Signal Corps recorded approximately 80,000 feet of moving film, together with still photographs.

Eisenhower, Bradley, and Patton were horrified. The words of these battle-hardened generals are much more moving than anything I could say about the Holocaust.

General Eisenhower understood that many people would be unable to comprehend the full scope of this horror. He also understood that any human deeds that were so utterly evil might eventually be challenged or even denied as being literally unbelievable. For these reasons he ordered that all the civilian news media and military combat camera units be required to visit the camps and record their observations in print, pictures and film. As he explained to General Marshall, “I made the visit deliberately, in order to be in a position to give first-hand evidence of these things if ever, in the future, there develops a tendency to charge these allegations merely to ‘propaganda.’”

His prediction proved correct. When some groups, even today, attempt to deny that the Holocaust ever happened they must confront the massive official record, including both written evidence and thousands of pictures, that Eisenhower ordered to be assembled when he saw what the Nazis had done. 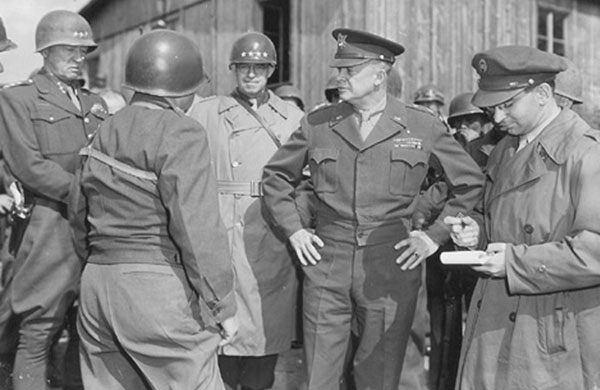 In a shed . . . was a pile of about 40 completely naked human bodies in the last stages of emaciation. These bodies were lightly sprinkled with lime, not for the purposes of destroying them, but for the purpose of removing the stench. When the shed was full–I presume its capacity to be about 200, the bodies were taken to a pit a mile from the camp where they were buried. The inmates claimed that 3,000 men, who had been either shot in the head or who had died of starvation, had been so buried since the 1st of January.

In Life Magazine, General Omar Bradley said of the atrocities at Ohrdruf:

. . .the most interesting–although horrible–sight that I encountered during the trip was a visit to a German internment camp near Gotha. The things I saw beggar description. While I was touring the camp I encountered three men who had been inmates and by one ruse or another had made their escape. I interviewed them through an interpreter. The visual evidence and the verbal testimony of starvation, cruelty, and bestiality were so overpowering as to leave me a bit sick. In one room, where they were piled up twenty or thirty naked men, killed by starvation, George Patton would not even enter. He said that he would get sick if he did so. I made the visit deliberately, in order to be in a position to give first-hand evidence of these things if ever, in the future, there develops a tendency to charge these allegations merely to ‘propaganda.’

Thankfully it was the American military who found the concentration camp. The horror of the senior generals was driven by pure human instinct, but Eisenhower’s insistence on bearing witness was driven by American values…that is what made America different then…and now.

Below is a clip of the news video taken of the Generals’ visit that day. It is graphic, but it should be watched nevertheless.