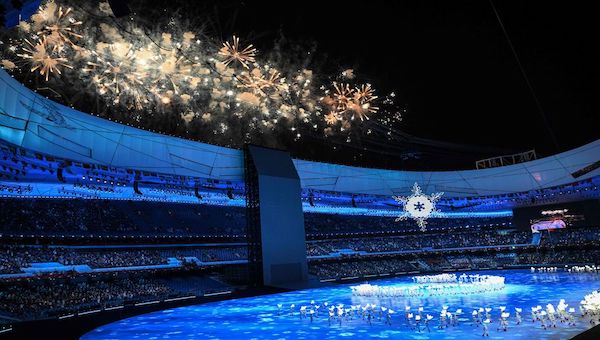 This was supposed to be the big coming-out party of Chairman-for-life Xi with his 100-year-old Communist Party. Instead, it’s turning out to be a massive faceplant and it’s hurting both NBC and the game’s advertisers.  for an Olympics

Even Putin can’t be bothered to stay awake for the ‘excitement’ of it all.

China’s Wuhan Wheezer boomeranged just in time for many Olympic hopefuls to find themselves quarantined in horrible conditions. By comparison, photos of the food visiting athletes have been given there make Michelle Obama’s nightmarish lunch program look like it had been designed by Jamie Oliver.

But conditions in isolation are reportedly dire. Valeria Vasnetsova, a Russian biathlete, claims she was served the same inedible meal three times a day for five days in a row – and that it left her so emaciated that her ‘bones [were] sticking out’.

Head of German team Dirk Schimmelpfennig also blasted ‘unacceptable’ conditions for his athletes, saying isolation rooms are too small, not hygienic enough, the food is poor and PCR tests that athletes must take to free themselves are not being given.

Natalia Maliszewska, a Polish speed skater, described being repeatedly moved into and out of quarantine over successive days due to conflicting Covid test results, an experience she described as a ‘trauma’ that left her ‘crying and crying’.

The attempt to use a token minority athlete to silence their human rights abuse critics fell flat, with the West recognizing it as the empty gesture it really was.

The whole experience is getting to be a dumpster fire.

But even the ratings themselves aren’t really worth a damn.

The #CCP is imprisoning over 1M Muslim Uighurs in forced labor camps used to produce products for the same U.S. corporations that preach social justice at home but sponsor the Genocide Games.

It's disgusting — and I'm proud to stand with @EnesFreedom to hold them accountable. pic.twitter.com/PJCrnKEF8k

When it comes to the ongoing Genocide Games (this year’s Winter Olympics in China), is bad news for the Chinese Communist Party’s image and reflects poorly on its sponsors. And so we note, with considerable schadenfreude, that the ratings for Friday’s Opening Ceremonies were down 43 percent versus 2018.  As of now, only ratings for the opening ceremonies are available, but since the opening ceremonies are usually the highest-rated part of the Olympics those numbers foretell a disaster for NBC.

The awful games are going to seriously hurt NBC financially and may hurt their ability to sell commercials for future Olympic games.

Corporations sponsor major events such as the Olympics or the Super Bowl etc., for two reasons.

First, associating with a significant and important event has a halo effect on a product. That is, it makes the product seem important. But with, the reported genocide of Uyghurs combined with the belief that COVID was created in the Wuhan labs has made association with the Beijing Olympics something that is more likely to have a damaging effect on a brand’s image.

The second reason is that it generates higher reach levels. More people will see a commercial simultaneously, giving your ad more impact than their usual fare. The lower ratings will hurt NBC financially (even more than Chuck Todd talking politics).

When a company buys commercials in advance, the network guarantees the total rating points their complete schedule will generate. For example, suppose a company buys 10 commercial spots, and the network promises those commercials will be placed in programs with an average10 rating (percentage of the population watching the program). In that case, the TV network is promising a total of 100 total rating points to the advertiser (10 x 10). However, if the program only gets a 6 rating, the network is short 40 rating points and must give the advertiser free ads to make up the difference.

Because TV commercials are restricted by a finite amount of time (they can’t change an hour from 60 to 65 minutes), every free ad reduces the number of paid commercials they can sell. Therefore the TV network will fall short of the money they promised their corporate owners. In the case of NBC, that owner is Comcast. With a major event, the projected number of ratings is relatively high compared to their usual fare. The promised rating points will be higher. The network will probably have to replace those underperforming Olympics ads with more commercials in regular lower-rated programs, exasperating the loss of commercial time they can sell. Thus. creating a gap between the income promised to their corporate ownership and what was actually delivered,  Having worked for many media companies, I can assure you that corporate ownership freak out when promised income levels are not met.

To make matters even worse (from Xi’s perspective, anyway), a female figure skater defected from America and gave up her US citizenship to compete for Beijing… only to finish dead last. Worse still, she pulled down the team standings with her.

The American-born Chinese figure skater who gave up her US citizenship to compete for China at the Winter Olympic in Beijing was left in tears after falling again in the women’s short program team event today.

Beverly Zu, 19, who changed her name to Zhu Yi to compete for the Communist country, finished with the lowest score of the event at Beijing’s Capital Indoor Stadium yesterday after she failed to land a jump and fell on the opening combination, and botched another jump later in her short program.

Today, the figure skater, who has faced widespread scorn from many in her adopted country, broke down in tears on the ice after falling again in the free skate – the final event in the team competition.

It comes just a day after Zhu was branded a ‘disgrace’ by fellow countrymen for finishing last and knocking China from third to fifth place in the team event.

What would get Xi’s party even more wrapped around the axle? This excellent depiction of Xi’s totalitarian regime will make more people understand the horrible human rights violations from the tyrannical Communist China government.

UPDATE: Ed Morrissey has a different and must-read take on the Olympic ratings at Hot Air. Click here and give it a read, it will be well worth the time.

horrendous ratings for an Olympics

horrendous ratings for an Olympics