The Town That Honors Fallen American Heroes 365 Days A Year 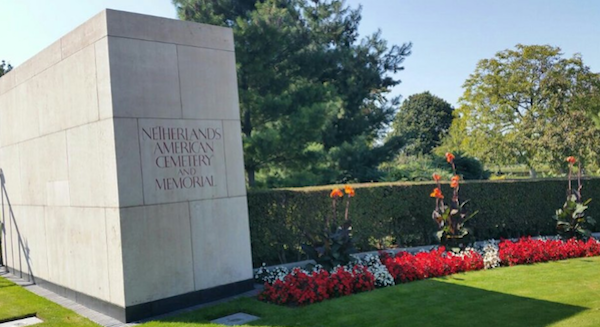 This is the one day a year that we pause to honor, remember and celebrate all of those American heroes that have fallen in battle defending our greatest blessings….freedom and liberty. We know that their sacrifices paved the road we travel today and have kept the gate open for the future of those that follow us. At times we get so caught up in our own activities it’s far too easy to put the reason for days like this on the ‘back burner’ and concentrate on unwinding and fun with family and friends. Even the wildest imagination cannot possibly describe what our extraordinary soldiers of yesterday saw as ‘fun’! Their stress level rises so far above anything you and I ever experienced, it’s out of sight!!!!  The United States sets aside a single day for all of us to remember and honor these brave men. I’d like to share with you a part of the honor a foreign nation regards our fallen of World War II.

There is a town that honors these American Heroes 365 days a year and it isn’t even in our Country !!! It is in one of the sixteen foreign countries that dedicated consecrated land to the American Military that will never return to their families and homeland. They have provided the final resting place for more than 125,000 American souls of World War II.

This town is Valkenburg, Holland. It’s a pristine and rather quaint small town where the merchants actually scrub the sidewalks in front of their stores each day. Valkenburg was the very heart of the Nazi controlled area battling the 101st Airborne Division of the American Army. The Citizens formed the “Dutch Resistance” and they literally carved out a huge cave in the limestone beneath the town with ‘secret’ entrances in several of the houses. The townsmen took turns staying above ground to not only avoid arousing the curiosity of the Nazi’s, but also to ‘secret’ supplies and food to the others. This ‘town below the town’ had its own fresh spring and ventilation system that kept the smoke of cooking from being detected. The kitchen area still has soot on the walls above the stoves.  Most of the Dutch are practicing Catholics and there is even a ‘Confessional’ carved in the walls. It was at great personal risk that they brought our wounded to the cave. The rooms where they cared for our wounded have names, dates and hometowns cut into the walls with bayonets or written in charcoal by the soldier. They buried our dead under the cover of darkness when possible, taking care to ‘map’ each location with the rank and name of the soldier.

Each Memorial Day the 3rd Armored Division Band from its post in Frankfurt/AM Germany is invited to participate in their two day celebration. This is the one trip wives are authorized to join as part of the American entourage and what a trip it was!!!

Our bus was met at the outskirts by an official escort . As we wound our way through narrow streets we saw American Flags displayed by the merchants and people on the sidewalk waving as we passed. After a lavish cocktail hour and beyond words banquet, we (wives) were driven by the Burgermeister’s (mayor) wife to the concert hall. Here the ‘local’ band joined in with ours for the concert… the first song was our “Star Spangled Banner”!! And they all stood with hands over their hearts!!!  WOW, talk about your chest swelling with pride.

The celebration continued the next morning at Margratan American Cemetery. We walked from behind the Bell Tower to where the ceremony is held. The view is beyond spectacular! There are 8301 sparkling white crosses as far as you can see, each with a small American Flag beside it. The steps are lined in red, white and blue tulips that lead to the enormous granite tower base with each soldier’s rank and name.

This is where the 365 days a year starts. In 1945 they started an organization “ADOPT-A-SOLDIER.” Each family in the town has adopted the grave of a soldier and maintains it year around. They make sure the grass is cut. Sometimes they bring flowers or just ‘visit’ and pull out a stray weed. They bring the children and tell ‘their’ stories over and over… from one generation to the next. The ‘adoptee’ remains a part of that family for all time.

My trip was many decades ago, my memory is like yesterday.  A few years ago, old friends of mine vacationing in the area timed their trip to be in Valkenburg on Memorial Day and told me it is the same.

I know everyone is packed and ready to trek to the cool mountains or sunny shore beaches for three days of ‘away from it all’.  Perhaps this is a story you can share along the way.  After all, without our brave men and women going into harm’s way… not asking what ‘political party’ you belong to… they know we are all Americans and blessed by those that have gone before.

With the sound of ‘Taps” echoing in my ears, I remain grateful for this “One Nation Under God.”

Crossposted From The Real Side