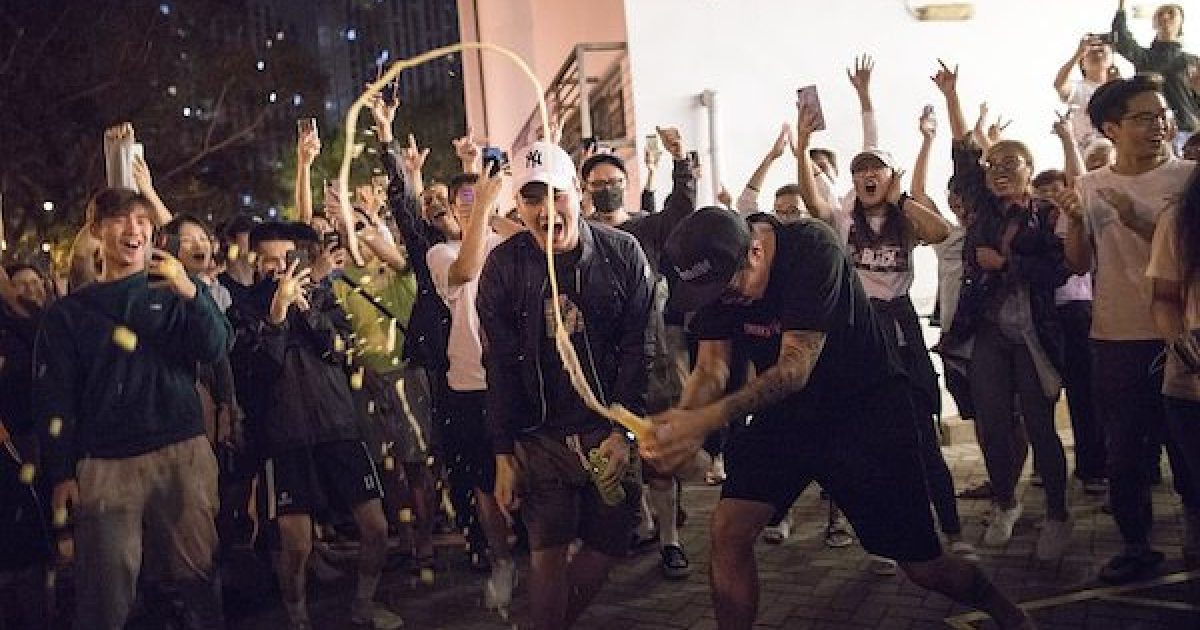 Hong Kong’s pro-Democracy candidates coasted to a massive 90% win in Monday’s elections  The city’s overlords in Beijing, China were not as happy. They reminded Hong Kong who their rulers were. Hong Kong elections

The only district to go pro-Beijing was the Island district, 8 of their 10 seats are automatically given to pro-government candidates.   Universal voting rights are one of the demands of the pro-democracy movement. These elections were for local districts, and those who won them have little power. Beijing claimed that there was no such thing as a “silent majority” – the elections proved them wrong.  The results did send a loud and clear message to Beijing: they want democracy. Many took to champagne to celebrate the victories.

“The anti-government anger boiling up over nearly six months of protests made its mark in polling stations across Hong Kong on Sunday, when voters turned out in their droves to back the pan-democrats over their pro-establishment rivals.
By noon on Monday, the pro-democracy camp seized 17 out of 18 district councils, taking more than 340 of the 452 seats. All councils were previously under pro-establishment control after its candidates dominated the 2015 elections.
Islands district – which has 10 elected seats and eight given automatically to pro-establishment rural chiefs – was the only one held by the pro-Beijing camp.”

The Hong Kong elections revealed a 71.2% turnout- the largest since 1999. They basically threw a giant middle finger to the Communist regime in Beijing. But with the Communists still in charge of Hong Kong, it will take more than election results to make a change. The road ahead is long – the battle is not over. Especially because the councils have limited powers, only a small budget and a mandate restricted to hyper-local issues such as parks, bus stops, and waste collection.

Major decisions are made by Hong Kong’s chief executive, who presently is  Carrie Lam. Hand-picked to rule by party leaders, Lam always insists she rules independently but is widely accepted that her city management is coordinated with China’s top leadership in Beijing.

On Monday Lam took a more conciliatory approach, promising to respect the election results and “listen humbly” to the views of the public. Refusing to compromise would almost certainly inflame residents and protesters further, nearly six months into a deep political crisis.

In a reminder of the protesters’ commitment and the volatile situation, by Monday evening a crowd had gathered outside the Hong Kong Polytechnic University, where a handful of protesters were still under siege by police.

A group of newly elected pro-democracy councillors went to meet them inside, making their first public act after the election a clear statement of political intent.

China was not pleased, foreign minister, Wang Yi told reporters, “No matter how the situation in Hong Kong changes, it is very clear that Hong Kong is a part of Chinese territory,”

The biggest issue with this result is that the Communist government of China may make it nearly impossible for the newly elected members to fulfill their campaign promises IF they don’t immediately crack down on the winners. Pro-Beijing forces do not like the pro-democracy movement and have been vocal against them, …not to mention violent.

Hopefully, Chinese leaders will find a way to reconcile with the freedom movement that gave them an electoral slap in the face.